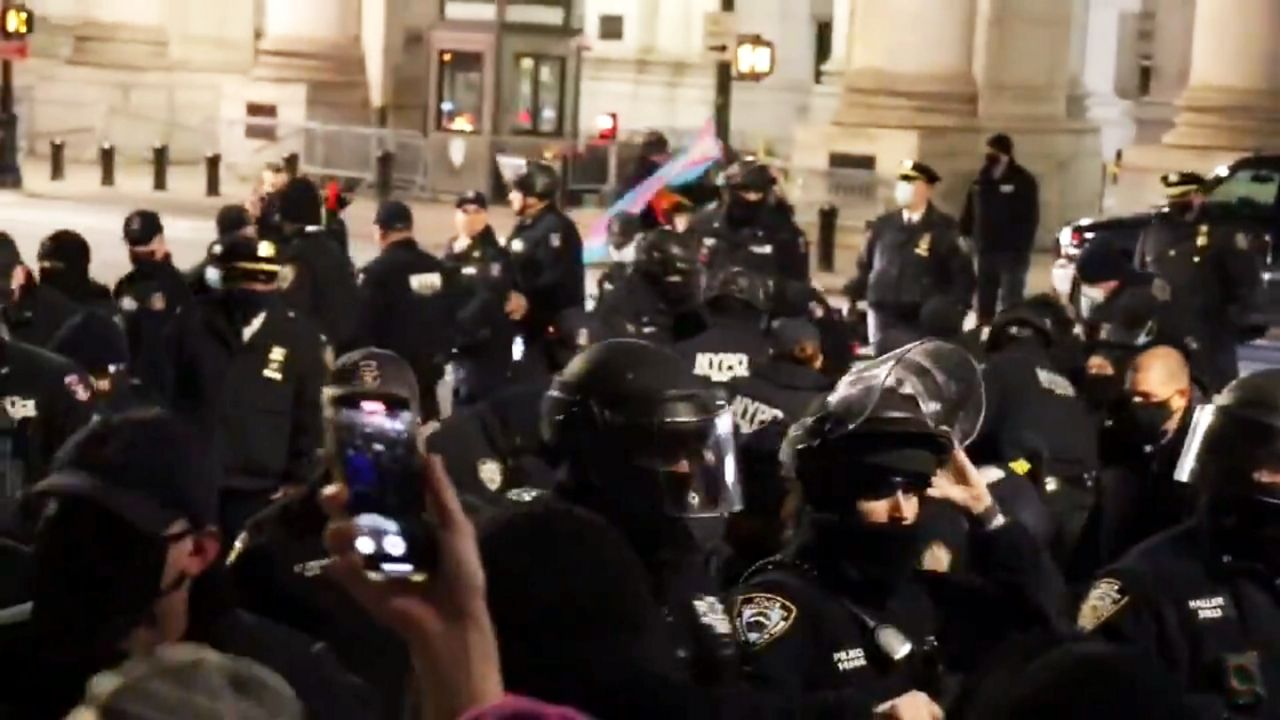 NEW YORK — A march to honor the life and legacy of Dr. Martin Luther King Jr. ended in a violent clash with police Monday night after making its way from Brooklyn to City Hall.

Demonstrators taking part in the Black Liberation March were calling for racial and social justice as they remembered Martin Luther King Jr.

Shea pushed back against claims that demonstrations were peaceful.

“This isn't actions that are caused by police officers so that's a news flash for the AG. This is actions caused by people that want to destroy our way of life and our city and we're not going to let it happen,” he added.

In a statement released Tuesday, Sgt. Edward Riley, a spokesperson for the NYPD, said that the clashes started after police formed a protective ring around a bystander filming the protests who was being “harassed” by protesters.

“Officers who formed a circle to protect and remove her then had glass bottles thrown at them,” Riley said. “Other officers used a public address system to give clear, audible directions for protesters to leave the roadway.”

Videos from the scene taken by protesters purported to show NYPD officers targeting protesters at random for arrest.

In videos posted to social media, a pre-recorded police message could be heard warning protesters to get out of the street or they would be arrested.

On Tuesday morning, Mayor Bill de Blasio said at a press conference that, although he had seen videos of the clashes, he did not have details about what happened.

In response to a question from a reporter, he said it would be “reasonable” to have the NYPD explain the specific legal bases for each of the 29 arrests beyond the boilerplate legal language often included in complaints against protesters arrested for crimes like disorderly conduct.

“We’ll certainly get an accounting to folks,” he said.

When asked why the arrests occurred, de Blasio said, “It was in close proximity to City Hall, and that was obviously a concern after what happened at the Capitol just 12 days ago.”

The document, made public on Friday afternoon, does not contain specific guidelines for protest response, and includes sections on excessive force, abuse of authority and false or misleading statements.

“I think it's going to give the public confidence, and it's going to send a message to everyone who works for NYPD, to do things the right way. and I think that's really gonna be good for trust between police and the community,” he said.

The protest started at the Barclays Center in Brooklyn but turned violent as the crowd crossed the Brooklyn Bridge and approached City Hall.

The Barclays Center has been a popular gathering spot for Black Lives Matter demonstrations ever since the death of George Floyd last summer.

Of the 29 people arrested, Riley said, 21 received summonses for disorderly conduct, a misdemeanor, while seven received a desk appearance ticket and one woman had her arrest voided.

This latest clash follows the state Attorney General Letitia James' announcement last week she is suing the NYPD over what she called excessive force against people protesting the death of George Floyd last year. She’s calling for a federal monitor to oversee the department.

"Less than a week after I filed a lawsuit against the NYPD over these very exact issues, we saw officers exhibit the same behavior," James said in a statement.