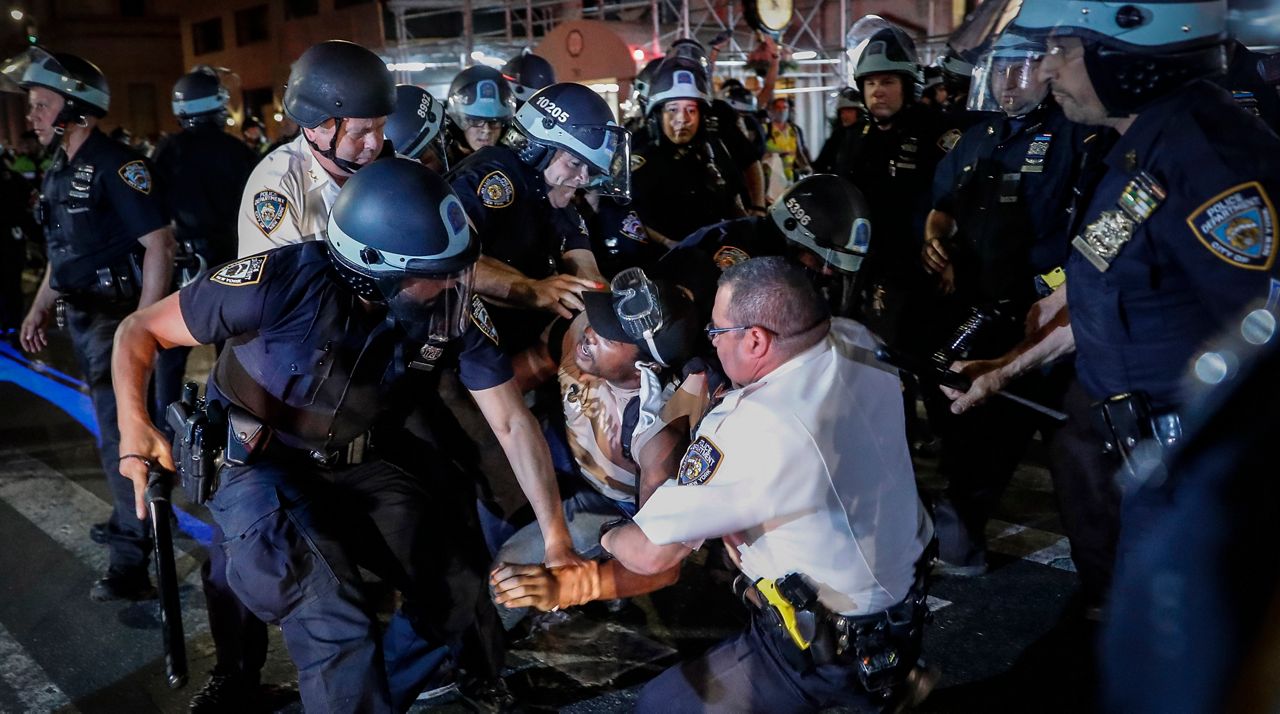 The lawsuit comes after the AG’s office found widespread civil rights abuses by police against Black Lives Matter protesters over the summer. That investigation documented 155 incidents of excessive or unreasonable force.

#BREAKING: I’m filing a lawsuit against the New York City Police Department to bring an end to its pattern of repeatedly and blatantly violating the rights of New Yorkers.

No one is above the law — not even the individuals charged with enforcing it.

"They used grossly excessive force, including unjustifiably deploying pepper spray, batons, bicycles and even using their fists against protesters," James said at a press conference announcing the lawsuit.

According to the attorney general, the lawsuit "specifically charges the NYPD, the City of New York, Mayor Bill de Blasio, NYPD Commissioner Dermot Shea, and NYPD Chief of Department Terence Monahan with failing to address this longstanding pattern of abuse by not properly training, supervising, and disciplining officers to prevent misconduct, despite knowledge and public admission that it violated the rights of New Yorkers."

"It is my responsibility and my duty to uphold the First Amendment and the right for individuals to exercise their right to protest," James said. "And that's what this complaint is all about. It is about the rule of law and ensuring individuals no matter how powerful they may think, that no one else above the law."

🚨NEW: @TishJames is filing a lawsuit today against the NYPD seeking to install a federal monitor to oversee the department. The suit stems from the #BlackLivesMatter protests over the Summer. The AG’s office found widespread civil rights abuses by police against protesters.

This marks the first time in state history the state attorney general has sued the NYPD.

The move follows scathing reports by the city Department of Investigation and Law Department that found the NYPD abused authority, used excessive force, had insufficient training and First Amendment issues during the protests.

As AG @TishJames is expected to recommend federal monitor for #NYPD, the department already has a federal monitor overseeing its stop, question and frisk practice. In 2013 a federal judge ruled cops violated the constitutional rights of #Blacks and #Hispanics with stop & frisk.

Hundreds of people have said their constitutional rights were violated when they were abused, injured or wrongfully arrested.

"I was struck from behind with a baton," said protester Luke Hanna. "And I touched my head and my hands were covered in blood."

James said cops illegally arrested medics and legal observers. Hospital worker Rayne Valentine says he was simply recording what he thought was police abuse when he says he was attacked by multiple cops.

"They left me on the ground with blood streaming down my face," Valentine said. "I went back to the hospital where I work and had to get seven staples to close the gash in my head."

Keith Clingman, who spoke with NY1 reporter Shannan Ferry, says his arm was fractured when he was shoved to the ground by the NYPD during a Black Lives Matter protest on September 12.

It appears in the video of the incident, Clingman was pulling fellow demonstrator Kimberly Bernard away as she was being arrested.

“The force that I was met when it happened was truly unrecognizable,” explained Clingman. “One second I’m standing there, the next second I’m flying through the air and landing on my arm.”

Clingman and Bernard were not surprised a lawsuit by State Attorney General Letitia James seeks a federal monitor for the police department, alleging abuses by officers against protesters.

Bernard says she was arrested with excessive force in front of the 34th Precinct, but she's doubtful James’ proposal will lead to any long-term systemic change.

“His cuffs were so tight that my wrists were swollen for days. He had such a tight grip of my arms that my arms were bruised for days,” Bernard said of the experience. “It’s a day late and a dollar short. There was extreme violence happening in the early stages of this movement and it continued the entire year.”

But Clingman doesn't have faith in those reforms, telling us he still experiences pain in his arm and is in physical therapy.

“Although it is nice to see the spotlight put it on the harm, I can’t say I’m confident this will lead to change,” Clingman said.

“What we want to see is police officers losing their jobs, we need strong messages to be sent to these officers that you do not get to infringe on people's first amendment rights in this way.” Bernard said.

Clingman and Bernard say they are also currently pursuing their own individual lawsuits against the NYPD.

The NYPD released a statement on Twitter saying the "Department welcomes reform and has embraced the recent suggestions by both the city's Department of Investigation and the city's Law Department," while noting that "adding another layer does not speed up the process of continued reform."

The New York City Police Department welcomes reform and has embraced the recent suggestions by both the city's Department of Investigation and the city's Law Department. pic.twitter.com/OT9isx03U7

The NYPD already has a federal monitor overseeing its stop, question and frisk practice. In 2013, a federal judge ruled officers violated the constitutional rights of Black and Hispanic New Yorkers with the policy aimed at getting illegal guns of the city's streets.

Pat Lynch, the president of the Police Benevolent Association, blasted the attorney general's call for a federal monitor, saying "We will say it again: what we witnessed in June was a failure of New York City's leadership. They sent cops out to police unprecedented protests and violent riots with no plan, no strategy and no support. They should be forced to answer for the resulting chaos, instead of pointing fingers at cops on the streets and ignoring the criminals who attacked us with bricks and firebombs."

In an interview with NY1 following the breaking news of James' lawsuit, Frederick Davie, the chairman of the Civilian Complaint Review Board, spoke of police accountability.

"Until the public feels that there's real accountability for the mistakes and the infractions that the NYPD makes the trust of the public will continue to be less than what we want it," he said.

Davie was a guest on “‘Mornings on 1” to discuss proposed new rules that would enable the CCRB to investigate sexual misconduct claims against NYPD officers and allegations of false official statements made by police against civilians.

The @CCRB_NYC hosted a hearing on proposed new rules that would enable it to investigate sexual misconduct claims against NYPD officers and allegations of false official statements made by police against civilians. Chair Frederick Davie discussed police accountability with NY1 pic.twitter.com/B8oSaJ8iWz