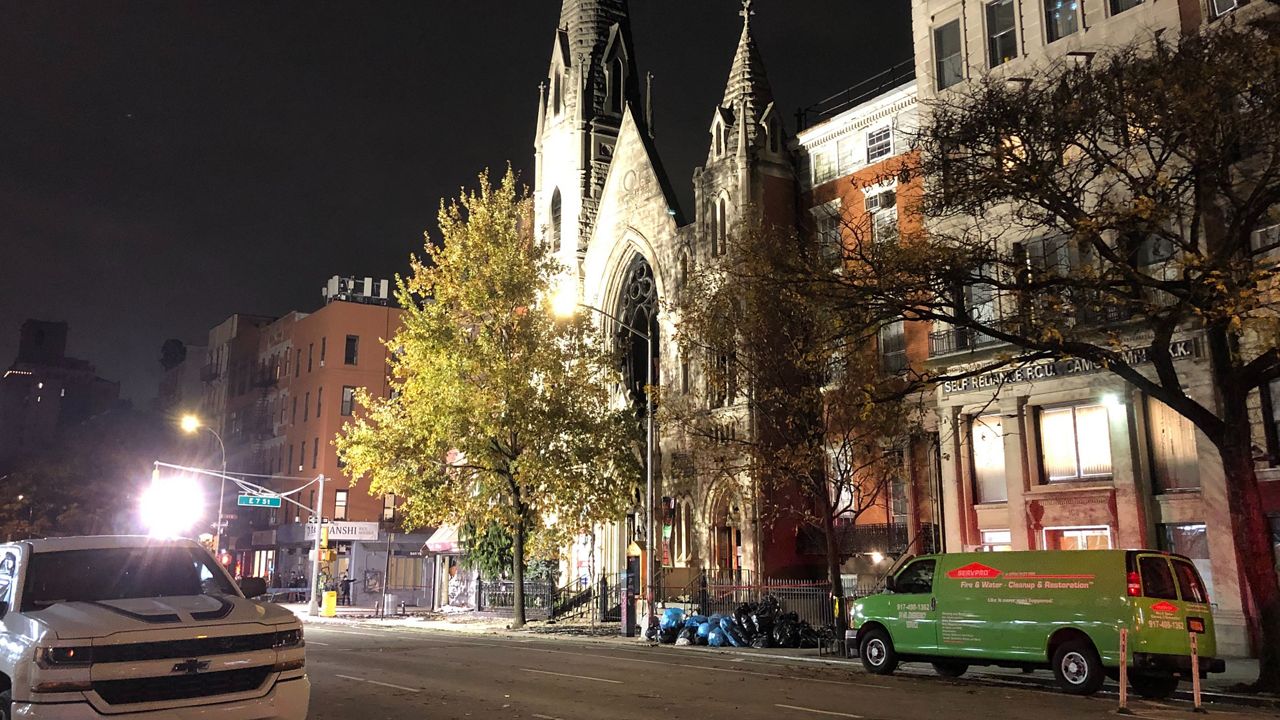 NEW YORK - A historic East Village church was destroyed after a fire broke out in a nearby vacant building early Saturday morning.

“I would consider it to be very heavy damage," FDNY Assistant Chief John Hodgens said at a news conference. "It’s going to be a difficult time for them to rebuild.”

More than 200 firefighters responded to the six-alarm fire, which started shortly before 5 a.m. on the first floor of a building at 47 East 7th Street.

It then spread to the 128-year-old Middle Collegiate Church, causing its roof to collapse. The fire also spread to another building on 7th Street where the blaze was contained after it started.

Second Avenue between East 6th and 7th Street are currently closed to pedestrians and cars due to concerns about the stability of the buildings, according to officials.

“I was crying, actually I was crying while I was shooting it,” said Devlin Shadow, who lives a few buildings away from the vacant building that caught fire and captured the destruction on his camera. “I saw people running out to the street and the building. It looked like the end of the world.”

In a Tweet, Mayor Bill de Blasio weighed in on the fire early Saturday afternoon, pledging that the city will do whatever it can to help rebuild.

“Heartbreaking. Middle Collegiate is such an icon of the East Village. I can’t count the number of times I walked past it and took in its humble beauty. @FDNY is continuing operations on the scene. We’ll do whatever we can to help Middle Collegiate rebuild.”

"What we have found out is that we're going to lose this church, this is going to be demolished, it's not going to survive the fire,” City Council member Carlina Rivera told NY1.

Church leaders said they are devastated by the destruction.

“We are gutted. Our building is gutted. We are sad. We are hopeful. But we are here. No one died, thanks to God," Reverend Jacqui Lewis, senior minister of Middle Collegiate Church, said.

We are devastated and crushed that our beloved physical sanctuary at Middle Collegiate Church has burned.

And yet no fire can stop Revolutionary Love. pic.twitter.com/R8D3NVjAiY

According to the church’s website, the building features a large Tiffany skylight dome and more than a dozen Tiffany windows.

The website indicates it’s “the oldest congregation of the Collegiate Churches of New York” and the “the oldest corporation in the North America, established by royal charter from King William III of England in 1696.” Deeming itself as one of the “leading multicultural, multiracial congregations in the United States,” supporting LGBTQA+ and marriage equality.

Elizabeth Patrick said she watched the chaotic scene play out from East Village apartment window, praying for a miracle that didn’t come.

“Whenever I was depressed, I went in there and I always felt so much better,” Patrick said. “There’s a special feeling you got from just being in there. So beautiful and peaceful. I loved it. I’m so sad.”

At a prayer vigil held virtually Saturday night, religious leaders from other churches joined devout members of the Middle Collegiate Church for an hour of reflection.

“Remembering that a church is not a building, and yet buildings matter,” said Reverend William Critzman, senior pastor of the West End Church.

“I lost my daughter recently, my youngest daughter, and this is a double whammy, losing the church,” said one woman who joined service. “But I know all the people make the church, so we’re all still here.”

Reverend Lewis told NY1 losing the building they have occupied since 1892 is devastating, but it will not stop their ministry, and virtual services are set for Sunday.

“That was our fourth building. We’ve been the collegiate church since 1628; 1628, the oldest continuous Protestant Church in North America, the longest worshipping community in this nation and the oldest corporation. We’re not going anywhere.”

The vacant apartment building also caught fire in February, according to the FDNY.

As of this writing, firefighters are still on the scene.

The cause of the fire is being investigated.