This Is What Tourism Looks Like In NYC Right Now

Martin Blaine’s 10-year-old son is a big "Hamilton" fan and knows all the songs. Then he watched the animated musical series "Central Park," and New York City started to become a major theme in their Ohio household.

The family of three stayed home most of the year, except for a trip to Arkansas for a family funeral. But with Martin and his wife’s anniversary in July and his wife’s birthday in September, they decided they could swing a short fall trip to celebrate the occasions without their son missing too much school.

“We were like, ‘Why don't we just go to New York?’” he said. “And then we were, like, ‘Well why would we go to New York? There's nothing to do in New York.’ But we looked around and there were still lots of things to do.”

One of those things was Broadway Up Close, a tour of Broadway’s theaters detailing the history and inner workings of everything it takes to put on a big show. 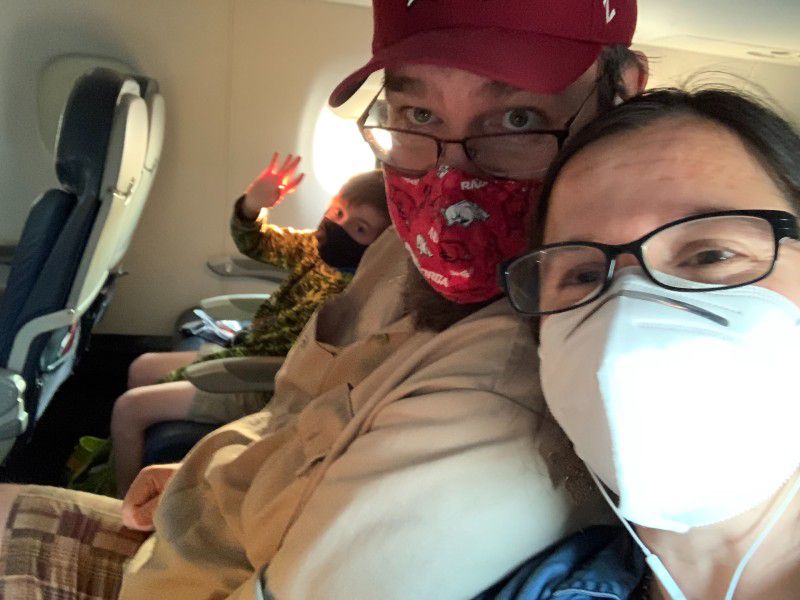 The Blaine family said their flights to and from New York were nearly empty. (Courtesy: Martin Blaine)

Tim Dolan, the founder of Broadway Up Close, has been bustling harder than he has since he founded the company in 2010, he said. His tour company and gift shop rely on tourists attending New York City’s theaters. And in 2020, that’s not happening.

On March 12, all 41 of New York City’s theaters closed their doors. They’re not expected to open back up until June 1, 2021 and, even then, there’s still uncertainty around which theaters will open at that time. With the reopening date pushed back multiple times thus far, many people in the industry think the reopening is more likely to take place closer to September of 2021.

This means that people who work in the tourism industry, like Dolan, have had to completely revamp the way their businesses operate in order to stay afloat.

In 2019, NYC tourism hit a record high—66.6 million individual trips with about $47.4 billion generated in direct spending for the city, according to the 2019 NYC & Company annual report. But by the end of 2020, tourism is expected to drop by about 66% to 22.9 million visitors, according to NYC & Co. It’s not expected to reach pre-pandemic numbers until 2025.

Before COVID-19 hit, the majority of Dolan’s profits came from the six in-person tours his company offered. Five of these were walking exterior theater tours and one tour included a visit inside the Hudson Theater.

“When the shutdown started, I refunded more money than I've ever refunded in my entire life,” Dolan said. “You feel the life slipping through your fingers.”

Dolan, an actor by trade, started his company understanding that working in the industry often means relying on an unpredictable stream of income. It’s why most of his staff are young actors themselves. But when COVID-19 hit, he had to furlough his 22 employees. Now the business  operates with a staff of two—Dolan and a graphic designer who freelances for him.

In April 2019, he opened a brick and mortar shop across the street from the Minskoff Theatre, home to "The Lion King" musical. In the shop, people could buy typical Broadway-themed souvenirs, like t-shirts, hoodies, tote bags and keychains. He’s been able to hold on to the store despite its closed doors with support from the Times Square Alliance, the site's owner. 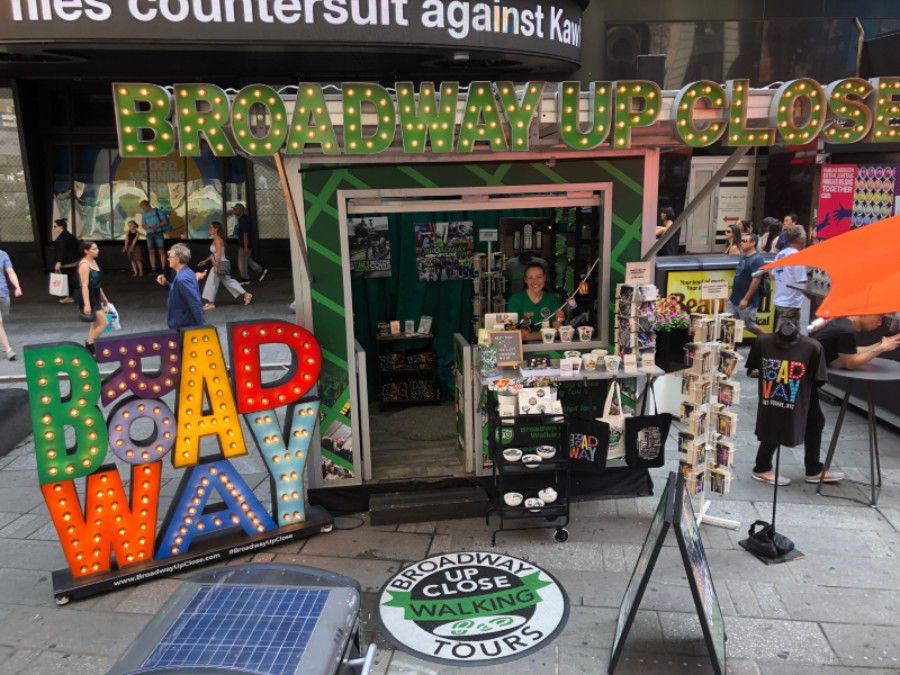 The Broadway Up Close gift shop is in the heart of Times Square, across from the Minskoff Theater. (Courtesy: Tim Dolan)

Not only did he take the entire gift shop online for the first time, but he also had to reimagine the type of merchandise he could sell. Most people aren’t interested in buying souvenirs for trips they haven’t taken.

“We have no tourists. We have no Broadway shows. We're not making any new New York memories or theater memories, specifically,” Dolan said, describing his thought process. “Let's cherish the ones that we've already created.”

That’s when he came up with the idea to do custom ticket stub souvenirs. Customers can input information from a ticket stub, like the name of the theater, the date and time, cost, and seat number, and Dolan creates an engraved ticket stub made of cherry wood.

“I'm making all of that literally in my apartment,” he said about the new types of merchandise he’s selling, including handmade wooden picture frames and ornaments. “Other than a tote bag, a t-shirt, and a magnet, I thought, ‘What else can we do to change the merchandise game while we have this moment of time that I might not have had otherwise?’”

But tours are still happening.

After taking some time to deal with those massive refunds at the onset of the pandemic, he decided he wanted to take his tours online. He started by putting videos on his company’s Instagram account. Then Playbill reached out to collaborate to do Zoom-hosted tours. It then evolved to Dolan doing his own virtual tours. 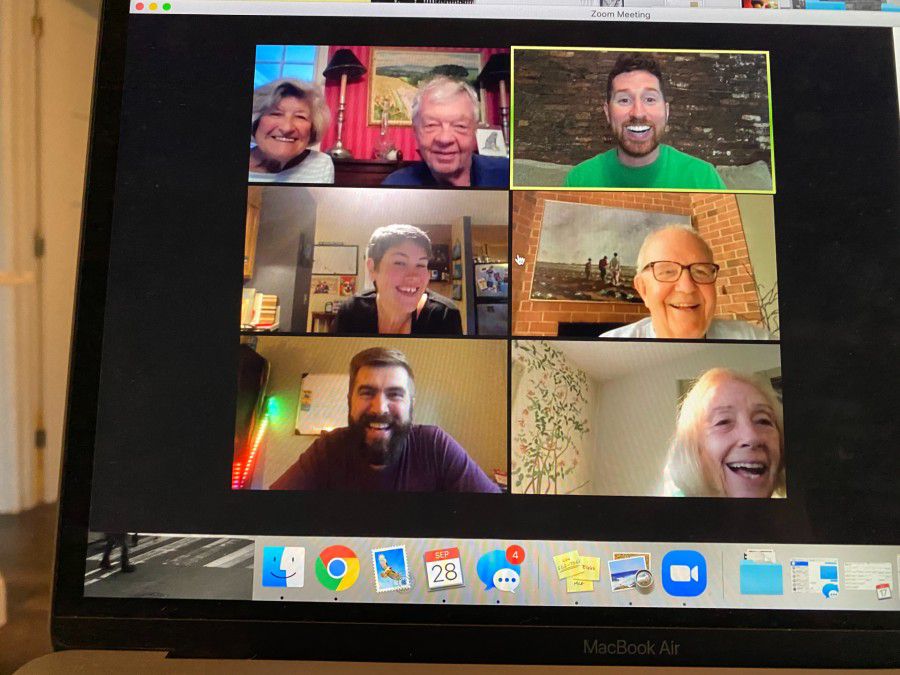 A screenshot from one of Tim Dolan’s virtual Broadway tours. (Courtesy: Tim Dolan)

“We've garnered people from all over the world,” he said. “I just did one yesterday, and she was like, ‘It’s 4 a.m. here in Australia. Thanks for keeping me awake.’ I didn’t realize that.”

His company used to do about 10 to 14 tours a week. That number’s gone down to about one to three a week. And with out-of-state tourism down drastically, the clients he serves are almost all locals.

“I just kind of put it out there,” Dolan said. “For any New Yorkers who are bored in their studio apartments and want to get out for a minute—it's totally safe. Let's hang out in Times Square. There's no one here.”

But locals aren’t the only customers he takes on his in-person tours.

Every so often he gets out-of-towners like the Blaine family from Ohio, who visited at the end of September for four days. Currently, the quarantine guidelines for people arriving from out-of-state require people to get tested within three days of leaving for New York and after three days of quarantining in the city. If they test negative both times, they can bypass the 14-day quarantine. Even with an option for a three-day quarantine, this can make tourism difficult for people like the Blaines who did not quarantine on their brief trip.

The family figured that they’d keep the trip fairly simple—walk around, relax, and check out Central Park for the few days they were in town. But Martin, his wife, and son were surprised at how full of an experience they were able to have. 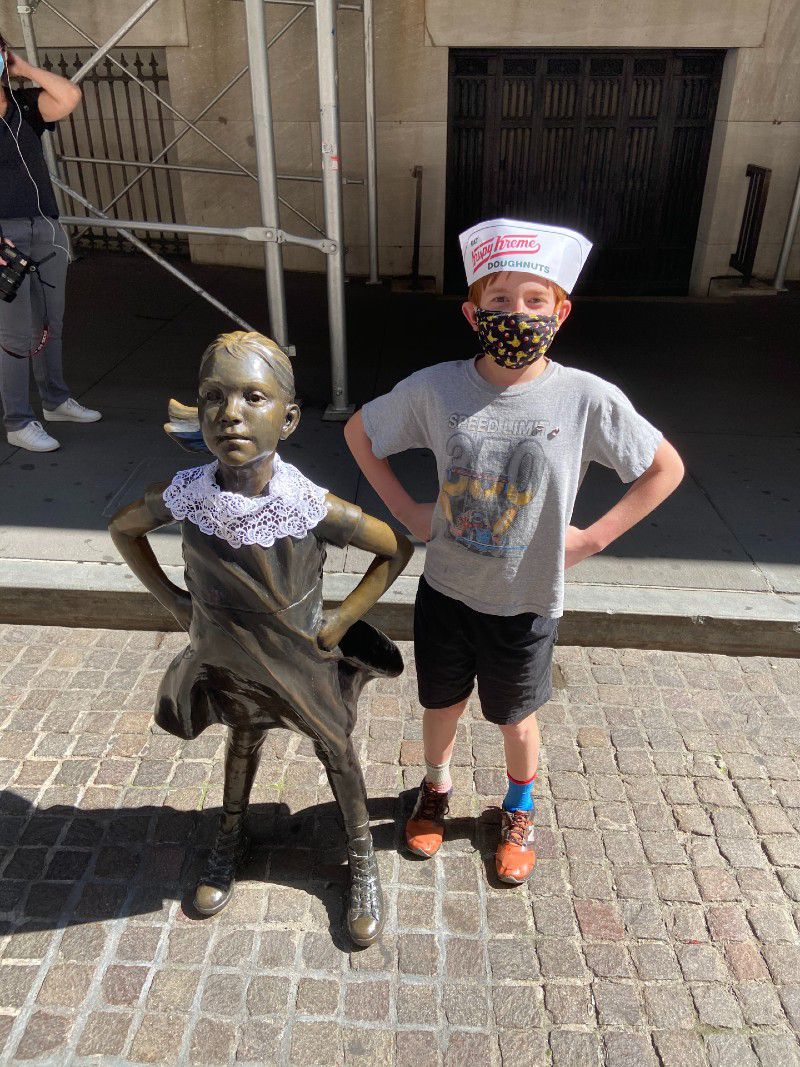 Blaine’s son enjoyed the family trip so much that he said he wants to live in NYC when he gets older, his father said. (Courtesy: Martin Blaine)

“For the month after we left, my son kept saying ‘I'm going to move to New York when I get older,’” Blaine said over the phone in November.

Other than the huge crowds, sporting events and Broadway shows, the Blaine family was able to see and do most of what they would want to do on a normal New York City vacation, including the Broadway Up Close tour.

“I showed up expecting there to be people,” Blaine said. “I figured that [Dolan] wouldn't just run this thing for the three of us, but yeah, it was just the three of us. It was really great. And it was even better because it was like we paid the regular price for a private tour.”

The Blaines aren’t the only ones who think New York is still worth visiting this year.

While the ferry station to Liberty Island is nowhere near the level of bustling it was pre-pandemic, tourists are still lining up to see the Statue of Liberty.

Jannyna and Katy Morillo came to New York City from Quito, Ecuador and stayed with Jannyna’s uncle in the Bronx. It was Katy’s first time seeing the city.

“I already know everything in the city, but for her [this is a first],” Jannyna said in Spanish. “We went to the Empire State Building, Madame Tussauds, and now the Statue of Liberty. This weekend we are having a family reunion for my uncle’s birthday.” 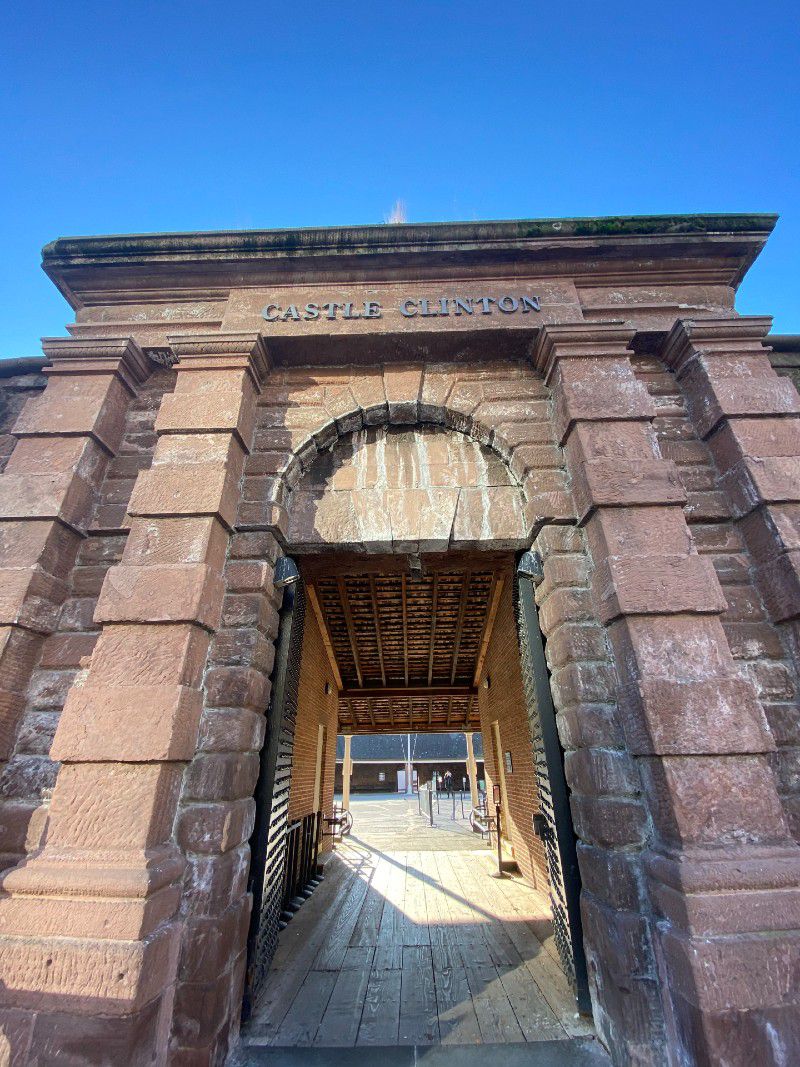 The Castle Clinton National Monument in Battery Park, across from the ferry station, was nearly empty but still open to the handful of tourists visiting the institution.

There were other groups of friends who traveled to the city as well, including a group from Texas.

“I would definitely come back,” said Gabby, 25. “I want to see more of the parks—it's really beautiful.”

That was the refrain from many tourists we spoke to who have recently visited New York City—that it was such a great experience it only affirmed their resolve to come back.

And that’s what is keeping Dolan’s spirits up and helping him concoct new ways to provide meaningful products and experiences for people who want to appreciate the city.