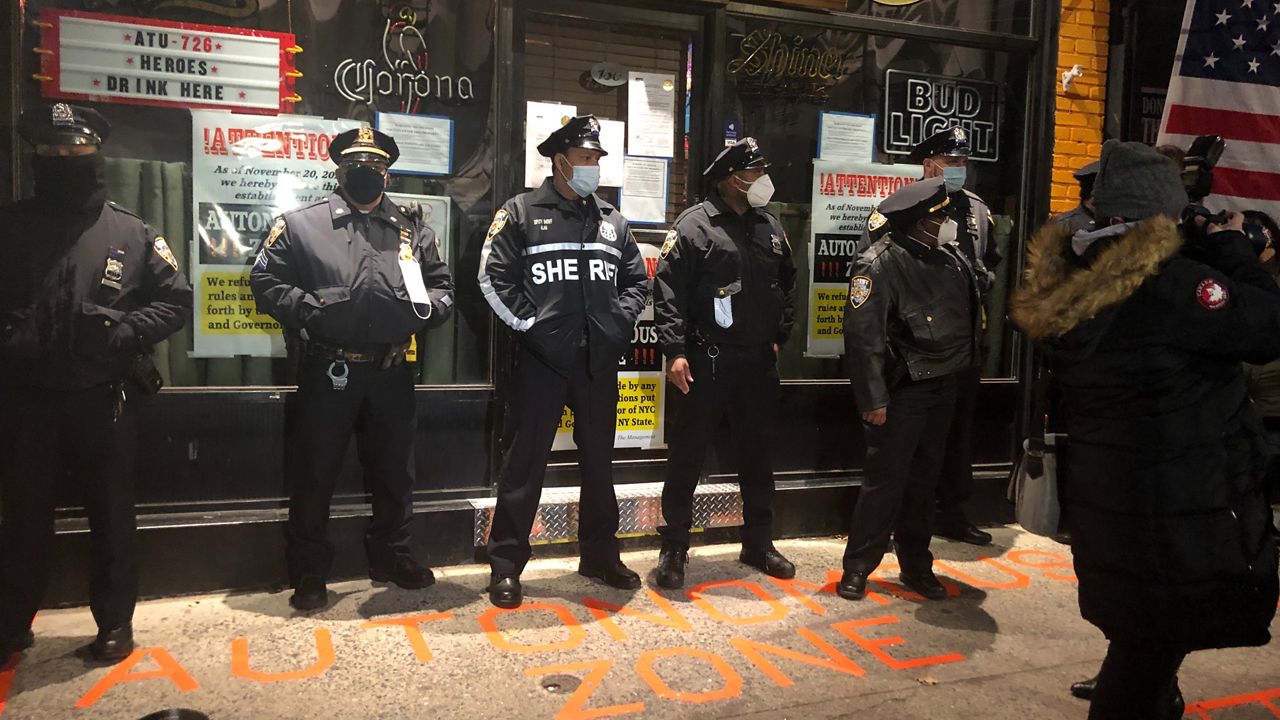 STATEN ISLAND, N.Y. - The owner of Mac's Public House on Staten Island blasted the city Wednesday for shutting down his bar and arresting his general manager.

The general manager of #MacsPublicHouse says they are completely closed today to business and the @NYCSHERIFF has 8 officers guarding the door after @senatorlanza tried to enter earlier today. Ill be here on #StatenIsland 2nite with @NY1 coverage of this developing story pic.twitter.com/1dLB1J351z

Dozens of protesters showed up outside early Wednesday evening to express their support for the bar.

More than 100 protestors have shows up @ #MacsPublicHouse on #StatenIsland - it’s closed entirely now after the general manager & others were arrested Tues. 4 violating the state’s #COVIDー19 regulations for restaurants in orange zone. The @NYCSHERIFF has 8 officers here @NY1 pic.twitter.com/NuT9nFRmVw

NY1 crews spotted sheriff vans pulling up to the scene around 6 p.m., as well as members of the NYPD.

The protest appeared to thin out at around 7 p.m., but a smaller group stayed on scene as the night went on.

Despite being in an “orange zone,” which forbids indoor dining, McAlarney and Presti not only allowed people to dine inside, but promoted it, putting up signs declaring the restaurant an "autonomous zone."

To try to get around the restrictions, Mac's offered free food and drinks with a suggested donation.

McAlarney said he had no choice but to defy state rules.

"I'm just trying to support my family. We've asked you guys to work with us; you've refused to work with us," he said, referring to the state. "You forced our backs into the situation we're in right now. It's time for people to stand up and open up."

The state stripped the bar of its liquor license on November 27, and the city health department ordered the bar to close.

A spokesperson for the governor said a state liquor authority attempted to conduct an inspection on November 25 but was refused entry, something the spokesperson called "a serious violation of state Alcoholic Beverage Control law in and of itself." The spokesperson also said the inspector spotted at least four patrons inside the bar, in violation of the orange zone rules.

An Section 16 order was issued over the weekend requiring the bar to comply with the executive orders, the spokesperson said.

"This owner is learning that actions have consequences -- breaking the law and putting your neighbors' lives at risk during a global pandemic to make a political statement is simply unacceptable, and we thank the NYC Sheriff for enforcing the law to keep New Yorkers safe," the spokesperson wrote in a statement.

The State Liquor Authority said offering alcohol for free is not a “loophole" and that a liquor license is needed to sell or serve alcohol.

On Tuesday, the city Buildings Department ordered the business to vacate.

Despite that order, investigators say plainclothes deputies saw 14 people inside eating and drinking inside Tuesday night.

The arrest sparked a peaceful protest Tuesday of about 50 people outside the bar.

"You don't selective enforce. You have all of these big box businesses that are wide open, making billions of dollars and these people, if they don't survive, they're going to go to ugly extremes, and that's what's going to happen, it's going to be worse than the virus itself," said Scott Lobaido, a protester.

One of the employees given a ticket, attorney Louis Gelormino, said he had been inside earlier to suggest the owner comply with the regulations despite what they believe is an unfair rule.

"He's in the orange zone. And obviously him like a lot of the business owners throughout Staten Island feel like, that their businesses and livelihoods are being taken away from them. They complied with everything the first time, they complied with all the measurements the governor and the mayor ordered and that all of a sudden they're shut down," said Gelormino. "Here's the ironic part, you can turn around and go two blocks away and it's not shut down. It's only half of Staten Island that's shut down."

Just a block away from Mac’s, Corner House BBQ owner Anthony Valois said it’s frustrating that his business has to scale back despite following all the safety precautions. He said he supports McAlarney’s protest, but not necessarily how he’s going about it.

“It’s a catch 22, it’s between a rock and a hard place, so we agree with it conceptually but I think it’s very important to follow the rules and protocol,” he said.

Reporting from Alyssa Paolicelli is included in this story.

Editor's Note: An earlier version referred to Presti as a co-owner. A lawyer for the bar said he's the general manager.