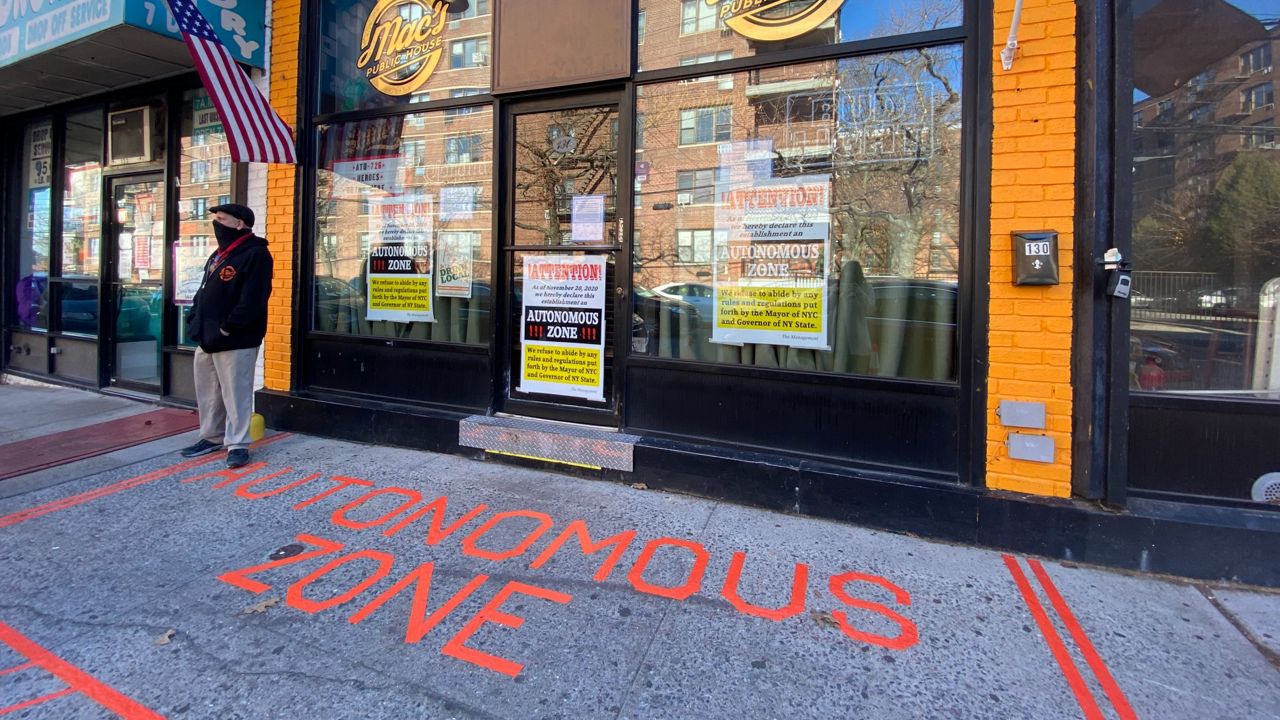 Staten Island bar owner Keith McAlarney has declared what he calls an "autonomous zone" outside his bar, Mac's Public House.

He says they will not be complying with any public health restrictions issued by Gov. Andrew Cuomo or Mayor Bill de Blasio.

And despite being hit with hefty fines, stripped of their liquor license and the state health department issuing a cease and desist order, the pub remains open.

"We have no faith in our government at this point to unnecessarily lock us down based on numbers they are putting out and putting it on the burden of small businesses," McAlarney said.

Signs saying "autonomous zone" now cover the outside of the Grant City bar.

Mac's Public House is in Staten Island's "orange zone," which prohibits indoor dining. But on Sunday, there were patrons inside drinking and eating.

Their work around without a liquor license? Serving for free, with a suggested donation.

"You can literally walk from one establishment to another and end up having different rules and guidelines," McAlarney said. "The rules and guidelines make no sense. I don't think it has anything to do with public safety. But we are Americans and we have a choice."

He says the support for his autonomous zone has been overwhelming. During our visit, a woman dropped off a donation check and others drove by thanking him for taking a stand. A GoFundMe page has been started to raise money for the bar.

Cyntia Silveira took a cab from Brooklyn with her son to show support.

"He's not just doing this for himself," said Silveira. "He is doing it for other people as well."

McAlarney was overcome with emotion.

"It has just been tremendous," he said. "I never wanted to be this type of person that had to be in this position. I just wanted to be a bar owner and take care of my family. Thats all I want."

In a statement a spokesperson with the State Liquor Authority said: “In order to protect New Yorkers’ health and safety during this public health emergency, the SLA suspended Mac’s Public House’s liquor license and the Department of Health issued a Section 16 Order after investigators found the premises flagrantly violating COVID-related regulations in the Staten Island Orange Zone. These rules are designed to protect New Yorkers during a dangerous increase in COVID cases, and ignoring them just a week after we had to open a surge hospital on Staten island not only demonstrates an utter disregard for New Yorkers’ health, but is clearly illegal. The State is working with the NYPD and NYC Sheriff’s office to monitor compliance.”

The agency also said offering alcohol for free is not a “loophole," adding a liquor license is needed to sell or serve alcohol.