NEW YORK - As coronavirus cases continue to rise around the state amid fears of a second wave, Gov. Andrew Cuomo announced on Wednesday that all bars and restaurants with a liquor license will need to be closed between 10 p.m. and 5 a.m. each night.

Curbside food orders, food pick-up, and deliveries will still be allowed after 10 p.m. Gyms and fitness boutiques will also have to close at that hour.

NYS is taking action to stop the spread in response to rising COVID numbers.

Any establishment with a state liquor license, including bars and restaurants, must close at 10pm.

Gyms must also close at 10pm.

Cuomo also says any gatherings inside a home are to be limited to no more than 10 people. These new rules will go into effect on Friday.

In a statement, the New York State Restaurant Association called the new closure time a blow for the struggling industry.

“Our members have put in place procedures and protocols to mitigate the spread, and we’ll continue to do so to ensure the safety of our employees and patrons. We understand the logic behind micro-cluster restrictions, but at this time we have concerns about blanket statewide restrictions like this,” a spokesperson for the association said.

The governor also sounded the alarm about rising cases on Staten Island, most of which he designated a "yellow zone." 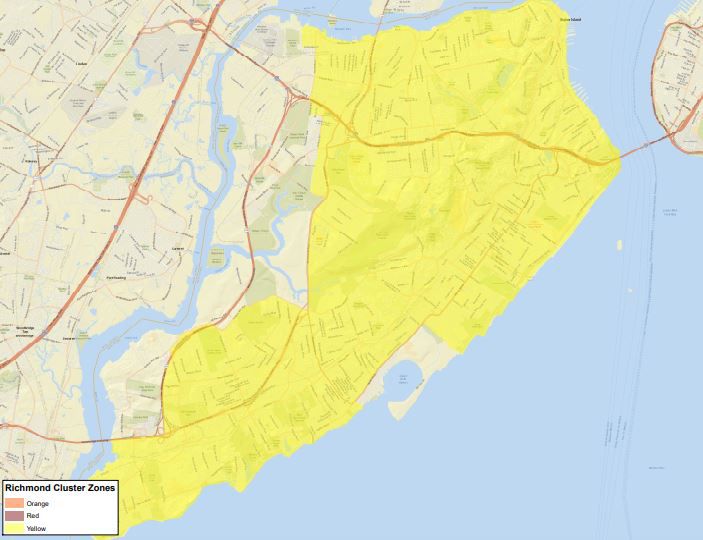 The "yellow zones" on Staten Island, as of November 11, 2020. Map courtesy of the governor's office.

In so-called "yellow zones," schools remain open, but with strict testing measures in place, and indoor and outdoor dining is limited to four people per table.

Cuomo attributed the increase to the borough’s proximity with New Jersey, which has a rising COVID-19 infection rate.

“If you look at the places in our state where we’re having issues, they’re very often near the neighboring states,” Cuomo said.

But the numbers are steadily on the rise in New York, although at higher rates upstate. Cuomo continued to point to New York's relatively low infection rate compared to most other states in the country, and noted the Empire State’s positivity rate remains the third-lowest in the nation; only Maine and Vermont boast lower rates.

Cuomo left the door open to further restrictions on gatherings and public spaces if the new measures did not work.

"Losing money hurts," Cuomo said. "But money can be replaced. Losing a loved one hurts forever."

Overall in the city, Mayor Bill de Blasio said there were 817 new cases Tuesday and 94 people hospitalized. The seven-day average infection rate is 2.52%, which is much higher than it's been for months. The city has gone over the 550 threshold of daily new COVID-19 infections for the last 11 days.

Statewide, the positive case rate in the last day stood at 2.9%, according to the governor. There are now 1,628 people hospitalized in New York due to COVID-19 and 21 people have been confirmed to have died of COVID-19 in the last 24 hours in New York.

Cuomo announced Tuesday that the state’s daily positivity rate had reached 3% for the first time since May 26.

You can see positivity levels by zip code by visiting nyc.gov/health/coronavirus

The current numbers are stark increases from the summer, when the state and city’s daily, seven-day, and 14-day positivity rates were at 1% or lower, and hospitalizations and deaths were far less frequent.

De Blasio warned that if the numbers pass 5%, the city could see “serious restrictions,” but even 3% on the seven-day rolling average would lead to all schools having to go remote for “a period of time.”

De Blasio has particularly focused on the next two holiday months as a crucial time to curb this potential second wave. The mayor is urging people not to travel out of state for the holidays. People who do travel into New York City will need to quarantine for 14 days. He said the city will be “very strict about that."

However, according to state rules, if you test negative for the coronavirus three days before your trip, you will be able to avoid the 14-day quarantine rule.

The increases in cases in New York come as the United States deals with a third wave of the virus as colder temperatures bring more people indoors. The United States surpassed 10 million coronavirus cases on Monday, according to data from Johns Hopkins University. The U.S. hit a new record of daily COVID-19 cases, 128,412, on Saturday. Cases are climbing in practically every state, and deaths and hospitalizations are on the rise, too.​

Rob DeLuca is in a tough spot. While his business on Amboy Road, DeLuca’s Italian Restaurant, is doing ok, he will be be hit hard by the latest round of  COVID-19 restrictions — and that’s tough to swallow after what he’s been through the last several months.

“The businesses shouldn’t have to be regulated like this,” DeLuca said. “We’ve been following the rules since Day One. We’ve done everything to the best of our abilities.”

That’s not to say that Rob didn't see a crackdown coming. DeLuca’s is located in Tottenville, which at the beginning of this week.had the highest COVID-19 positivity rate in the five boroughs. What he and many others didn’t expect was that the state would designate nearly all of Staten island a “yellow zone” and reduce how many people can be seated at a table for indoor and outdoor dining.

“Yeah, they are kind of grouping us all together,” DeLuca said.

That frustration is compounded by the fact that DeLuca’s has a liquor license and will have to close an hour earlier to abide by the new restrictions.

Many restaurant owners are furious that the state is taking a step back considering New York still has the third-lowest positivity rate in the country.

“Public health and safety has to be of the utmost importance,” said Andrew Rigie, the executive director of the New York City Hospitality Alliance. “We have to recognize these restaurants are in a dire situation.”

People in the restaurant industry, and those that represent them in the city, want more information from the governor’s office before the latest round of rules is implemented.

“We need contract tracing and other data to justify limiting these hours, because it has such a significant financial impact on restaurants, on jobs,” Rigie said.

What everyone seems to agree on is that they don’t want to do anything that will put their customers at risk.

But when it comes to Staten Island, some question the reasoning behind some of the restrictions.

“If you’re saying you can’t have something after 10 p.m., why? Because COVID only affects people after 10 p.m.?” said Michael Reilly, a Republican Assemblyman for the South Shore of the borough. “We have to be a little more realistic in how we close things down.”