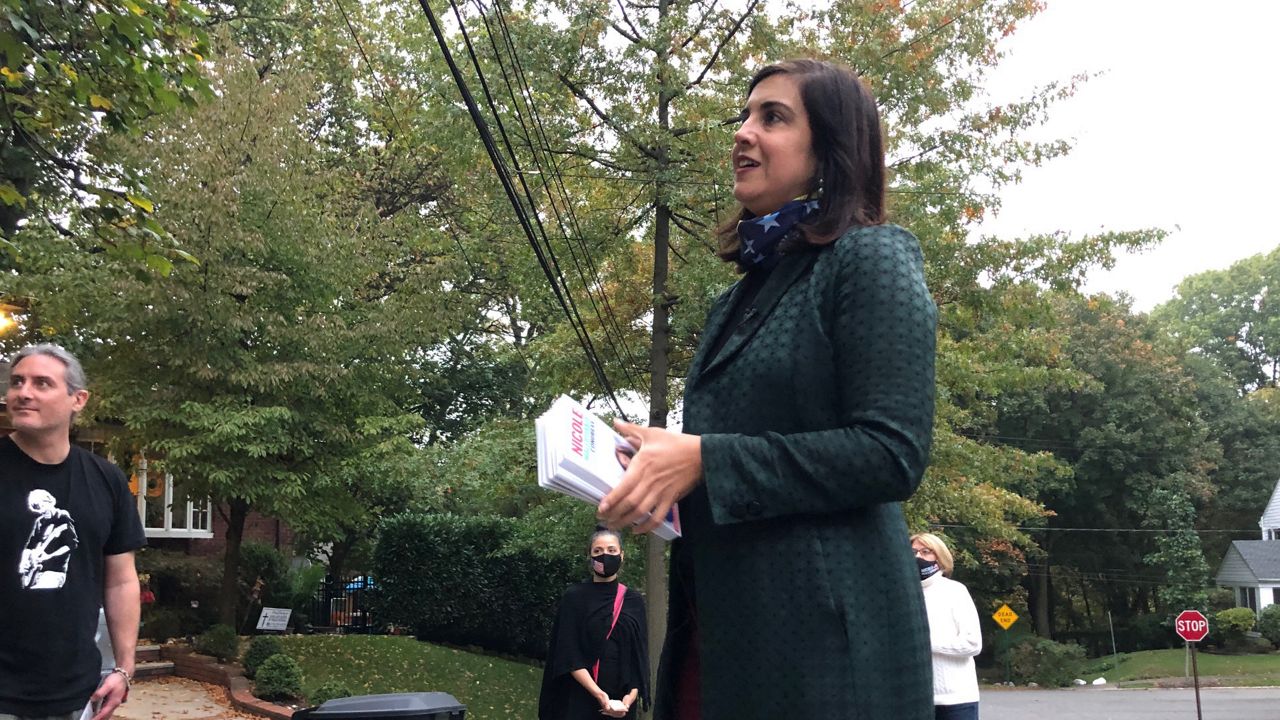 On the Campaign Trail, Malliotakis Defends Her Record and Relationship with Trump

Even with the blue face covering, Nicole Malliotakis was easy to pick out.

“Good to meet you,” she yelled up to one resident on their porch of their Staten Island home. "You going to go trick-or-treating?”

The Staten Island assemblywoman is clearly fighting hard to win this election.

So much so, she went into enemy territory.

“We’re putting a lot of effort into the North Shore in the swing parts of this district,” Malliotakis told us.

We knocked doors with her on a recent evening in a clearly blue area of the city’s only swing district. This is the latest bid for higher office for the Staten Island Republican — she faced off against Bill de Blasio for mayor in 2017.

But unlike that contest, this race is neck and neck. A new poll shows Malliotakis deadlocked with the incumbent, Congressman Max Rose.

That means both candidates are hitting the campaign trail, going door to door, trying to make a last pitch to voters. For the most part, in the midst of this pandemic, much of this campaign has played out on TV in vicious, often misleading, ads by both candidates.

The race has been one of the nastiest in recent memory. And voters of the district appear fatigued by the negative campaigning.

“Well, look, this is why I am doing this, so I have an opportunity to explain to people what’s going on,” Malliotakis told one voter in Randall Manor last week. "I mean, the claims, it's so dishonest. It's so hypocritical.”

She says Rose went negative first. Rose did release an attack ad going after Malliotakis the moment the primary ended in June.

“He’s the one that started with the nasty dishonest tactics, the name-calling, the immaturity,” Malliotakis said. "My ads have been focused on his record on where he stands on positions.”

Malliotakis claims she is the law and order candidate, luring voters with typical GOP talking points — higher crime and the radical left. Some supporters are just citing her record.

“I think she’s done a lot of good for our community and for our children and that’s important to me,” Staten Island resident Kerry Varvaro said after meeting Malliotakis in person last week.

But hanging over this race may be someone else. The district went for Donald Trump by ten percentage points in 2016. Malliotakis has embraced the president and won his endorsement.

But it's not a position winning over everyone.

“Never if I had a knife to my head,” said Staten Island resident Wendy Halm moments after meeting Malliotakis in the street last week. Clearly not a Malliotakis voter.

Moments earlier, Halm questioned the assemblywoman about her relationship with the president.

"Every sign is with you and Trump. You would probably do a lot better without Trump,” Halm told the candidate.

We turned the corner and asked Malliotakis about that criticism. Early in the 2016 campaign, Malliotakis had supported Florida Senator Marco Rubio for the Republican nomination. She supported Trump in the 2016 General Election.

“I voted for him in 2016. I am going to vote for him again. We are a ticket now. Am I going to agree with him all the time? Absolutely not. I am my own person,” Malliotakis said. She repeated it: "I am my own person."

The Malliotakis campaign team is targeting parts of the district where Donald Trump won in 2016, but Dan Donovan, the former congressman, lost in 2018. Which is what brought us to the North Shore.

On her second stop of the evening, the Irish pub O'Neill's, Malliotakis greeted a crowd that appeared to know her well. Three men told her they were ex-NYPD. They said she had their vote.

“Three NYPD guys. I love it,” she replied.

We’ll have to wait and see if they show up for her at the polls.