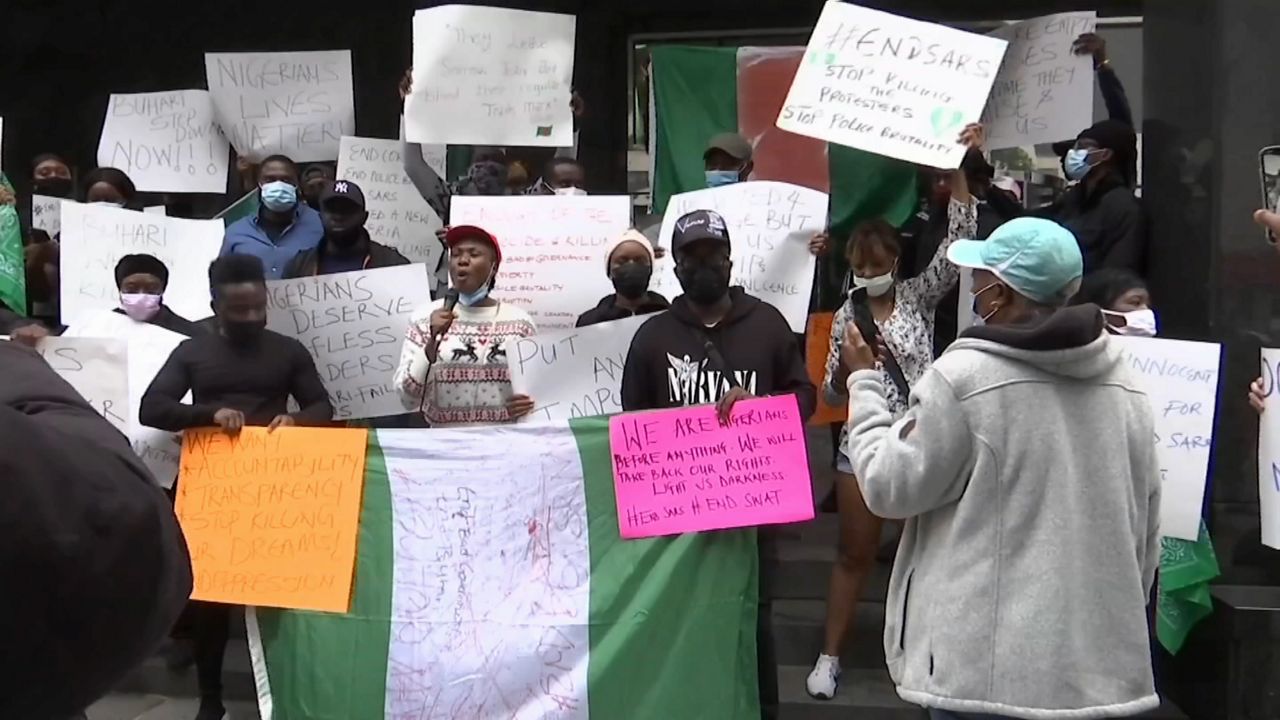 Crisis in Nigeria Becomes Personal for 30,000 Nigerians Living in City

These days, Bobby Digi starts each morning on Staten Island with a barrage of text messages from family and friends in Nigeria.

Videos sent by a friend in Nigeria's capital upset him, Digi told NY1.

"Seeing the images and knowing and having been to Lagos -- I was just in Lagos -- it was surreal, too unbelievable to see what had happened. It’s atrocious," said Digi.

Nigeria has been roiled by weeks of protests that began over police violence and misconduct and expanded to demand better governance.

At least 56 people have been killed.

Close to 400,000 Nigerians and their children live in the U.S, many in New York. Digi looks out for their interests as president of Nigerians in the Diaspora New York.

He was born in the U.S., but his parents now live in Nigeria and he's in constant communication with them and with people like Omolade Okunlola, who called Digi on Thursday to provide this update.

"Everyone is scared. Everyone is worried," she said. "The protesters are talking about re-strategizing or coming back to the street when the curfews are off. But we don’t trust the government and we know that we can also go out and be killed again as they’ve killed my brothers and sisters in Lagos just about two days ago. So yeah, I’m scared."

Digi gets such calls all day, and passes along the information to Nigerians here, including members of the sizable Nigerian community on Staten Island.

The unrest in Nigeria has triggered protests worldwide, including here in New York.

Digi has been working to raise money for protesters, and to boost their morale.

"Continue to tell people on the ground that there’s a tremendous amount of support for what they’re doing," Digi told Okunlola.

Digi said he sees parallels between the protests in Nigeria and both the Black Lives Matter demonstrations in the U.S., and the protests here after the death of Eric Garner -- the Black Staten Island man who died after being placed in a chokehold by police.

"They killed someone in broad daylight and actually took the person's car and went away. That was what the equivalent to what happened with Eric Garner in America. That was the pivotal moment in Nigeria," he explained.

There are several rallies planned here in the city in support of Nigeria in the coming days.

Residents here said they want to stand in solidarity with Nigerians and lend a hand wherever they can.