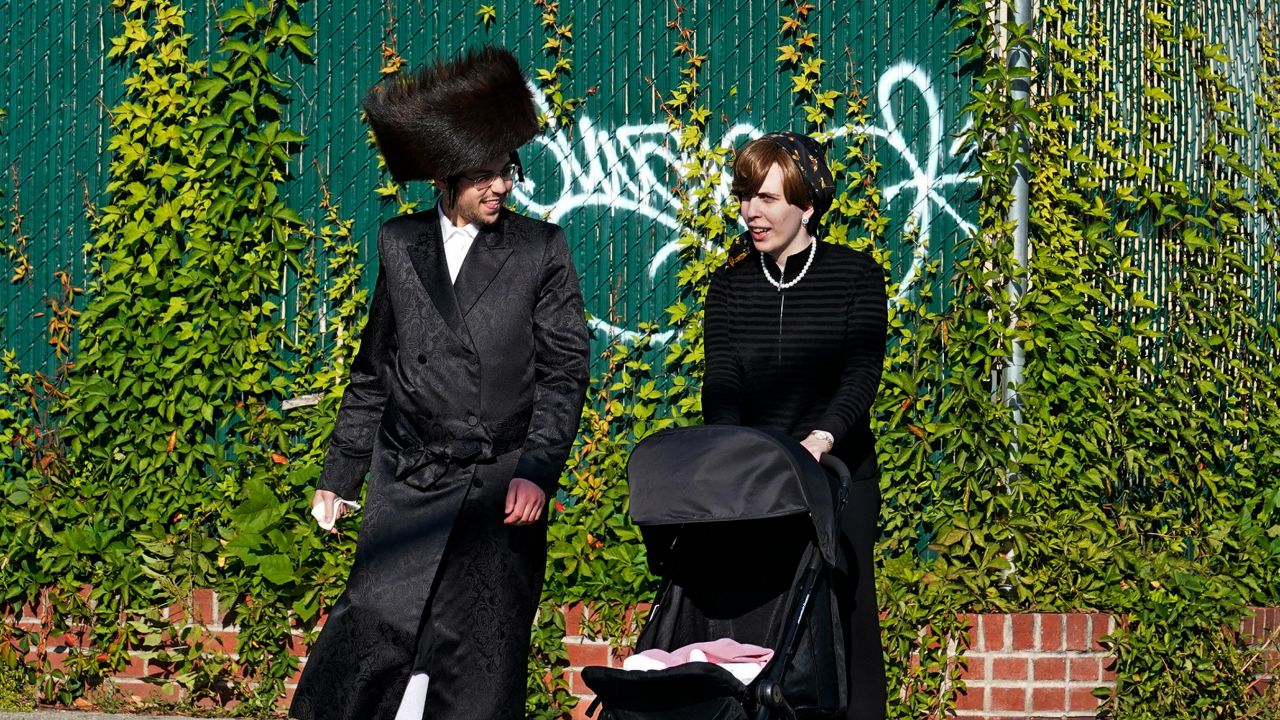 An Ultra-Orthodox man and woman cross a street, Sunday, Oct. 4, 2020, in the Borough Park neighborhood of New York. Over the past two weeks, the number of new cases of coronavirus has been rising in pockets of the city, including Borough Park, that are home to the city's large Orthodox Jewish population. (AP Photo/Kathy Willens)

BROOKLYN, N.Y. - "We have corona here. We have corona everywhere," Borough Park hardware store owner Emil Shamilov told NY1. "It's not just in this neighborhood."

Shamilov reopened N&G Hardware Monday after closing for the Jewish holiday of Sukkot. He's frustrated with Mayor Bill de Blasio for calling out his neighborhood as a COVID-19 hot spot.

City records show more than eight percent of coronavirus tests in the last two weeks came back positive in this zip code—one of the highest rates in the city—but Shamilov doesn't believe the numbers.

“[The] mayor should first take care of their own business, bring city back with what it was a year ago," Shamilov said. “Stop harassing people.“

Many of the city's COVID-19 hot spots are areas with large populations of Orthodox Jews.

The city has labored to convince some in the Orthodox community to wear masks and socially distance.

In Borough Park on Monday, we found many people not wearing masks, including customers entering stores wearing them partially or not at all.

“Can you please put on the mask over your nose?” a cashier asked a customer at the counter of one food establishment.

“What, do you want me to choke?” the woman answered.

“We're putting our lives at risks, as well you know," a counter worker told NY1 at another establishment. "I have kids to go home to, so I mean, I have no other choice. I need to work,” she said.

The woman who didn't want to use her name said her father died of COVID-19 in May, so she takes it personally when customers refuse to take precautions.

"When you do ask them, tell them to wear masks they either give you an attitude [or] they tell you they don’t have to," she said.

“Mask compliance four months ago in this area was zero, almost non-existent," explained Yiddish Borough Park blogger Yosef Rapaport. He said that in the last five days the percentage of people he sees wearing masks has shot up dramatically to perhaps 60 percent.

Rapaport said he welcomes Mayor de Blasio focusing on the issue, but blames him for poor communication and credibility.

“He is kind of giving a message of incompetence and then you have the president, who is popular in this community, belittling and laughing at people wearing masks.”  He said those mixed messages contribute to mistrust of government.

“You have to wear the mask. You have to keep social distancing,” Shamilov added.

Shamilov explained that he’s been very careful as an essential business operating during the pandemic, and that he’s confident the city will recover eventually, despite politicians.