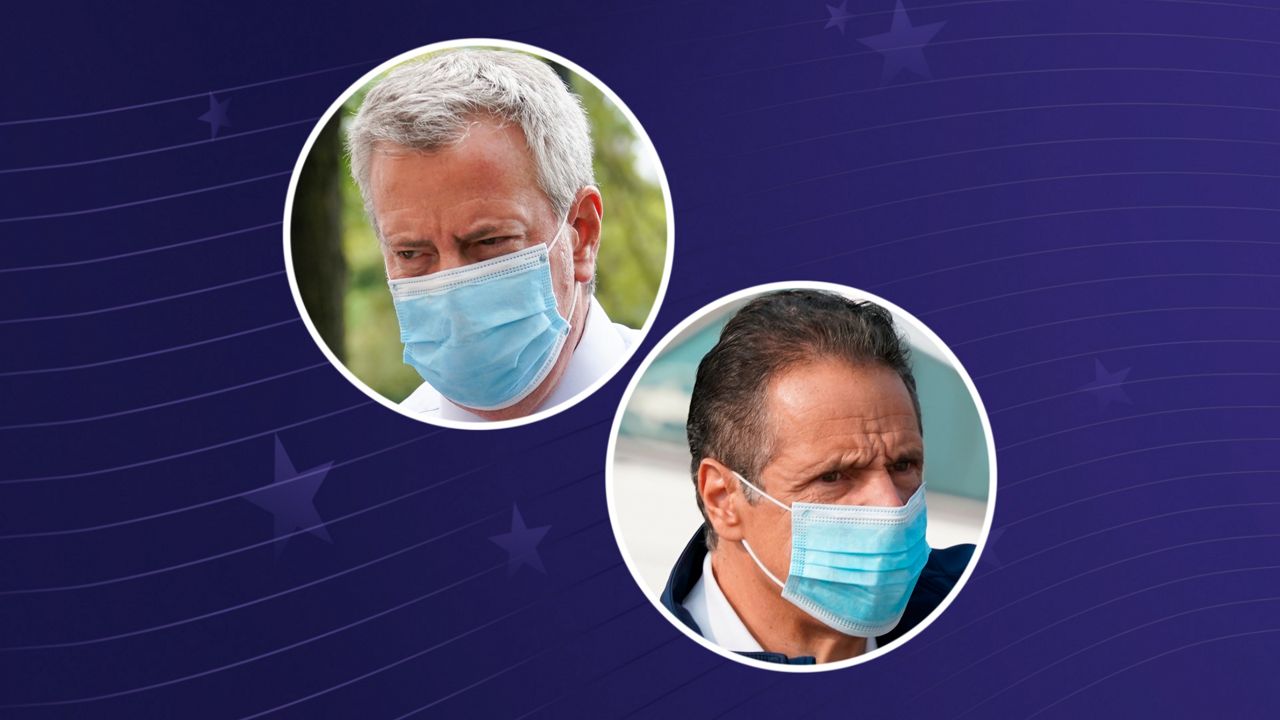 De Blasio, Cuomo at Odds Again on COVID-19 Response as City Tracks Increase in Cases in Queens and Brooklyn

Once again, the city is tracking a troubling increase in coronavirus cases. Once again, the two most powerful elected officials in charge of responding to it can’t agree about what to do.

The lack of coordination between Mayor Bill de Blasio and Governor Andrew Cuomo was on full display Monday, a day after de Blasio said the city would move to close public schools and nonessential businesses in nine areas of the city where COVID-19 cases are steadily increasing.

"If you live in any of the areas of concern, the nine key ZIP codes, or some of the other ones that are on our watch list, please limit your activity, stay home when you can stay home," de Blasio told reporters Monday during his daily briefing from City Hall.

For days now, the city has been tracking an increase in the positivity rate across nine ZIP codes in parts of Brooklyn and Queens. The neighborhoods include Bensonhurst, Mapleton, Flatlands, Midwood, Gravesend, Homecrest, Midwood, Borough Park, Gerritsen, Beach, Homecrest and Sheepshead Bay in Brooklyn.

In Queens, the city is keeping a close watch over the areas of Kew Gardens Hills, Pomonok, Kew Gardens, Edgemere and Far Rockaway.

"The governor's team are considering if they have alterations that they want to make to that geography or the approach, but until we hear otherwise, our plan is to move ahead Wednesday morning," de Blasio said.

Except the city can’t move ahead without approval of the state.

It was yet another episode in the long history of de Blasio and Cuomo: two powerful leaders who have seldom appeared side by side during a health crisis that is still unfolding and has punished New Yorkers of every stripe.

"I didn't put out this plan, he did," Cuomo said Monday when asked about the back and forth.

"If anything, you want to ask him why he didn't propose a plan to the state and work it out first and then just announce a final plan as opposed to announcing a proposed plan that the state then had to react to," he added.

Public Advocate Jumaane Williams issued a critical statement, stating that the lack of coordination is putting lives at risk.

"The back and forth between the Mayor and Governor on the scope and method of enforcement for additional restrictions in specific zip codes as COVID-19 cases rise is an echo of what we saw in mid-March, when delays and power plays led to lives lost," Williams said.

De Blasio, for his part, seemed confident the governor would eventually approve his proposal by Wednesday.

"If the state does not authorize restrictions, we are not going to act, but I find that very unlikely at this point. The governor has been clear that we have a problem," de Blasio said. "The time to act is now."