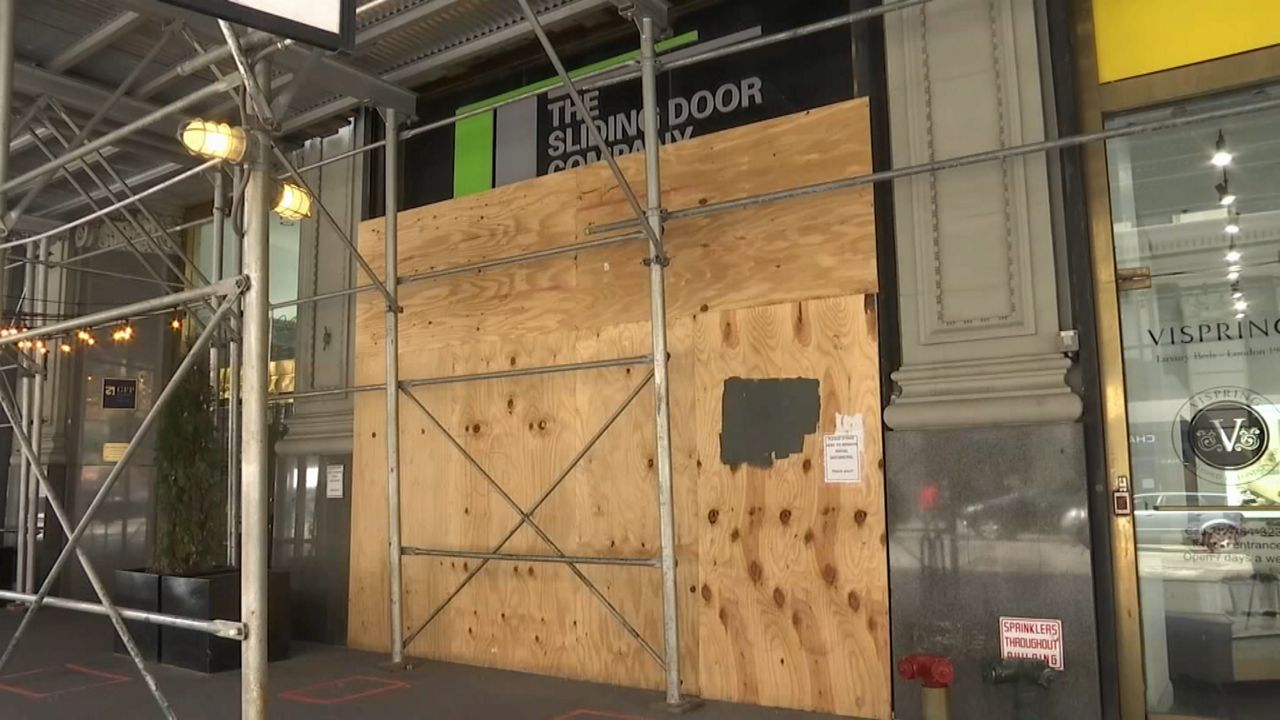 “We wanted to do something helpful, but we wanted to make money, too,” she told NY1.

They stopped making money when the pandemic hit, according to Pearsall-Barksdale, and were forced to close their doors for good.

“It kind of took us by surprise that suddenly this happened” she said.

It took everyone by surprise.

Take a look at how quickly foot traffic dropped in the city. An analysis of cell phone locations by the company SafeGraph shows a quick peak of people rushing to grocery stores after Governor Andrew Cuomo shut down the state in March, but then all retail and restaurant business plummeted.  By April, clothing store foot traffic fell by nearly 100 percent.

“That’s something that we saw in New York and across the country, that clothing saw the biggest decline,” said Nick Huntington-Klein, a Seattle University professor of Economics.

Huntington-Klein analyzes the data for SafeGraph and said foot traffic has recovered to about half of what it was before the pandemic, but some neighborhoods are still struggling. Foot traffic was still down more than 90 percent in Lower Manhattan around the World Trade Center and in areas of Midtown from August 2019 to August 2020, according to SafeGraph.

Without the streets packed with office workers and tourists rubbing elbows, it’s what you’d expect. But some neighborhoods in Queens are even worse off: from August 2019 to August 2020, SafeGraph says foot traffic went down 92 percent in Ditmars Steinway, Corona down 98.9 percent, and Elmhurst is stuck at negative 99.3 percent.

"The area in Queens in particular was the epicenter of the epicenter of this pandemic," said Queens Chamber of Commerce President and CEO Thomas Grech. "We read and saw awful stories about Elmhurst hospital being the focal point in many regards. That was the domino.”

Grech said the high infection and fatality rate during the worst of the coronavirus is still keeping people away from Elmhurst and Corona, but the Ditmars Steinway section has separate struggles, namely, the loss of some chain stores before the pandemic.

"Even before the COVID, retail in that area was going through a transition,” Grech explained. “Retail is under assault as we know nationwide. People’s skillset for buying things online only increased during the COVID, but before that it was a challenging environment."

She brought her stock home, making house calls for her clients and trying to build a website to keep some semblance of her business afloat.

“I’m just kind of walking through this one day at a time,” she said.