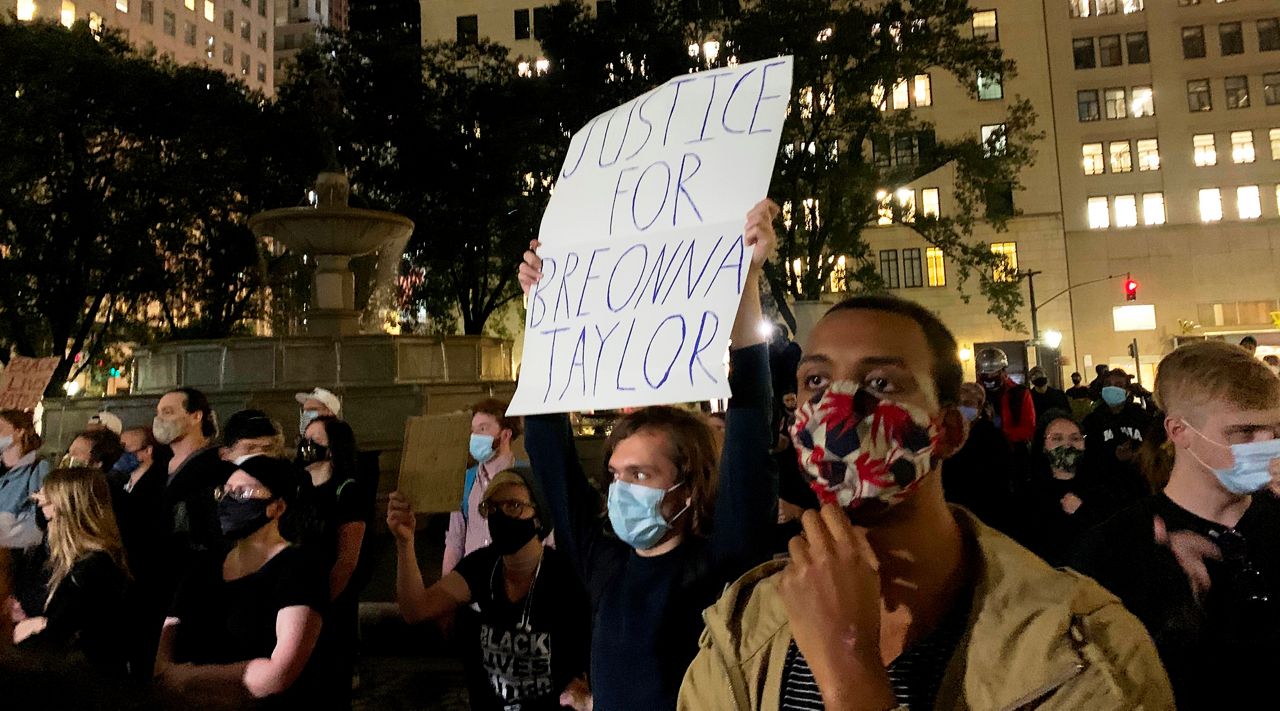 One of the signs protesters held up as they marched in New York City on September 23, 2020, after a Kentucky grand jury didn’t bring charges against Louisville police in the killing of Breonna Taylor. Shannan Ferry/NY1.

Protesters were out in New York City after a Kentucky grand jury on Wednesday brought no charges against Louisville police in the killing of Breonna Taylor.

“I’m very sad…at the lack of humanity showed to a woman with such potential in her young life,” one demonstrator in Manhattan said. “I’m here with my daughter in support of justice going forward.”

The only charges brought by the grand jury were three counts of wanton endangerment against fired Officer Brett Hankison for shooting into Taylor’s neighbors’ homes during the botched raid on the night of March 13. The FBI is still investigating potential violations of federal law in the case.

Prosecutors said two other officers who fired their weapons at the unarmed Black woman were justified in using force to protect themselves. Taylor’s boyfriend had shot first — striking one officer in the leg — after he said he mistook the police for intruders.

In New York City, hundreds of people gathered outside Barclays Center in downtown Brooklyn to express their fury with the decision. Protesters held a moment of silence and took a knee to honor Taylor.

That crowd later marched in the streets of downtown Brooklyn and onto the Manhattan Bridge.

Protesters said they wanted to show solidarity with Taylor and with the movement.

"Never to accept it, to continue to fight for what's right for us no matter what your skin color is, and that to always make a stance. Don't let anything or anyone walk all over you or make you insignificant. Show that you fight for justice as well," said one protester in Brooklyn.

"This is part of a collective effort to let out our frustrations, but do I think anything is going to come out of it in terms of justice for Breonna? No. That ship has sailed," said another.

They held signs with messages that included "Breonna Was Essential," referencing Taylor's job as an ER technician; "Her Life Mattered"; and "No Justice, No Peace."

“It’s really, really important. Breonna Taylor didn’t get the justice she deserves and it sends a message to every Black person that your life does not matter,” said Jason, a protester marching in SoHo. “I’ve been out here since George Floyd, just about every single day. So that’s why we’re out here. We need to get justice for every single Black person, and especially Breonna Taylor.”

Earlier in the day as protesters kneeled to honor Taylor, demonstrators asked Black women in the group to stand up for a moment of recognition.

As of 11:30 p.m., the demonstrators from Manhattan were making their way over the Williamsburg Bridge. It was unclear what their final destination would be, or for how long they planned to march.

Cars driving behind the protesters on the Williamsburg bridge @NY1 pic.twitter.com/n799MFx4ez

Barclays Center and Trump Tower, along with Union Square, have become regular sites for protests since the death of George Floyd on Memorial Day. Hundreds of people regularly turned out in both places, as well as in Union Square, in the the days and weeks that followed Floyd's death.

The protesters have continually called for reforms to police departments and for officers to be held accountable when they shoot and kill Black Americans.

Information from the Associated Press, Shannan Ferry, and Angi Gonzalez was used in this report.