“Occupy City Hall” protesters stage a sit-in in the park outside City Hall in lower Manhattan on June 26, 2020. Autumn Calica/NY1.

For the fourth night in a row, with their numbers growing, protesters on Friday occupied the park outside City Hall in lower Manhattan, demanding at least $1 billion be taken from the NYPD’s budget and given to community-based programs.

The protesters at City Hall Park are demanding a $1.3 billion cut to the $6 billion NYPD budget, with funds going to education, heath care, housing, and other social programs. They also say incremental cuts won't satisfy them.

The protest has in the span of just a few days grown from a few dozen people camping out on grass at Chambers and Centre Street to hundreds upon hundreds. The entire plaza was occupied from Chambers Street to City Hall.

Demonstrators say they plan to stay in the park until the budget is done. But, if their demands aren’t met, they could stay longer.​ The city’s budget deadline is Tuesday at 11:59 p.m. The budget — amid a fiscal crisis due to the coronavirus pandemic — is proving to be more dramatic than in previous years, creeping up on the deadline.

Mayor Bill de Blasio on Friday would not commit to meeting the budget cut demand.“We’re working with the City Council right now. We don’t have a final dollar figure. But we’re going to do something very, very substantial. We’ll know more in the next few days,” he said in his weekly interview on WNYC's The Brian Lehrer Show.

Some in the crowd Friday said they would not settle for less than their demands, and were disappointed in the mayor.

“We want to see real results. We want to be taken seriously, and I don’t think that’s happening,” one woman said. “How many people need to show up for you to care?”

City Council leaders, including Speaker Corey Johnson, have joined in the call and embraced the “Defund the Police”movement.

People in the park passed around supplies to their fellow protesters spending hours, if not days, at the location handing out food and water. They have also set up makeshift stations with supplies for people to stay in the area for extended periods of time. They have tables full of supplies to create sidewalk murals and signs, a first aid area with band-aids and hand sanitizer, and even a library. 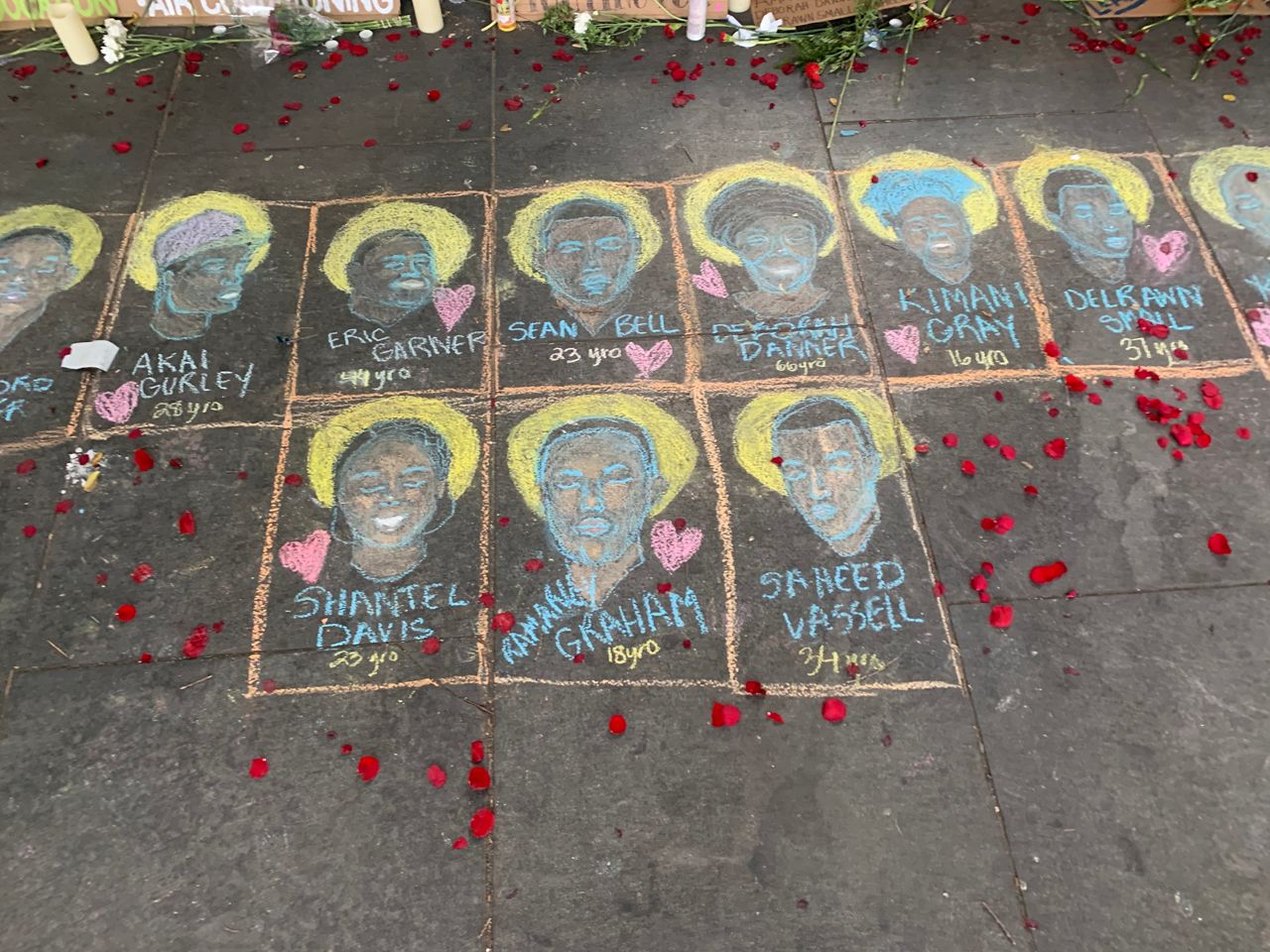 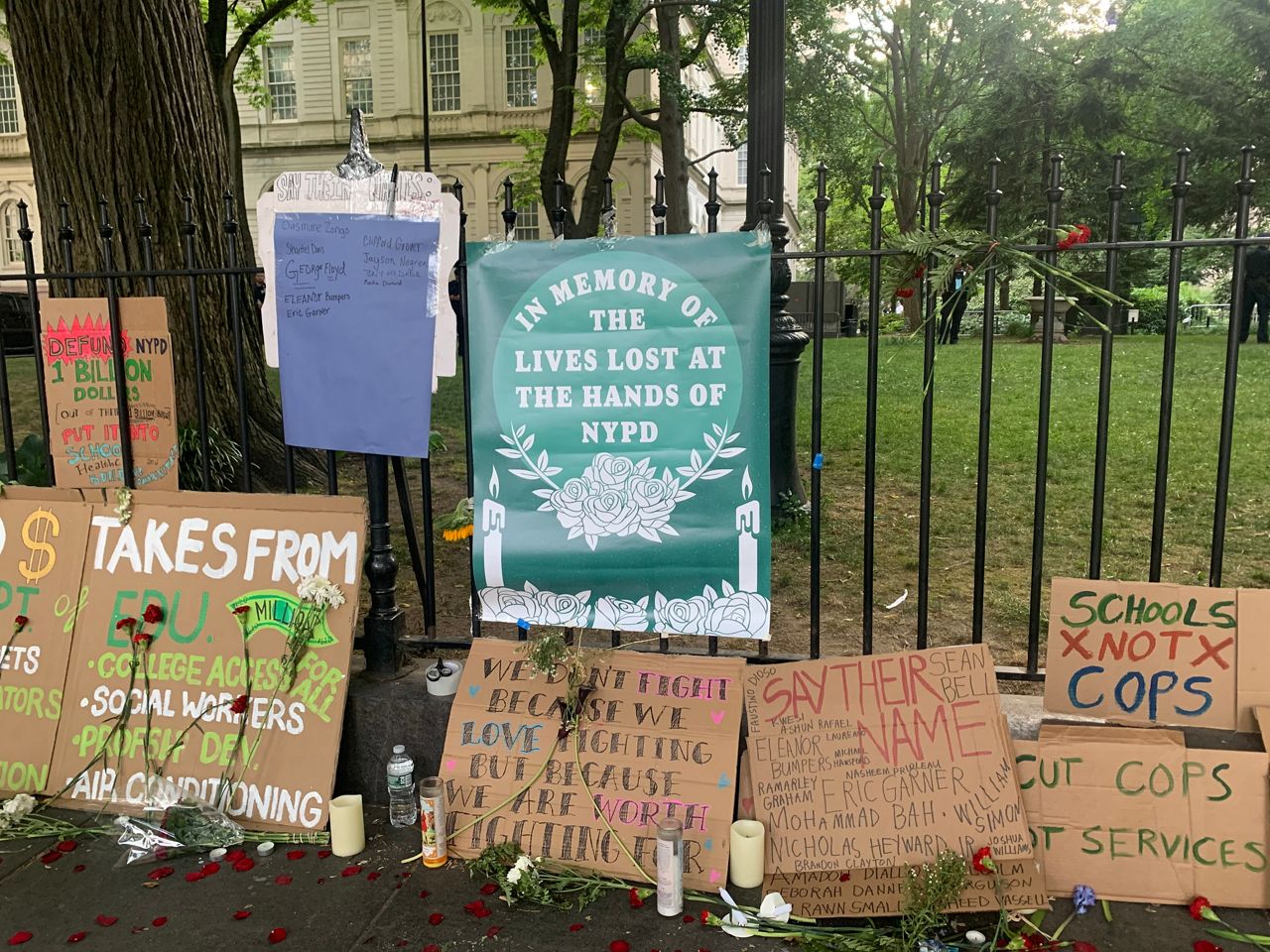 A library has been set up at #OccupyCityHall @NY1 pic.twitter.com/OM8TgsiCsC

While the atmosphere is peaceful and almost celebratory, Jawanza, an organizer, told NY1’s Shannan Ferry that they never lose sight of the reason they’re there: to pressure city government to defund the police department.

"We are very angry and very hurt... but what people need to remember is that when Black people express joy, that's an act of resistance."

Jawanza, one of the organizers of the "Occupy City Hall" protests, discussed methods and goals for defunding the #NYPD with @ShannanFerry pic.twitter.com/d0jedsrzdN

“We are definitely here about the defense of the Black lives, and we are very angry and very hurt,” Jawanza said. “Black people throughout the city are outraged about the violence we continue to see perpetrated by policing, and the NYPD in particular. But when Black people spread joy, that’s an act of resistance. The white supremacist powers do not want us to actually experience joy, to show up in the face of oppression and dance and sing and play musical chairs and jump rope. But that’s how we build it. That’s how we keep moving forward. That’s how we fix it.”

Some protesters leave by the end of the night, but others have been committed to camping out overnight. 1 a.m. to 7 a.m. are designated quiet hours, after speeches, music, and demonstrations during the day and evening.