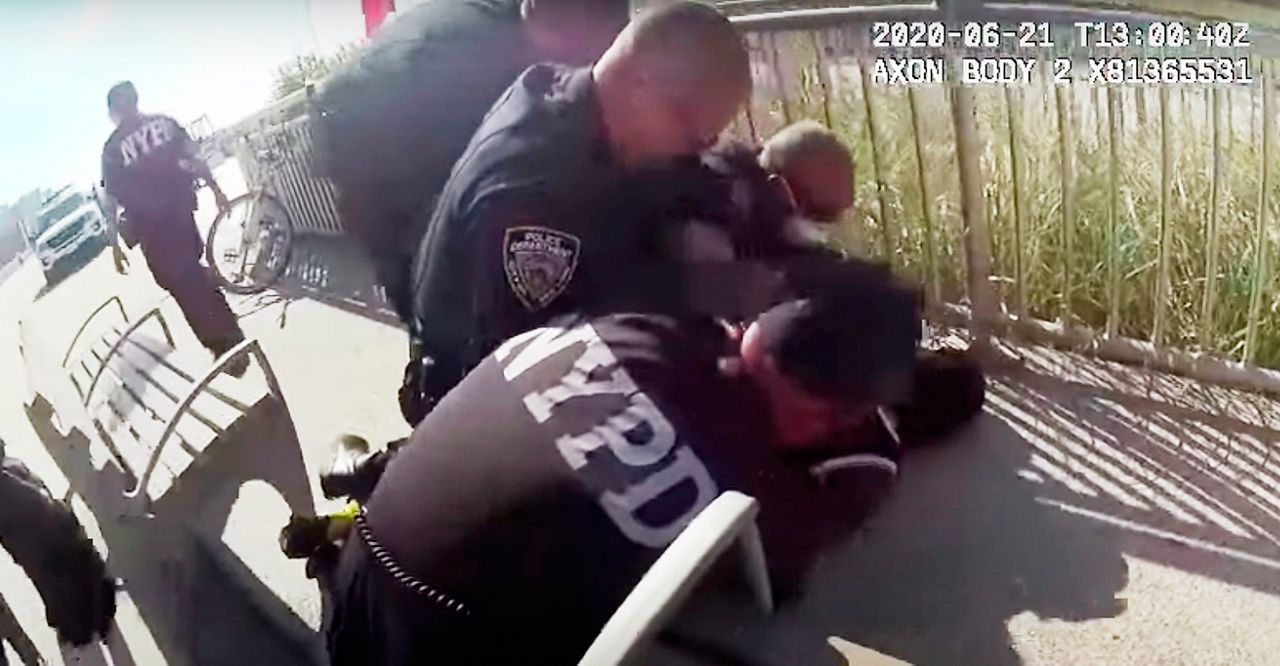 In this photo taken from police body cam video, New York Police officers arrest a man on a boardwalk Sunday, June 21, 2020, in New York. New York City Police Commissioner Dermot Shea says a police officer was quickly suspended without pay after putting his arm around the man's neck because we are living in "unprecedented times." Shea announced the suspension on Sunday just hours after the officer used what the commissioner called "an apparent chokehold" during a confrontation on a boardwalk in the Rockaway section of Queens. (NYPD via AP)

Officer David Afanador, a 15-year veteran of the NYPD, was arrested Thursday morning on felony strangulation charges for allegedly putting a man in a chokehold during an arrest Sunday — captured on both police body camera footage and a bystander's cell phone video.

“Today was the first step in the march for justice for this victim — the arrest and arraignment of this police officer," said Sanford Rubinstein, the attorney for that man, Ricky Bellevue. "But what’s really important is that he be convicted and sent to jail for what he did!”

Afanador, 39, turned himself in to the Queens district attorney's office, and was released without bail after a video arraignment in criminal court. State lawmakers and the City Council just made police chokeholds a crime earlier this month, after the killing of George Floyd in Minneapolis led to national protests.

“We feel very strongly that the governor's new statue, on which the ink is not yet dry, be enforced fully,” exclaimed Rubinstein.

The altercation that led to the charges happened on the boardwalk in Rockaway Park, after a man identified as Ricky Bellevue allegedly taunted several officers, grabbed something out of a trash can, and asked, "Are you scared?"

As officers tried to arrest Bellevue, Afanador appeared to put his arm around Bellevue's neck for several seconds.

“Ricky is still suffering from the abuse, the brutality, the chokehold that this officer did to him," said Rev. Kevin McCall.

According to Bellevue’s lawyer, the chokehold was an example of excessive force that left him injured, with a gash on the back of his head that “took all of his hair off and all of his skin off."

The Queens DA says Bellevue will not be prosecuted in the incident.

Bellevue's attorney criticized the DA for not holding the officer in jail.

Afandor's attorney said: “It’s a sad commentary that prosecutors now feel the need to summarily arrest police officers instead of thoroughly investigating these incidents. It seems like everyone is entitled to due process except police officers in this alternate universe we are living in.”

Afandor could face up to seven years behind bars if convicted. He’s due back in court in August.