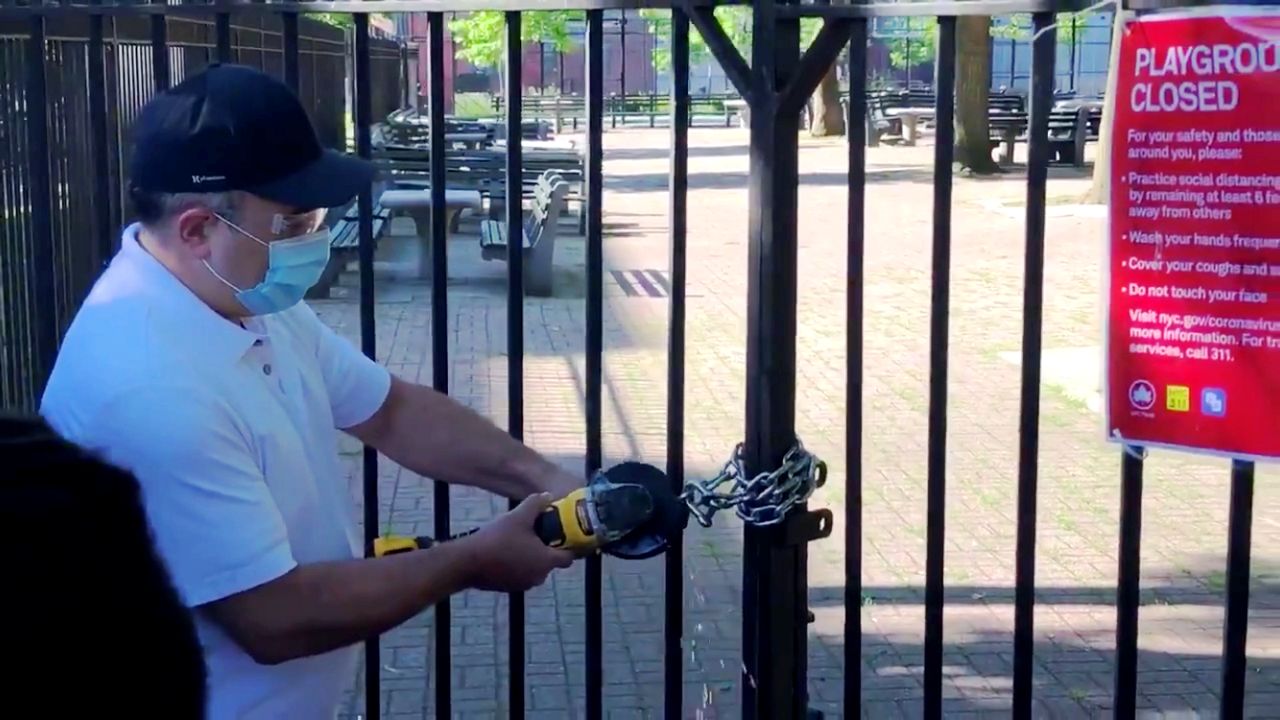 Local leaders in Midwood use a grinder to open the chain and lock in Kolbert Playground, defying the city’s rule that playgrounds must remain closed due to coronavirus. They say kids need somewhere to play as we head in to summer. @NY1 pic.twitter.com/w3I6geJKEk

It had been closed, like all city playgrounds, since April because of safety concerns due to the coronavirus, but after it was forcibly reopened, children were soon swinging, sliding, and playing there.

"We're asking for you to give our children a safe place to play, let kids be kids, the kids have been locked up at home right now for three months and not been in school,” said Assemblyman Simcha Eichenstein.

City Councilman Kalman Yeger, State Sen. Simcha Felder, and Eichenstein had vowed to forcibly open playgrounds in Midwood and Borough Park after the city rejected their demands to formally open them.

They said it made no sense for the city to allow anti-racism demonstrations but not allow children to enter playgrounds. They also said their communities have no parks where children could play.

﻿“It cannot be the case that parks are open in some neighborhoods and parks are locked in our neighborhoods,” Yeger said. “If it was truly, truly the case that for public safety and for public health parks had to be closed, then let all the parks be closed. And if it’s not the case, then let all the parks be opened, but enough is enough. The hypocrisy has to end.” The group also broke the locks at Dome Playground in Borough Park on Tuesday.

Monday, video showed members of Williamsburg's Orthodox Jewish community, many without masks, rushing into Middleton Playground after it was busted open with bolt cutters. The parks department tells NY1 the park has been broken into at least 25 other times before, and was recently welded shut.

Playgrounds are still technically not allowed to open, and that means despite children playing, there are no cleaning protocols in place. That’s not a concern to all parents.

"Of course I would like everybody to keep the distance and keep themselves safe,” one mother said. “But what we have to do with our kids at home? Three months sitting at home, it's very hard."

Assemblyman Joseph Lentol said families want activities for their kids to do and said, in part, "The City must come up with a better plan than cutting off access to playgrounds entirely."

Some people, though, are concerned, and by the way the group went about opening up the playgrounds.

"There are better ways of doing it,” said a Midwood resident. “I understand the position, yet at the same time it is vandalism.”

Mayor Bill de Blasio says playgrounds are going to stay closed until Phase Two of the city’s reopening, which could be as soon as June 22.

"I understand people's frustrations, but if folks act prematurely and that causes the disease to start spreading again, and that's the sort of thing that will undermine our ability to get to Phase Two and stay in Phase Two,” the mayor said.

But for at least several hours Tuesday, the city took no action to close these suddenly liberated playgrounds.