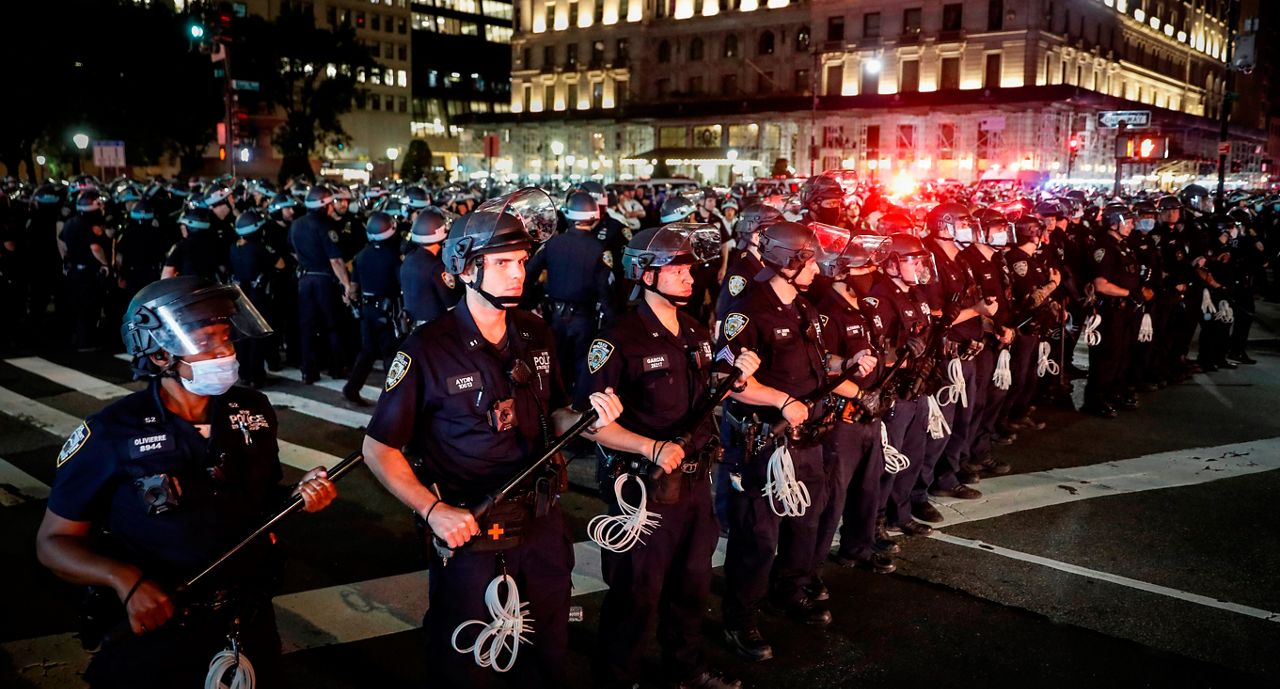 NEW YORK - Police again cracked down on protesters outside after New York City’s 8 p.m. curfew Thursday, arresting protesters out for the eigth straight day denouncing the death of George Floyd.

The NYPD says more than 200 people were taken into custody.

They include a DoorDash delivery worker whose arrest was caught on video.

Delivery people are among the essential workers who are exempt from having to follow the curfew.

The police department says the delivery guy was released after they checked his credentials.

Protesters on the Upper East Side were arrested for curfew violations a few minutes after 8 p.m. hit. NY1 crews spotted police arresting protesters and leading them into vans.

About 1,000 people had staged a sit-in outside Gracie Mansion on the Upper East Side, then marched south before police stopped them at 66th Street and Madison Avenue. At least a dozen people were seen being taken into custody.

More arrests in Midtown were spotted after 10 p.m.

There were also reports of arrests outside the Plaza Hotel on Fifth Avenue.

In the Mott Haven section of the Bronx, at least 10 protesters were reportedly taken into custody after police surrounded the group, charged them, and handcuffed them.

Meantime, Police Commissioner Dermot Shea is defending his department's actions amid growing criticism of the NYPD.

Shea apologized for enforcement that led to claims of racial bias or excessive use of force while trying to enforce the curfew and breaking up crowds.

He also outlined a number of attacks against the police which he says are not helping the protesters' cause.

Shea says protesters are throwing bricks and carrying weapons, and he's afraid someone could get seriously wounded or killed.

The commissioner went on to say officers, elected officials and community members must come together to heal and make a change in policing.

In other parts of the city, signs pointed to protesters going home. Union Square, usually a gathering place for protests in the city, was empty by 8:30, except for a fairly large police presence.

Barclays Center in Brooklyn, which has been a stopping area for many of the borough’s protests, quickly emptied out by about 8:15 p.m.

But demonstrators were spotted later in the evening being penned in by police at the intersection of Washington Avenue and Atlantic Avenue.

Scene at Washington Avenue and Atlantic

Police are telling protesters they're in violation of Mayor de Blasio's curfew.

a stream of protesters came out with hands up.

No reports of violence or arrests from protesters

An officer on Thursday night threatened to arrest NY1’s own Dan Rivoli and his crew while they tried to get footage of demonstrators pinned by police at the location.

Officer threatened to arrest me and my crew for trying to get footage of demonstrators pinned by police on Washington Ave. Bw Atlantic and Fulton

We were pushed back to Atlantic https://t.co/xgtrflkDrD

Mayor Bill de Blasio, who has frequently defended the NYPD’s actions during the protests, criticized the department for arresting a delivery worker and journalists, despite essential workers being exempt from the curfew.

Just got off the phone with @NYPDShea after seeing the troubling video of a delivery worker arrested by police while doing his job. This is NOT acceptable and must stop. Food delivery is essential work and is EXEMPTED from the curfew.

But some argue the mayor is to blame for arrests that stem from the curfew. Many elected officials and activists have harpooned the curfew, saying it hampers New Yorkers’ ability to protest police brutality and leads to confrontations between protesters and police officers trying to enforce the order.

End the curfew. Support all of our police reform bills. End violence against peaceful protestors. End the re-interpretation of 50-A. Work with us to restore SYEP and to reduce the NYPD’s budget & invest that money into housing, health care, young people & communities of color.

Earlier Thursday, more than 10,000 people marched from Cadman Plaza Park across the Brooklyn Bridge to Foley Square. The peaceful demonstration followed an emotional memorial service for George Floyd, killed last week after a Minneapolis police officer placed his knee on Floyd’s neck for several minutes while he pleaded “I can’t breathe.”

At the same time, another memorial service for Floyd took place in Minneapolis, where the Rev. Al Sharpton delivered the eulogy. He compared the death of Floyd to the history of black Americans.

Thursday’s march follows a relatively peaceful night Wednesday, with 180 arrests citywide, mostly for curfew violations. There was, however, a violent attack against three NYPD officers. Officer Yayonfront Jean Pierre was stabbed in the neck and officers Randy Ramnarine and Dexter Chiu were shot in the hands in Brooklyn. All three were expected to recover. The suspect was shot and hospitalized in critical condition. Sources said the attack was not related to the protests.