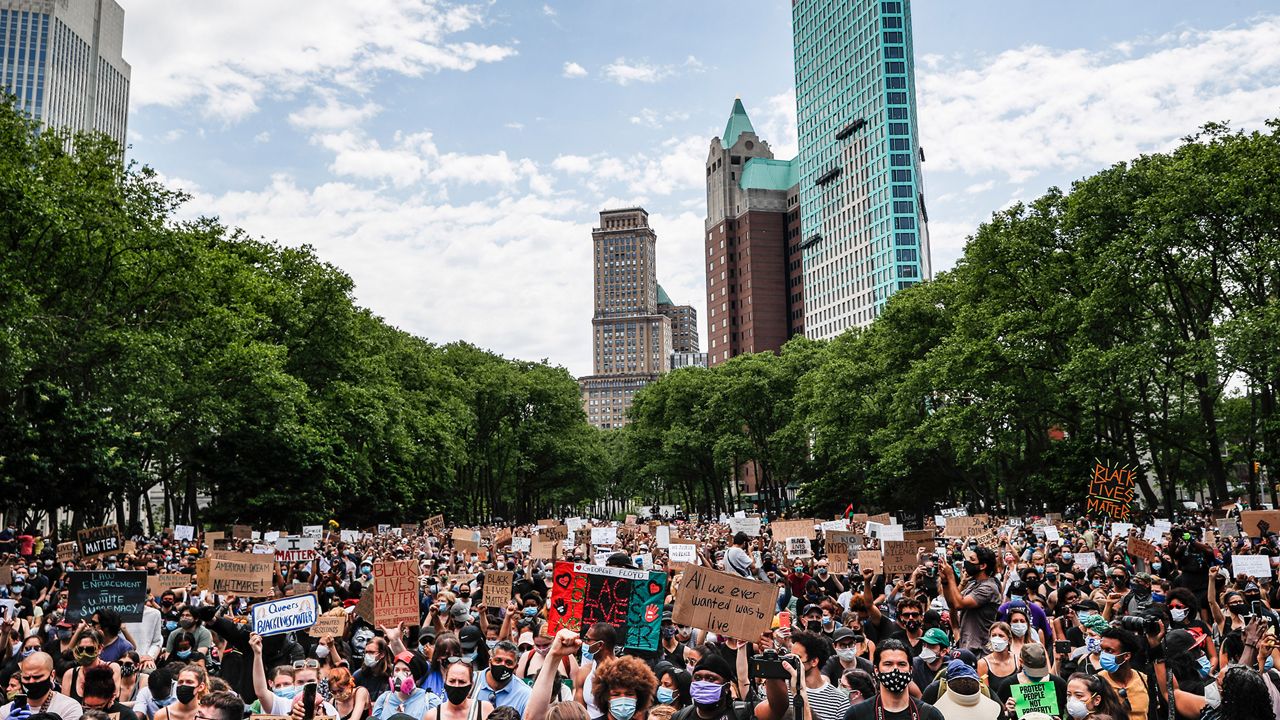 New Yorkers gather for a memorial service for George Floyd at Cadman Plaza Park in the Brooklyn borough of New York, on Thursday, June 4, 2020. (John Minchillo/AP)

More than 10,000 people gathered in Cadman Plaza Park on Thursday for a memorial service for George Floyd, the man killed by Minneapolis police.

Mayor Bill de Blasio was booed by the crowd when he spoke at the service, despite the request of organizers for participants not to boo him.

Mayor Bill de Blasio’s speech at the memorial for George Floyd in Brooklyn was met with boos and jeers, despite requests from organizers for the crowd not to do so. pic.twitter.com/3Yr96RiaMj

De Blasio, who has faced harsh criticism for his reponse to protests around the city, said Floyd cannot be allowed to have died in vain.

Floyd’s brother, Terrence, and other members of the Floyd family were at the service, which began with a moment of silence in memory of George Floyd, then a celebration of song.

Floyd’s brother Terrence was overcome with emotion as the crowd offered its support.

“My brother is gone, but the Floyd name lives on,” he said.  “I’m just thankful about the movement that’s going on.”

“No family should have to endure what this family has endured, she said.  “No one here wants us to go back to the way things were.”

Public Advocate Jumaane Williams, a vocal opponent of the mayor’s curfew, talked about how his mother taught him to get through encounters with police officers.

He also took the opportunity to criticize de Blasio and Governor Andrew Cuomo’s handling of the pandemic.

“So many of us haven’t had time to heal and they keep coming and coming," he said.  "Who came out of their house because of a pandemic led by an inept mayor and and inept governor who caused tens of thousands to die, most of them black and brown."

Civil rights activist, the Reverend Kevin McCall called on the crowd to “say his name, George Floyd” and asked them to respect the legacy and family of George Floyd.

“No one is higher than the family of George Floyd,” he said.  “Without his family there would be no George Floyd.  He represents peace. He was a gentle giant.”

“The cries for justice and change are now being heard all across this nation, and that change is coming stirred by the forces marching protesting peacefully, fueled by the passion of all your convictions for justice,” she said.

She talked about “the futility of violence in the struggle for racial equality.”

“I pray that George’s daughter joins with the other daughters whose fathers have been killed, that my little sisters become the daughters of the movements for justice and human right for all people,” James said.

Protestors there told NY1’s Jeanine Ramirez they felt they needed to attend the memorial to help stop the violence, one calling the killing of Floyd a “modern day lynching”.

At the same time, a funeral service for Floyd was held in Minneapolis at North Central University.  The school’s president, Dr. Scott Hagen, announced a new scholarship that will be offered in Floyd’s name.

Floyd family attorney Benjamin Crump talked about the difficulty ahead in getting justice for Floyd and stressed that “it was not the coronavirus that killed George Floyd.” An autopsy released Wednesday said Floyd contracted the coronavirus in April.

Another of George Floyd’s brothers, Philonise, told stories about their childhood and his love for his brother.

“We had so many memories,” he said.  “Everywhere he goes, you’d see people and how they’d cling to him. He was like a general. Everybody loved George.”

“There has not been the corrective behavior that says if you commit a crime, it doesn’t matter whether you wear blue jeans or a blue uniform,” he said. “You must pay for the crimes you commit.”

"I want him to open that bible.  We cannot use bibles as a prop.  And for those that have agendas that are not about justice, this family will not let you use George as a prop," Sharpton said.

Sharpton talked about Floyd’s death as a metaphor for black American life.

He talked about the marches and said “none of us in this family condones looting or violence.  But one thing I want us to be cognizant of:  there’s a difference between those calling for peace and those calling for quiet.  Some of you don’t want peace, you just want quiet.  You just want us to shut up and suffer in silence. The overwhelming number of people who marched weren’t breaking windows. They were breaking barriers.”

He talked about the changing times, saying when he saw people in Germany and London marching for justice for George Floyd, he knew “it’s a different time.  It’s a different season.”

“This is the time and we won’t stop.  We will keep going until we change the whole system of justice,” he said.

Sharpton ended with words about the importance of faith.

At the end of the service, attendees stood for eight minutes and 46 seconds, the amount of time Minnesota police officer Derek Chauvin held his knee on the neck of George Floyd.

A host of elected officials and celebrities attended the service, including the Reverend Jesse Jackson, Minnesota Congresswoman Ilhan Omar, members of the Congressional Black Caucus, Sen. Amy Klobuchar, and numerous actors, rappers and activists, including Tyrese Gibson, Kevin Hart, Tiffany Haddish, T.I., Ludacris and many others.

Floyd will be buried on June 9, following a private family funeral. Former Vice President and presidential candidate Joe Biden is expected to attend.