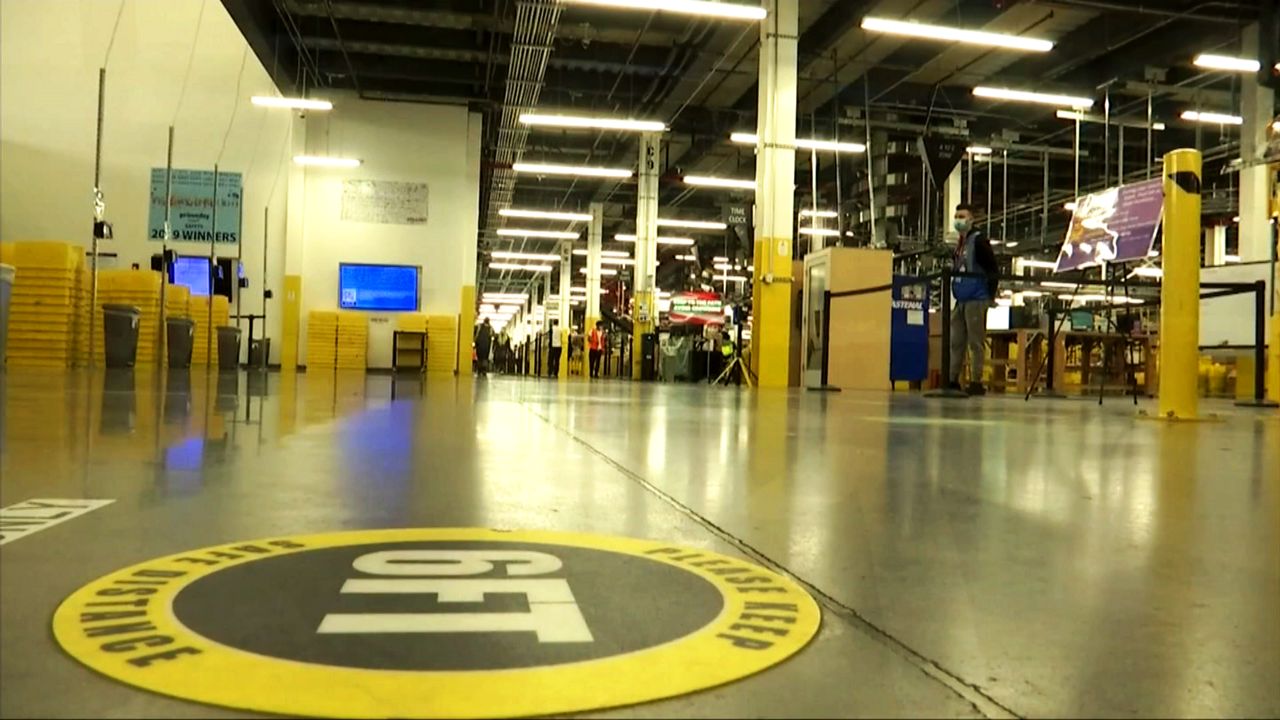 STATEN ISLAND, N.Y. - Workers say there have been at least 30 cases of coronavirus among employees at the Amazon fulfillment center known as JFK 8 since the pandemic began back in March.

On Thursday, associates at the warehouse seem to have adjusted to their new normal: working in masks, wearing gloves and distancing six feet apart.

"Before, yes, I was a little nervous like is normal because we have family and I saw like everybody’s leaving and I was nervous too but but now I am safe," said Arlinda Gjunksa, a worker at the facility.

There have been at least two protests at the Bloomfield site since March, with workers claiming that the company wasn't doing enough to keep them safe and demanding that the facility shut down for deep cleaning. One worker says he was fired for organizing a walk-out, a claim Amazon disputes.

Amazon wouldn't say exactly how many cases of the virus have been reported at JFK 8, citing company policy, but said the workers who had it were not found to be connected to each other.

"There were concerns around should we close our fulfillment center. What we have done is actually far beyond what a one time shut down will do," said Traci Weishalla, Assistant General Manager at JFK 8. "Instead of that we’ve just added on the measures we already have in place, like enhance the cleaning. We have on site daily deep cleaning and this is been going on for almost 2 months."

Tents have been set up outside the sprawling facility, designed to give workers plenty of space to spread out as they wait to enter the building. Supplies like masks, wipes and gloves are handed out all day and six-feet markers and directional traffic arrows have been placed on the floor.

Infrared thermometers scan everyone who enters the building for fever - a process that takes just seconds.

"Everybody overall had the same concerns. We’re all just trying to be safe. But I could tell you like Amazon literally has done everything they possibly can," said Matt Smith, who works training new employees. One of the hardest areas to ensure social distancing is in the break room where employees gather literally all day long. More than half of the tables have been removed and those remaining are placed six feet apart. The rest have been scattered at 10 locations throughout the site.

Break times have changed to prevent too many workers from being in the break room at the same time.

The new break sites, like work spaces, are monitored by members of social distance teams, whose sole responsibility it is to remind people to stay away from each other.