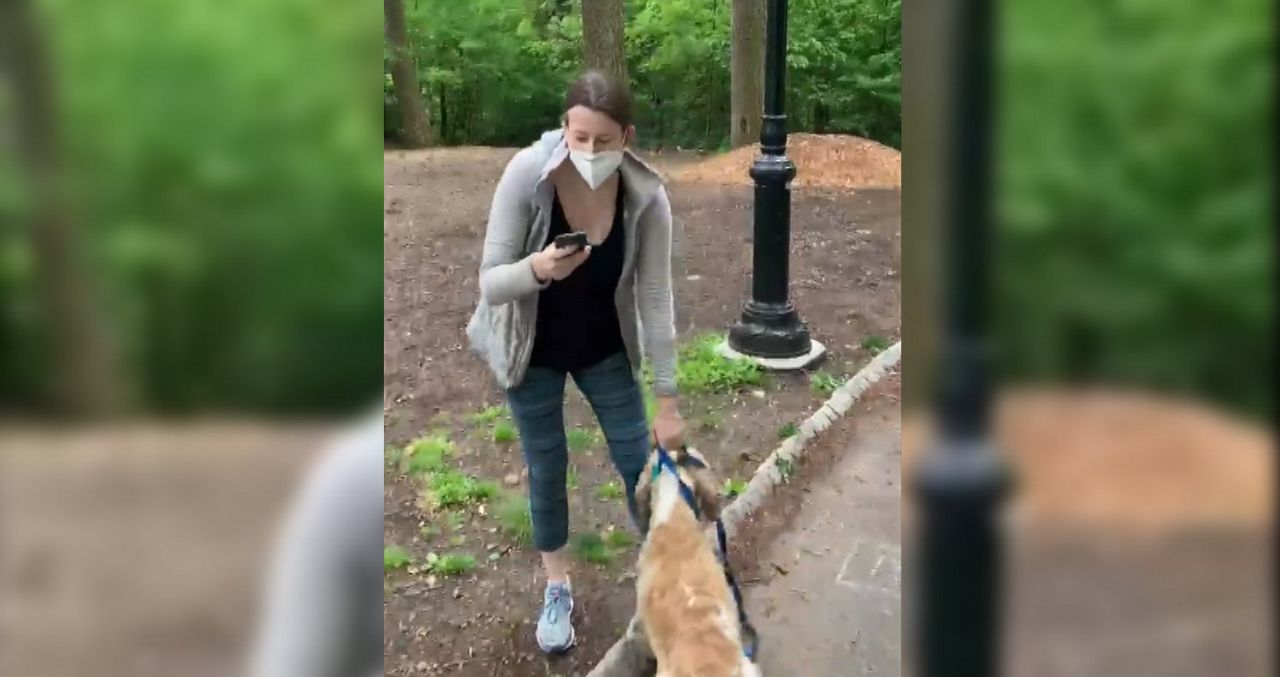 NEW YORK - The white woman who called police on a black man who asked her to leash her dog in Central Park was fired from her job Tuesday after their dispute, captured on video, went viral.

“I am going to tell them there is an African American man threatening my life,” the woman, identified as Amy Cooper, is caught on camera saying to Christian Cooper, who is of no relation to Amy Cooper.

It all started when Christian Cooper, a Harvard graduate and avid birder, asked Amy Cooper Monday morning to follow the rules in that part of Central Park and put a leash on her dog.

When she refused, Christian Cooper took out his phone and started filming the incident.

Christian Cooper’s sister, Melody Cooper, posted the video to Twitter, referring to Amy Cooper as a Karen, which has become slang for entitled white women.

Oh, when Karens take a walk with their dogs off leash in the famous Bramble in NY’s Central Park, where it is clearly posted on signs that dogs MUST be leashed at all times, and someone like my brother (an avid birder) politely asks her to put her dog on the leash. pic.twitter.com/3YnzuATsDm

The video set off a firestorm, racking up more than 30 million views.

"You know I am always terrified for my brother as a black man in the world that something could happen to him,” said Melody Cooper in an interview. “And this is an example of how close we came.”

Many saw the dispute as part of a pattern of black people being falsely reported to the police. Mayor de Blasio reacted to the video on Twitter, saying its showed “racism, pure and simple.”

“She called the police BECAUSE he was a Black man,” de Blasio added. “Even though she was the one breaking the rules. She decided he was the criminal and we know why.”

In response to an incident involving an employee on May 25th, Franklin Templeton issued the following statement. pic.twitter.com/8f2lMwK0r5

The investment company Franklin Templeton said it had fired Ms. Cooper, hours after it had placed her on leave.

Following our internal review of the incident in Central Park yesterday, we have made the decision to terminate the employee involved, effective immediately. We do not tolerate racism of any kind at Franklin Templeton.

“We do not tolerate racism of any kind,” the company said on Twitter.

Ms. Cooper also surrendered her dog to an animal rescue group after being accused of animal cruelty by some viewing the video.

“It is sad it has resulted in these consequences,” said Melody Cooper. “But I think it is important for people to see that this is a serious issue."

Police say when they arrived on the scene Amy Cooper was still there. She told officers she felt threatened and that Mr. Cooper had left. Police did not file a report.

"All the 911 operator hears is a screaming woman that basically you would think is getting attacked physically,” said Police Commissioner Dermot Shea during an interview with “Mornings on 1” Tuesday.  “In hindsight when we look at that video, we don't know what happened before but that was not what was portrayed."

Amy Cooper told CNN she wanted to “publicly apologize to everyone.”

She said her actions were inexcusable.