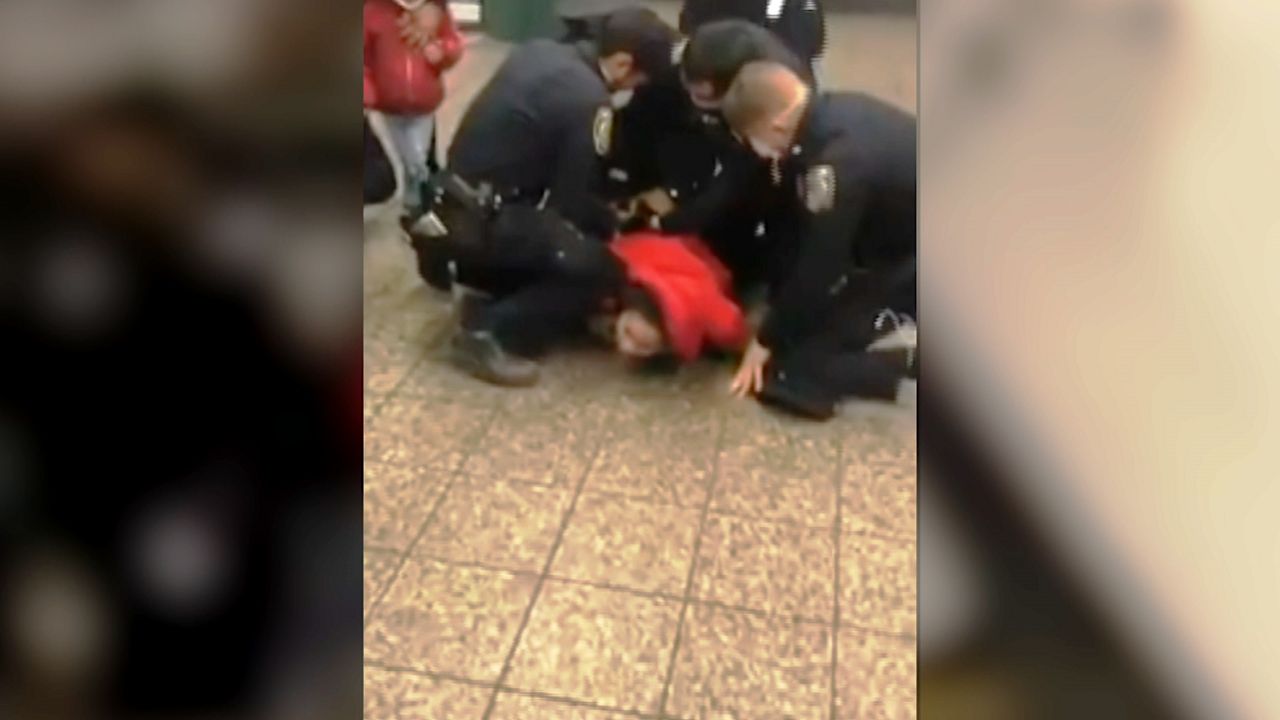 NEW YORK - A mother was arrested and charged Wednesday with resisting arrest, disorderly conduct and harassment after a viral video captured NYPD and MTA officers placing her in handcuffs in an altercation over coronavirus regulations inside a Brooklyn subway station.

From the video, it appears she may have been speaking on a cell phone Wednesday morning at the Barclays Center station and didn't have her mask all the way on when officers approached her about not wearing the mask.

Police initially said the woman hit an officer and was escorted out of the station.

Sources say she explained she was having a bad day.

Police say she was given a desk appearance ticket and released.

In the audio recording from the video, one can hear people shouting about the police action, saying, "She got a mask on, her baby got a mask on."

From the video, it appears she may have been speaking on a cell phone Wednesday morning at the Barclay's subway station and didn't have her mask all the on when officers approached her about not weaning the mask.

About an hour before that incident, Police Commissioner Dermot Shea heatedly rejected accusations that NYPD officers are arresting blacks and Latinos for violating social distancing rules, but looking the other way when white New Yorkers break the rules.

This comes after several clashes between officers and African-American New Yorkers were caught on video.

The commissioner spoke during the mayor’s briefing on coronavirus.

The NYPD says it made 125 arrests from March 16 to May 10 for COVID-19 related issues. Sixty-six percent of those arrested were of black people, 24 percent Hispanic. The NYPD says other illegal actions compounded many situations. Chief of Department Terence Monahan said the incidents were also captured on police body cameras.

“When you look through the body cam, you see exactly why we approached. Bottles of Hennessy on the car, joint in the hand. Another one of the guys smoking a marijuana cigarette and goes right to the cop and says, ‘Hey, this is legal. I can do this,’ Monahan said.

The chief also said there have been domestic disputes about COVID-19, and altercations in stores where officers were called for and arrests were made.

Some elected officials and activists argue the disproportionate number of arrests of people of color shows racial profiling.

“In the last week we have had death threats to police officers in New York City and their families,” Shea said.

There have been at least six threats according to the NYPD.

“Let’s remember, we are a minority majority police department, fact. We make fewer arrests than we ever have, fact,” Shea said.

With weekend temperatures expected in the 60s and 70s, Chief Monahan urged all New Yorkers to follow social distancing rules.

"Listen it’s hot, it’s going to be a beautiful weekend. Don’t go out in crowds, don’t gather. This disease isn’t over, you know people are dying."