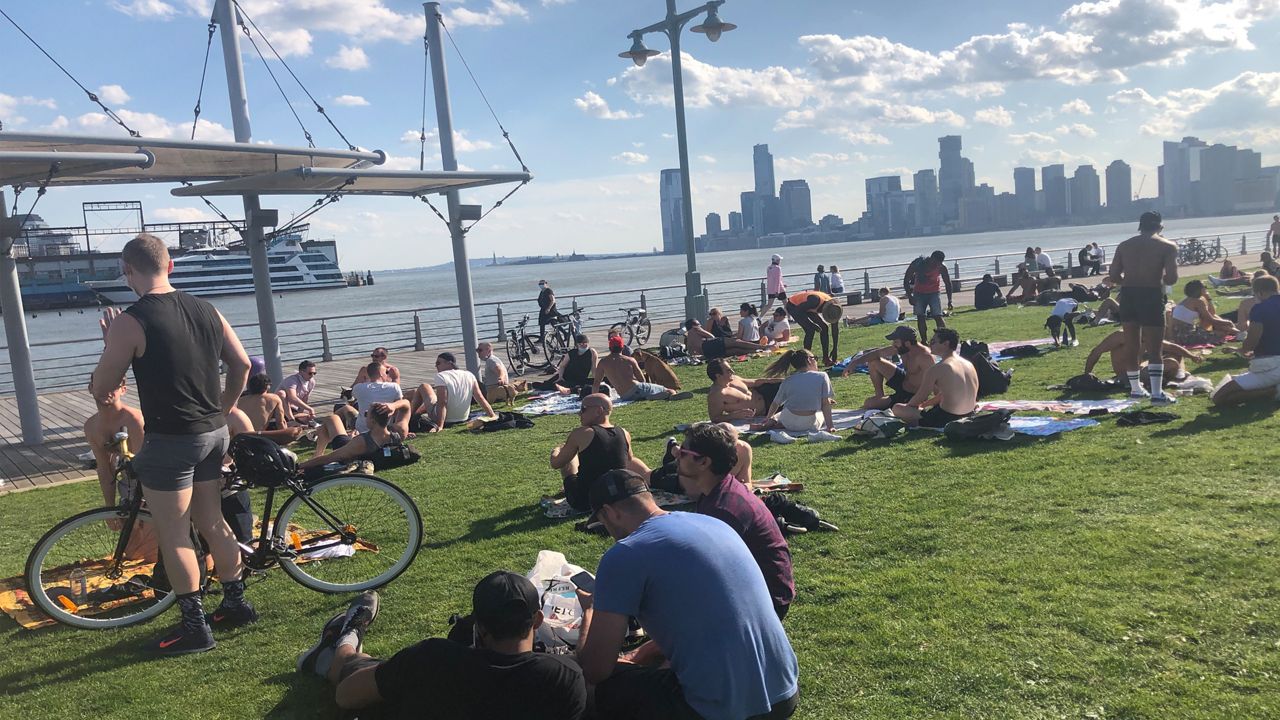 A vast majority of the summonses the NYPD has issued so far for social distancing violations have gone to black and Hispanic people.

According to the NYPD, of the 374 summonses handed out from March 16 to May 5 for social distancing violations, 193 were given to black people and 111 were issued to Hispanics. Added together, that totals more than 81 percent of all summonses issued.

“When the raw summons data is examined, Black and Hispanic men and women are represented the most,” the NYPD said.

New numbers from the Brooklyn district attorney’s office also reveal racial disparities in the enforcement of social distancing in that borough.

Of the 40 people arrested in Brooklyn between March 17 and May 4, 35 were black, 4 were Hispanic, and 1 was white, according to the Brooklyn DA's numbers.

The numbers in Queens tell a similar story. There, 20 people were arrested due to failure to comply with the city’s social distancing mandate, according to a statement by Queens District Attorney Melinda Katz on Friday. Of those arrests, 16 of the defendants were black or Hispanic, two were Asian, and two were white, the Queens DA said.

The Bronx district attorney’s office on Friday night reported 10 arrests and 12 desk appearance tickets that stemmed from police enforcing social distancing guidelines, with all the arrests resulting in multiple charges.

According to the Bronx DA:

Both the Brooklyn and Queens district attorneys have said they will not be prosecuting social distancing arrests.

“Nobody wants a health crisis to fuel a criminal justice crisis,” Katz said in her statement.

The NYPD said it had over a million interactions with the public in its awareness and education campaign since the pandemic began, mostly without incident.

Mayor Bill de Blasio responded to the data in a press conference on Friday, saying the numbers were small compared to the city’s total population.

"It's so small,” he said about the number of arrests in Brooklyn. “I'm not belittling the experience that people go through at all, but it's such a small number," he said. "Let's put it in perspective in a city of 8.6 million people in the middle of a pandemic."

The mayor added that the disparity will be addressed.

“We're going to go back, clarify the protocols. More training for officers. More work with supervisors to make sure that they are attentive to these issues,” he said.

For other city elected officials, the data confirmed the suspicion that social distancing orders would not be equally enforced.

In a video press conference on Zoom on Friday, Public Advocate Jumaane Williams, who has previously criticized the focus on law enforcement when it comes to social distancing, called the numbers “abysmal.”

Williams said the coronavirus pandemic is causing “the magnification of social and infrastructure issues that have been here for a very long time. How we police black and brown communities is one of those.”

Police unions say officers should not be involved with social distancing enforcement and education at all.

Activists who protested this week agree.

”This is certainly unfair to the officers as well,” Williams said. “You are putting these officers in a very bad position as well.”

”Social distancing shouldn’t be based on a crime,” said Charles Billups, of the Grand Council of Guardians. “It should be more about educating people about health.”

The mayor said the NYPD must be involved.

“There is no way in hell we are going to be able to keep people safe if we don’t use strongest, best public safety organization in this country,” de Blasio said.

Some worry that confrontations over trying to save lives from coronavirus could result in officers tragically killing someone.