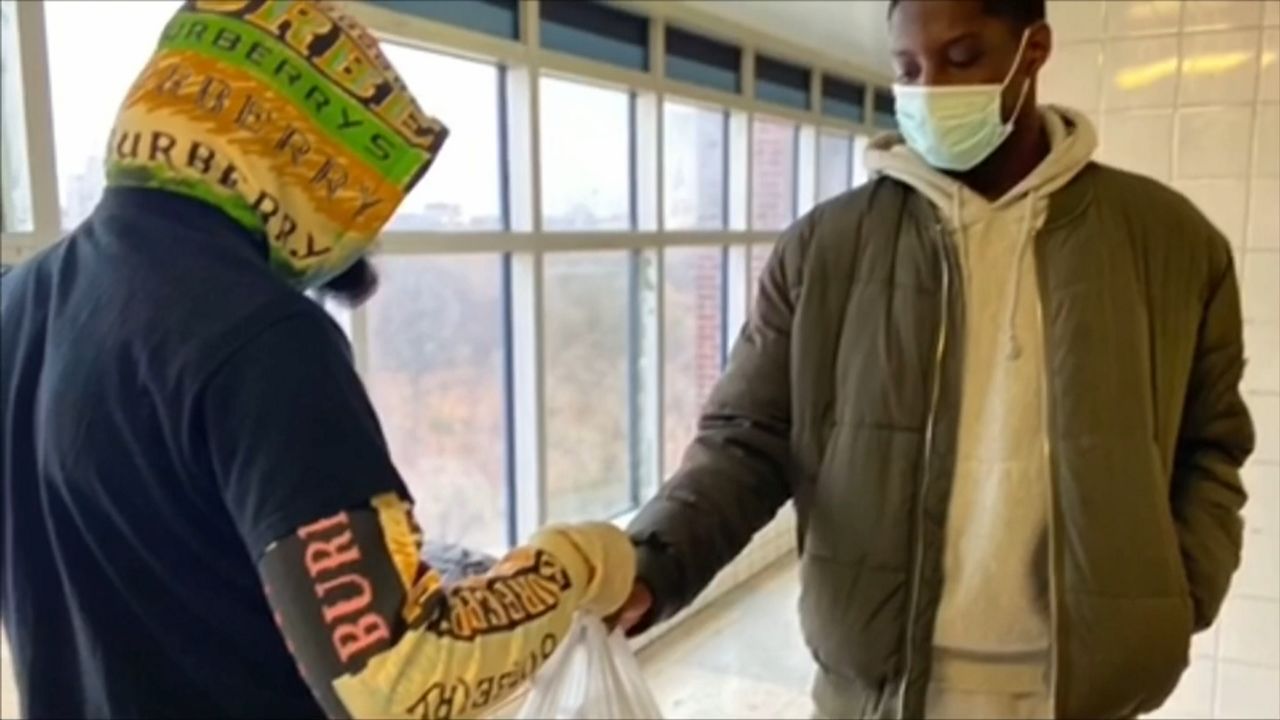 NEW YORK - Once locked up on Rikers Island, Jermaine Ferguson turned his life around and now he’s helping other formerly incarcerated people and their families during the COVID-19 pandemic.

Ferguson is handing out food to those who need it in the South Bronx.

“My pastor actually gives me food to give out into the community,” Ferguson said.

“I give them canned goods, they get gloves, they’ll get rice, sugar, juice, milk,” the 24-year-old added.

He’s a youth mentor who works for Friends of Island Academy, a non-profit organization that helps young people who have gotten into trouble. The goal is to get them back on the right track. Ferguson said handing out food to those who need it is an honor and a duty he must fulfill.

“I do it every week no matter what, nothing stops me. Yes I may be risking my life but I know I’m doing it for a cause and it’s helping the community,” said Ferguson.

Messiah Ramkissoon is the director of programming for Friends of Island Academy. The organization has been around for 30 years. It’s trying to continue its mission of helping young people in the city’s jail system, but it's been difficult after the correction department imposed a lockdown because of the coronavirus.

“As a result of COVID we have not been able to have as much access on Rikers Island to be able to get into housing areas,” Ramkissoon said.

For troubled teens and young adults who have been recently released, Friends of Island Academy is trying to do what it can to help them.

“We have been doing direct follow-ups with young people at home via phone, via zoom, via FaceTime, via Instagram chats,” said Ramkissoon said.

That’s to give advice not only on how to stay healthy, but even more basic, how to survive. That's because many of the young people they counsel do not have much.

“We have young people that our staff has actually been taking food to their steps, taking groceries to them during this time. We have been able to get certain young people gift certificates for DoorDash where they’re able to order food. Information about free internet bundles because we have young people who are living in shelters,” said Ramkissoon.

“For a lot of our kids who are displaced who are sleeping in the lobbies of hospitals and things like that this is a tough time for them,” the 36-year-old said.

Some have lost family members to the disease. Ramkissoon wrote a poem to encourage them to stay strong.

“You survived life before COVID-19, seen things no kid should see before 19. You will survive this chapter of insanity,” he vowed.

Ferguson said as a teen he never thought he’d have a good job, but he said being positive helped him to achieve success even after being on Rikers Island.

He said while people are on pause and in quarantine, now is a great time for a person to turn their life around especially those who have been incarcerated.

“Your mind and body is not put on pause so you can be able to, just do anything that’s productive and legal and helps to benefit your future that’s the message that I want to give to society and the youth,” said Ferguson.