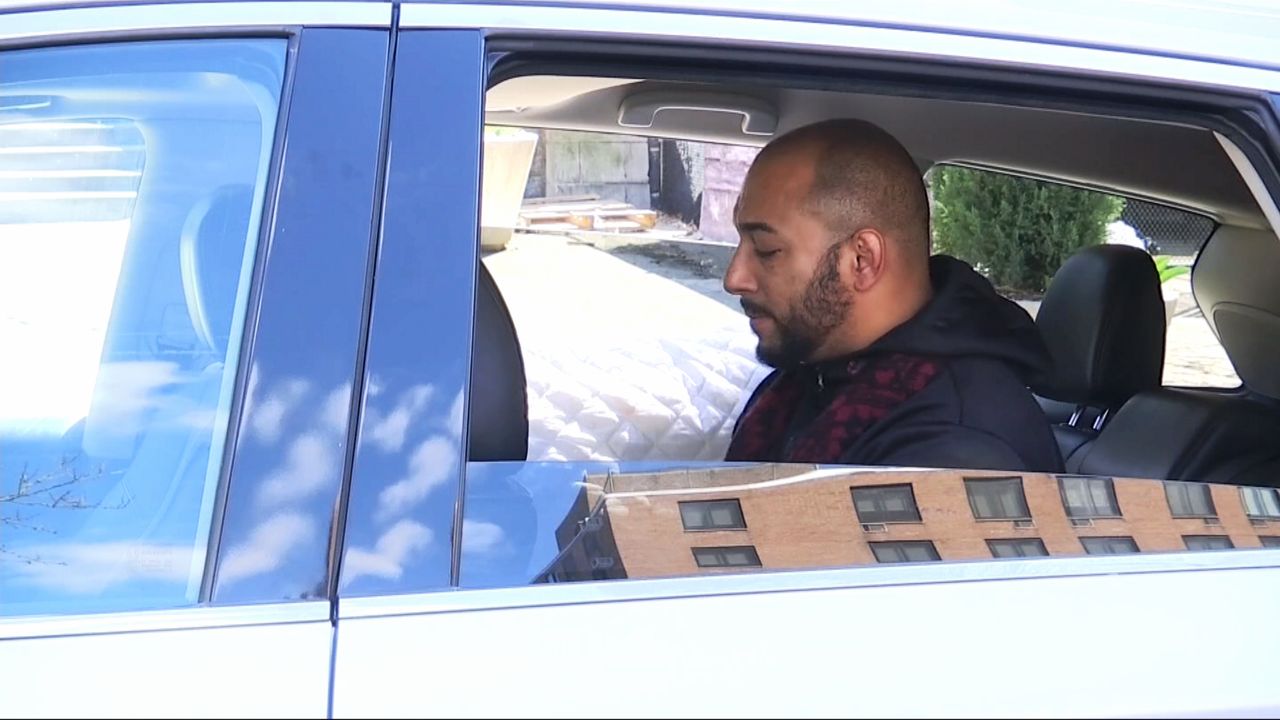 BROOKLYN, N.Y. - It’s always tough for people living on the margins to find housing in the city. For some, the coronavirus crisis is making the challenge even greater.

Damil Marin held up a pillow from inside his SUV, “Somebody gave this to me from the hospital,” he said.

Marin is living in his SUV outside of Brooklyn Hospital Center. His wife Jeymi Amador is inside, diagnosed with COVID-19.

He’s been living in the car since Tuesday when he says he, his wife and her toddler Zoey were kicked out of the East New York apartment into which they had just moved.

“About two hours later she collapsed from the stress of everything,” he said. “And she’s been admitted here since.”

Governor Andrew Cuomo has temporarily banned evictions for non-payment of rent, but it doesn’t cover cases like this.

The building’s owner, Mohammad Tutul says he never rented the apartment to Marin, whom he calls a squatter.

“This is very bad you know. The squatter coming in, they came to my property,” said Tutul over FaceTime.

He said he just signed a contract to sell the building and must deliver it empty. He says he thought it was until he checked the building last weekend and discovered the family had moved in. He says he feels like the victim.

He doesn’t believe the couple was scammed. He thinks they’re the scammers.

“It’s not uncommon in New York City for someone to see a house that’s vacant and then essentially break into that house, change the locks, and then fool some poor people into believing that they’re the landlord, give them a fake lease,” explained Legal Aid Society Staff Attorney Erin Neff. "And then the real landlord finds out and kicks them out."

Neff believes that could be what happened here saying Marin provided her with a lease and receipts from a company he says he paid to move in. It’s a company Tutul said he never heard of.

The Legal Aid Society is representing Marin and has an emergency court hearing with a judge on Monday admitting it’s a Hail Mary hope to have them stay in the apartment because of the coronavirus.

“No matter how hard things are she perceivers,” said Marin about his wife. “I’m really hoping carries out that attitude and that strength she has carries out.”

Marin says his step-daughter is now staying with his wife’s Mother, knowing the car wasn’t a safe place for her. He says he’s staying here outside the hospital where he walk up into Ft. Greene Park and see his wife through the window, talking with her on the phone.

“I’m gonna stay here cause I can’t fathom being anywhere else,” said Marin. “I don’t know where I would even go or what I would even do without my best friend.”

Marin says the Department of Homeless Services assigned him and his step daughter to a homeless shelter in Harlem, but that when he arrived there were ambulances there for people with COVID-19 and he didn’t think it was safe for Zoey so he left.

Residents of that shelter tell NY1 the staff is diligent about cleaning and sanitizing.