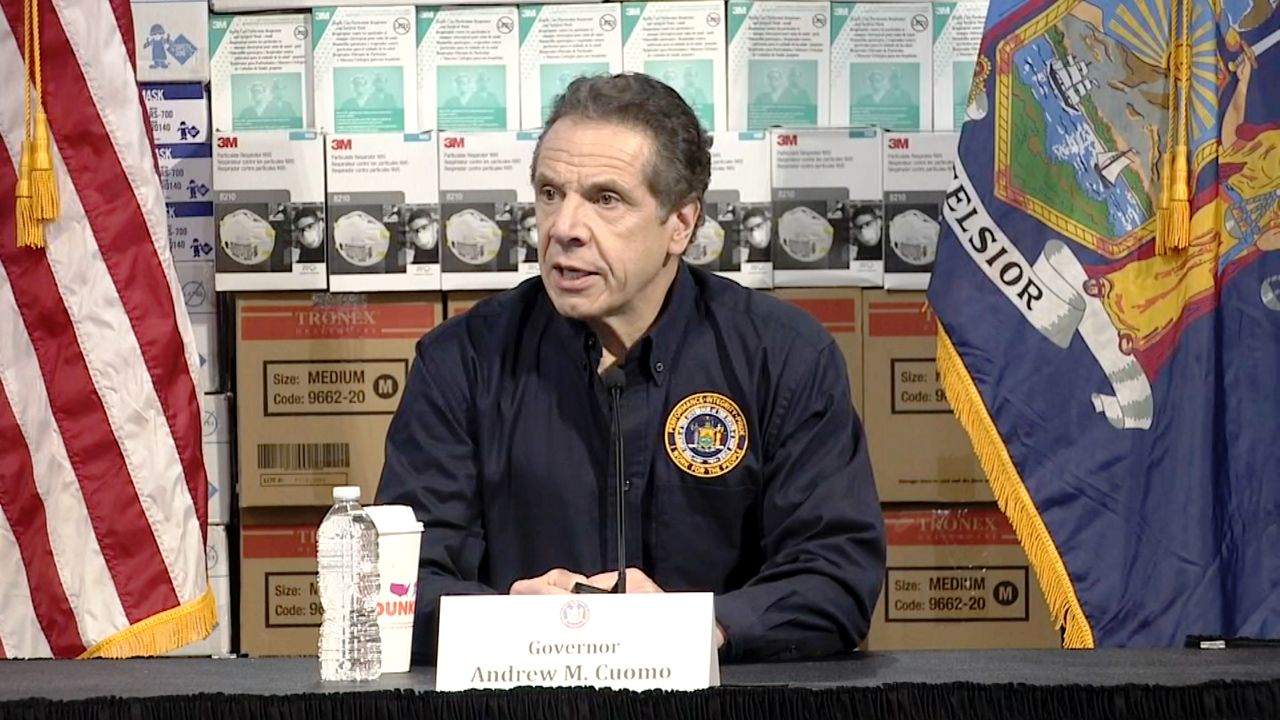 Cuomo: Rate of Coronavirus Infection in New York is Spiking

NEW YORK - Striking a much more alarmist tone than in previous days, Governor Cuomo says the coronavirus is spreading, fast. And he warned the nation that what New York is seeing could soon be a reality across the country.

As of Tuesday, at least 210 deaths in the state have been linked to the coronavirus.

The borough-by-borough breakdown, with some fluctuation in the numbers:

The numbers of cases are expected to only increase exponentially over the coming weeks and months as more tests are conducted.

Cuomo says 3,324 patients are currently hospitalized, 756 of those are in intensive care units.

The rate of hospitalization in the state is now 23 percent.

Speaking from the Javits Center in Manhattan, Cuomo says the focus remains on ramping up hospital capacity and equipment, especially ventilators.

The governor says it's expected the apex of the outbreak in New York is likely 14 to 21 days away.

At the Javits Center in New York City making an announcement. WATCH: https://t.co/ylMDR0U440

Calling New York "the canary in the coalmine," Cuomo said the state has the highest and fastest rate of infection.

He said New York's battle could replicate across the country and had strong words for the federal government, noting the recent shipment of 400 ventilators is a mere drop in the bucket.

Cuomo said thousands more from the federal stockpile are needed and added he would take full responsibility for shipping them elsewhere once New York's need for them subsides.

The governor’s criticism drew the ire of president Trump, who claimed the state had a chance to build up its stock of ventilators in the past but failed to.

“I'm not blaming him or anything else, but he shouldn't be talking about us," Trump said at his own news conference. "He's supposed to be buying his own ventilators. We're gonna help, but if you think about Governor Cuomo, we're building him four hospitals, four medical centers. We're working very, very hard for the people of New York. We're working along with him and then I watch him on the show complaining. And he had 16,000 ventilators that he could've had at a great price and he didn't buy them."

The president is referring to a 2015 report commissioned by the Cuomo administration which concluded they should not buy the additional ventilators at a cost of more than $500 million, because that money is better spent on the state’s immediate healthcare needs, and there wouldn’t be enough technicians to operate those ventilators.

Statement from @Dani_Lever in response to @realDonaldTrump criticism of @NYGovCuomo about stockpiling ventilators: pic.twitter.com/mBL4XYrwFc

The governor says the state will need upwards of 140,000 hospital beds to treat coronavirus patients, up from a previous estimate of 110,000.

On Monday, Cuomo toured the Javits Center which is being converted into four emergency hospital facilities by the Army Corps of Engineers. Cuomo clarified Tuesday that the Javits Center, which is being converted into a 1,000 bed hospital, will not be used to treat COIVD-19 patients. Instead, it will be for overflow. Acute care for the virus will be handled at actual hospitals, but other patients can be brought to the Javtiz Center in order to free up hospital beds elsewhere for those who have coronavirus.

As New Yorkers continue the new normal of quarantining, the governor says he understands the need to balance the job of saving lives and getting the economy moving again.

Cuomo said elected officials will need to refine the public health strategy while getting younger, recovered and tested people back out in the workforce.