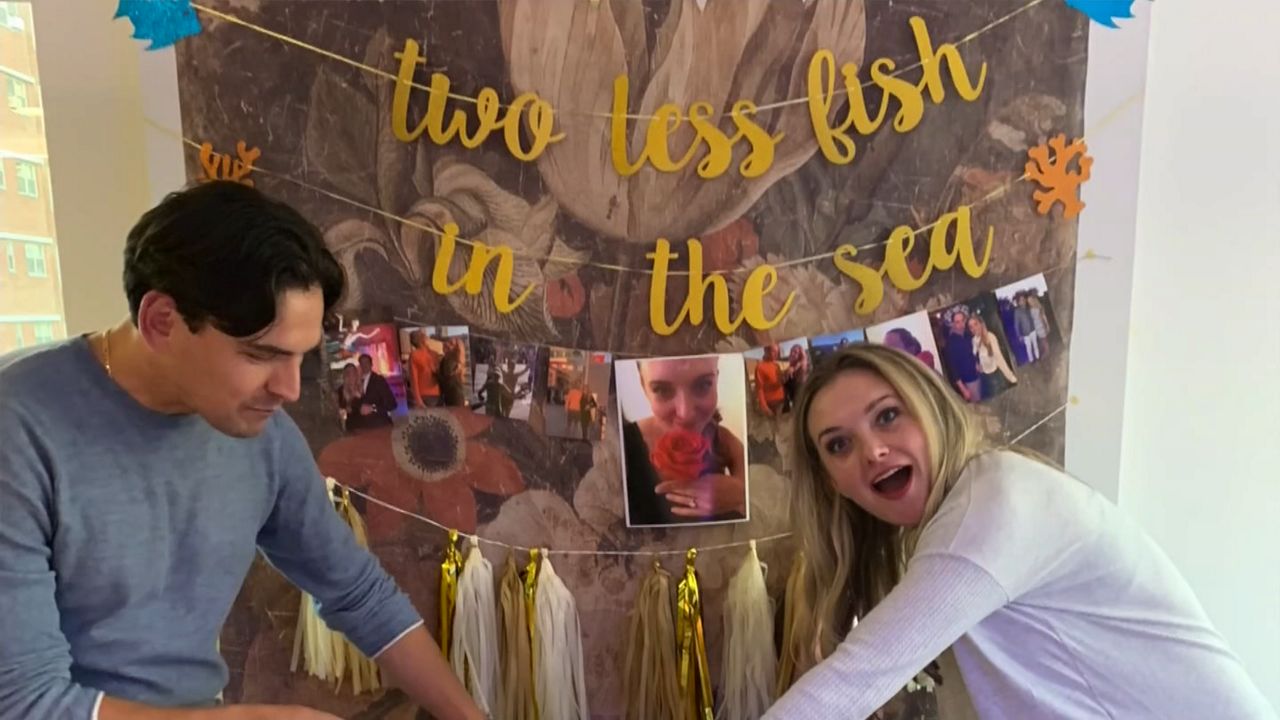 “I literally woke up the next morning and did it right there on the spot," said David Dougherty Jr. about popping the question, "I couldn’t wait any longer.”

“Had no idea it was coming," his fiancé Madeline Fauntleroy picked up, "probably the only way he could have done it that would have surprised me at that point.”

The couple says the timing of their engagement in September was perfect as was the date for their wedding: a week from Saturday.

The table numbers, menu and escort cards were set.  They were a go until Wednesday night. That’s when Dougherty woke up in a cold sweat.

"Oh totally, I was up all night," said Fauntleroy.

"True," Fauntleroy responded, "We were still on for marriage, it’s just the wedding was not happening."

The concern is that 85% of the guests are from out of town, many of the 200 already canceled and the couple was putting undue stress on those they love.  So, they pushed the big event at the Lighthouse at Chelsea Piers to a date next October.

“We’d be lying if we said it didn’t totally suck," Fauntleroy said, "It really, really has been extremely unfortunate.”

"I don’t think we even have an idea of how bad its gonna be," explained longtime events planner Jeff Stillwell of Stillwell Events.

Stillwell says venues have lost millions of dollars in Corona-related corporate cancellations over the last couple of days; some are already laying people off.

Gatherings under 500 people can still legally take place, but venues must keep attendance to half-capacity.

Weddings for the most part he says are being rescheduled rather than canceled when dates are available.

“They’re gonna to start being gobbled up very quickly because all of these people who booked for the month of March, April and now even May are starting to postpone because of the uncertainly of everything,” said Stillwell.

"We’re not sure when the city’s gonna shut down," said Sahar Baharloo who came to the City Clerk’s Office Friday to get hitched.

They were among several couples NY1 News spoke with Friday who moved their wedding date up out of concern for the Coronavirus and possibly needing to get on their partner's health insurance.

“But also if one of us sick and hospitalized,” added Baharloo's partner Duncan McRoberts, "It’s important to have visitation rights.”

Dougherty and Fauntleroy decided they'd only delay the reception and will still have the ceremony on March 21st.

"I can’t go another week not marrying her," said Dougherty.

Even if it’s just the two of them for the ceremony next week, the two are trying to keep it all in perspective.

“Knowing that we still have each other, we have our health, we have our happiness," said Dougherty, "We have this amazing city that is going to persevere.”