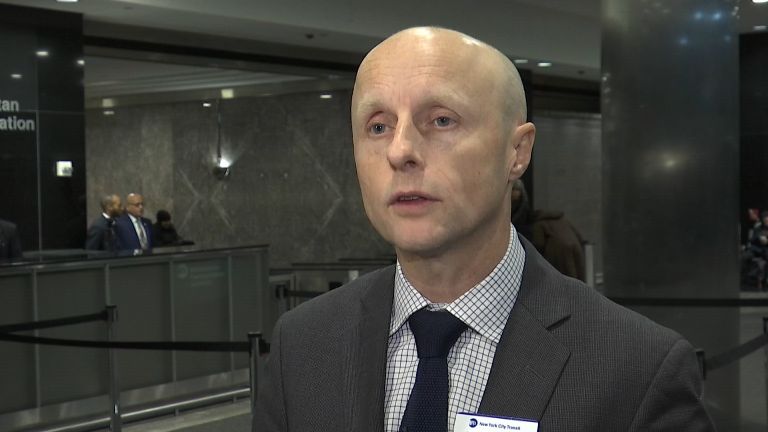 Hailed as the hero of the New York City subway turnaround, Transit President Andy Byford on Thursday announced he will resign from his post.

Andy Byford was all smiles as he stepped off a train at Bowling Green in lower Manhattan to take command of a transit system in crisis.

Two years and one week later, the New York City Transit president quietly announced Thursday that he will step down from his post next month, ending a tenure that saw dramatic improvements in bus and transit service and won the good will of riders, earning him the nickname, "Train Daddy."

"Riders told me, 'Wow, you know, subways have gotten better. I really see an improvement. I'm not waiting as long, the trains are moving faster,'" MTA Board Member Andrew Albert said.

But Byford privately complained of being micromanaged by Gov. Cuomo, especially during the project to repair the L train's East River tunnel, and a major reorganization stripped him of control over bilions of dollars in reconstruction projects.

Those tensions spilled out in public in October, when it was revealed that Byford had submitted a resignation letter but was talked into rescinding it.

Cuomo subsequently had nice words for the transit executive, whom he recruited to the MTA, a state agency, but the relationship could not be repaird.

"It came to the point where he was relegated to not the major status that he wanted and I think he was entitled to," Albert said.

Word of Byford's resignation leaked as the MTA board met in executive session at its monthly meeting.

In a statement, Byford said, "I'm very proud of what we have achieved as a team over the past two years and I believe New York City Transit is well-placed to continue its forward progress now that the MTA has a record breaking $51.5 billion Capital Program in place. I'm very grateful to Governor Cuomo, Chairman Foye and members of the Board for giving me the opportunity to serve New York and to head up North America's largest transit system."

NEW: this is a copy of Andy Byford’s resignation letter pic.twitter.com/SUmipuTFel

Byford, who was born in Britain, came to the MTA after running several transit systems around the world.

He laid out a blueprint for transforming the transit system, a plan he called Fast Forward, upgrading the subway's ancient signals and bringing elevators to more subway stations.

He made trains run faster, reducing delays and overcrowding. Eighty percent of subway trains no reach their destination on time, up from less than 60 percent when he took over.

Byford developed a rapport with workers, riders and politicians, and became the face -- and the voice, in pre-recorded station announcements -- of the transit system.

In his resignation letter, Byford cited his reduced role with the reorganization, saying it left him with nothing more than the "day-to-day running of service."

"I have built an excellent team, and there are many capable individuals in Transit and others within the MTA family, who could perform this important, but reduced, service delivery role," Byford said.

Byford said he was confident there's a team and funding in place to build on his accomplishments. His last day will be February 21.

In a tweet, Mayor Bill de Blasio called Byford's resignation a "real loss for New York City's subway and bus riders." He went on to say "The MTA needs people like Andy Byford — now more than ever."

City Council Speaker Corey Johnson echoed the mayor's sentiments in a tweet and called for municipal control over the city's transit system.

Queens' Awkwafina the New Voice of the 7 Train?