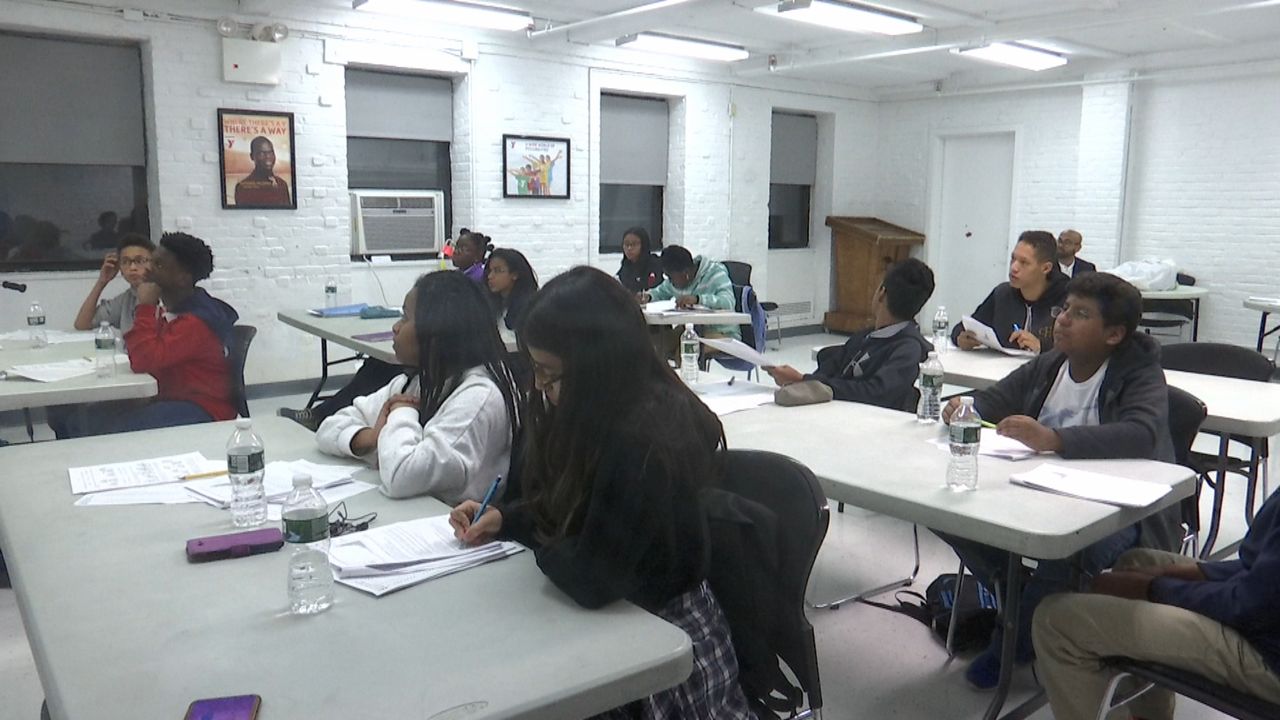 At the Harlem YMCA, students are preparing for the high stakes test that determines who gets into eight elite city public high schools, including Bronx Science and Stuyvesant.

"The fact that they make it so that it's like a classroom, and there's packets, and there's a teacher teaching me it, it makes it a lot easier to study for the exam," one of the students, Hodaya Deberzion, says.

The students have been studying with instructors from Khan's Tutorial, a private test-prep company, but they didn't have to pay the fee, which is about $2,500.

These classes, for students from low-income homes, are free, thanks to a program called DREAMChasers. It was created by attorney and Bronx Science High School alum Jason Clark after visiting his old school and noticing the lack of diversity.

"I always knew it wasn't that the students couldn't do the work. It really had to do with access to resources," Clark says. "I knew that kids in Harlem, in southeast Queens, in the Bronx, I knew they could do it if we gave them an opportunity to have some of those resources that other folks have."

Critics of the Specialized High Schools Admissions Test, known as the SHSAT, have long said the same thing, but the school system's efforts to better prepare black and Hispanic students have fallen short. So Clark recruited mentors, got Khan's Tutorial to provide the classes at a discount, and raised money so the students did not have to pay anything.

Last spring, just seven black students were admitted to Stuyvesant High School, but one of them was from DREAMChaser's first class.

"I've always felt that if you wanna have some type of change, you've got to take the lead," Clark says.

Fourteen students are enrolled in DREAMChasers this year. Hodaya Deberzion travels from Coney Island to attend the classes.

"It's worth it. By some miracle my school schedule doesn't get in the way of it and it doesn't feel that hard because it's just two train rides, but I do it," she says.

Many previously had little or no access to test prep before this program.

"One of my close friends had a book for the SHSAT test prep, but the book was really old so it wasn't that powerful of a material," Tohra Belton says.

Others said these courses had gone further than classes they'd previously taken.

"They only taught me surface levels, the basics. This one really delved deep," Tyler Goodman says.

Parents, too, expressed how hard it is to find free programs as intensive DREAMChasers. Students attend twice a week—Fridays from 4:30 p.m. to 7 pm, and Saturdays from 9 a.m. to 1 p.m.

The annual test, taken by about 20,000 students, is less than two weeks away. The DREAMChaser students say they're ready, and that they learned more just test prep skills.

"If there's a chance, like one in a million, you know, just take your chance," student Jack Van Clief says.

The program is set to expand to Southeast Queens in the coming year. To apply go to dreamchasersnyc.com. The deadline is Nov. 2.