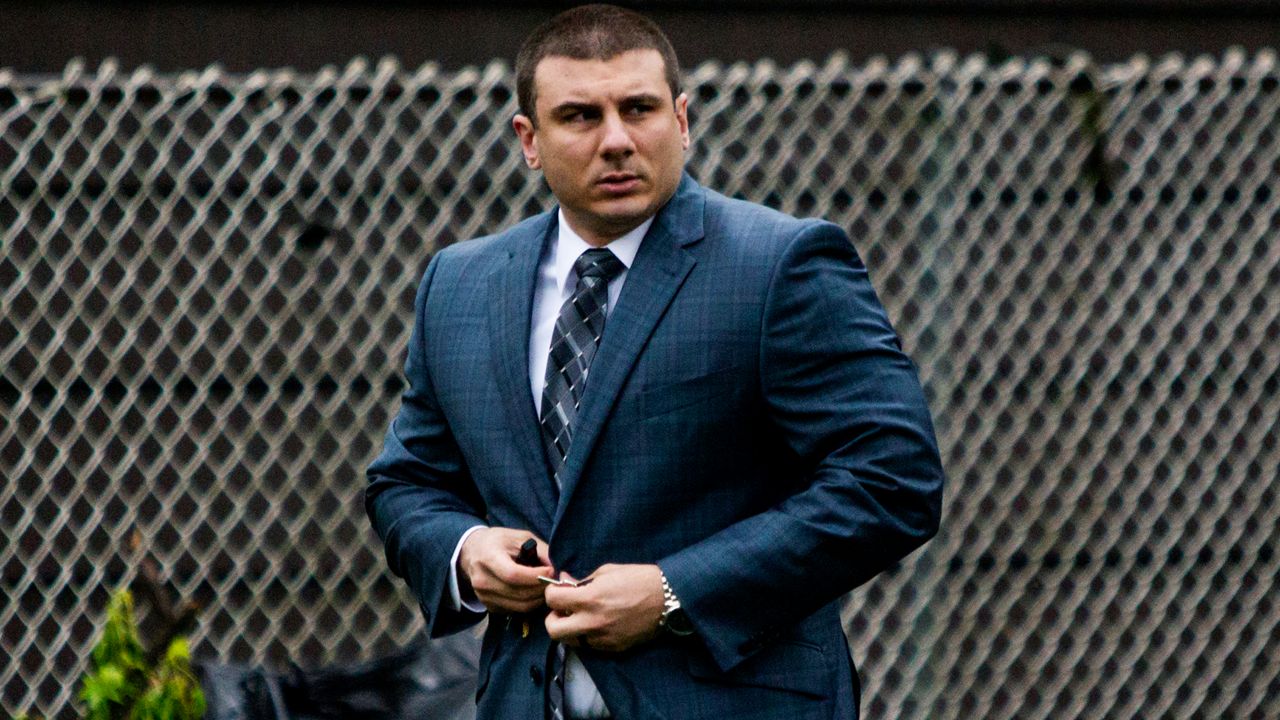 Five years after the death of Eric Garner, New York City Police Commissioner James O'Neill announced Monday that the officer at the center of the case will be fired from the department.

Speaking at police headquarters in lower Manhattan in the afternoon, O'Neill said the decision to dismiss Officer Daniel Pantaleo was made within the last few days, and he expressed anger and regret for both the officer and Eric Garner.

"It is clear Daniel Pantaleo can no longer effectively serve as a New York City police officer. In carrying out the court's verdict in this case, I take no pleasure," O'Neill said.

Police Commissioner O'Neill says the decision to fire Daniel Pantaleo was hard, but it wasn't the hardest thing he's had to do in his career at the NYPD. pic.twitter.com/9Ok6VlHBLB

Growing almost emotional at times, O'Neill took pains Monday to defend his police force, describing how difficult and dangerous their jobs can be, and even faulting Garner for resisting arrest while noting Pantaleo's commendable service record. He seemed to be sending a message to the rank-and-file.

O'Neill said he thought Pantaleo's use of the banned chokehold as he wrestled with Garner was a mistake that could have been made by any officer in the heat of an arrest. But he said it was clear Pantaleo had broken department rules and "can no longer effectively serve as a New York City police officer."

Pantaleo placed Garner in a chokehold for seven seconds while trying to arrest him for allegedly selling loose cigarettes on the street on Staten Island in 2014. During the struggle, Garner said 11 times he couldn't breathe, and then died. The officer's defense attorney said it was Garner's poor health that led to his death, but the medical examiner's office said a chokehold contributed to Garner's death.

Rosemarie Maldonado, the NYPD Deputy Commissioner of Trials who, after a department trial earlier this summer, recommended Pantaleo be fired for putting Eric Garner in a fatal chokehold, said that officer's recount of the 2014 incident was "untruthful."

O'Neill cited Maldonado's report in his announcement Monday and agreed with the judge's recommendation. The police commissioner said it was his decision alone, based on the testimony and evidence from the departmental trial, even while acknowledging the pressure from all sides.

In the 46-page recommendation, Maldonado described Pantaleo as "disingenuous" in his accounts to investigators five years ago.

She also qualified other officers who testified about the case as "unreliable."

In the report, the judge said despite Pantaleo's denial of using a banned chokehold, "His actions were completely consistent with his own erroneous and restrictive definition of the Patrol Guide prohibition."

Pantaleo did not testify in his own defense during the departmental trial, and was suspended shortly after the judge recommended he be fired.

"This was the police commissioner's decision. He based it on a trial. This was his decision. We talked about the timing and how to prepare the city. But he made the decision," de Blasio said.

Mayor Bill de Blasio on the firing on Daniel Pantaleo: "Justice has been done, and that decision has resulted in the termination of Officer Pantaleo." pic.twitter.com/OQ6znFpier

When asked about possible repercussions by police, the mayor said, "The people of this city will not accept any slowdowns by any public servant. It is not legal to suggest a work slowdown, we have faith the men and women of the NYPD will do their jobs."

Pantaleo had been on the NYPD payroll for the last five years, on modified duty and without his gun.

Garner's family, including his mother, Gwen Carr, and daughter, Emerald Snipes Garner, praised O'Neill's decision vowed to continue advocating for the other officers involved in the arrest to be fired.

Reacting to Daniel Pantaleo's firing from the #NYPD, Gwen Carr, the mother of Eric Garner, says he can get another job.

Carr also vows to continue advocating for the other officers involved in the 2014 arrest to be fired. https://t.co/a45JMv1A62 pic.twitter.com/SHCEjyLqz0

#EricGarner's daughter tells reporters: "We will be going for the congressional hearings, we will be trying to reopen the case. We will be going after the rest of the officers involved." pic.twitter.com/D5uZq2in5y

But at the same time, the Garner family and other police reform advocates said Pantaleo should have been fired years ago.

The mayor has blamed the Department of Justice for the delay, insisting that his hands were tied because the federal government asked his administration to not take any action against Pantaleo while it investigated the case.

Almost immediately after the decision was announced, Pantaleo's attorney said they would file an Article 78 to appeal the firing.

Pantaleo, who was out of town, didn't publicly comment on his firing. Pantaleo's attorney, Stuart London, said NYPD brass last weekend retracted an offer that would have allowed Pantaleo to leave the force with a full pension.

"The verdict in this case should have been rendered on the evidence in that courtroom; it was rendered on politics," London said.

In response to the decision, Patrick Lynch, the president of the Police Benevolent Association union for uniformed officers, said, "Police Commissioner O'Neill has made his choice: he has chosen politics and his own self-interest over the police officers he claims to lead.  He has chosen to cringe in fear of the anti-police extremists, rather than standing up for New Yorkers who want a functioning police department, with cops who are empowered to protect them and their families."

"The damage is already done. The NYPD will remain rudderless and frozen, and Commissioner O’Neill will never be able to bring it back. Now it is time for every PO in this city to make their own choice." pic.twitter.com/TAsNyXQG3J

Lynch declared that the decision would undermine morale and cause officers to hesitate to use force under any circumstances, for fear they could be fired.

"The job is dead!" Lynch said at a news conference, standing in front of a police department flag that had been hung upside down.

His voice cracking with anger, Lynch called Pantaleo an "exemplary" officer and called for union members to participate in a no-confidence vote on the mayor and commissioner.

In his announcement, O'Neill acknowledged that the rank-and-file of the NYPD would likely be angry with him.

Timeline of events in the Eric Garner case

July 17, 2014: Eric Garner dies in a confrontation with Pantaleo after the officer placed him in what appeared to be a chokehold. Police had suspected Garner of selling loose, untaxed cigarettes on the street on New York City's Staten Island. The confrontation is caught on amateur video, including Garner’s words "I can't breathe," which become a rallying cry among protesters.

Sept. 19, 2014: Dr. Michael Baden, a forensic pathologist hired by Garner's family, agrees with findings that a chokehold caused Garner's death. Patrick Lynch, the president of the Police Benevolent Association, says that Pantaleo used a "seatbelt" maneuver and that the neck compressions were likely caused by lifesaving medical procedures.

Dec. 20, 2014: A gunman ambushes two New York City Police officers in a patrol car and shoots them to death before killing himself. Authorities say Ismaaiyl Brinsley announced online he was planning to shoot two "pigs" in retaliation for Garner’s death.

July 11, 2016: Garner's siblings lend their voices to a song titled "I Can't Breathe" that was released for the second anniversary of his death.

June 21, 2017: Garner's family, along with the Rev. Al Sharpton, meet privately with Justice Department officials. They are told the investigation is still active.

July 16, 2018: The New York Police Department says it will allow disciplinary proceedings against Pantaleo, saying it's run out of patience with federal authorities' indecision.

May 13, 2019: After many delays, the NYPD disciplinary trial begins for Pantaleo.

May 14, 2019: The NYPD official in charge of training recruits says the restraint technique Pantaleo used on Garner "meets the definition" of a chokehold. The practice was banned in the 1990s.

June 6, 2019: The disciplinary hearing for Pantaleo ends. It can take up to three months before an administrative judge recommends a punishment to the police commissioner.

July 16, 2019: Federal prosecutors say they will not bring charges against Pantaleo, a decision made one day before the five-year anniversary of Garner's death.

August 14, 2019: Sources: The number two official at the NYPD accepts a judge's ruling — First Deputy Commissioner Benjamin Tucker has reviewed the findings and has passed them to NYPD Commissioner James O'Neill.