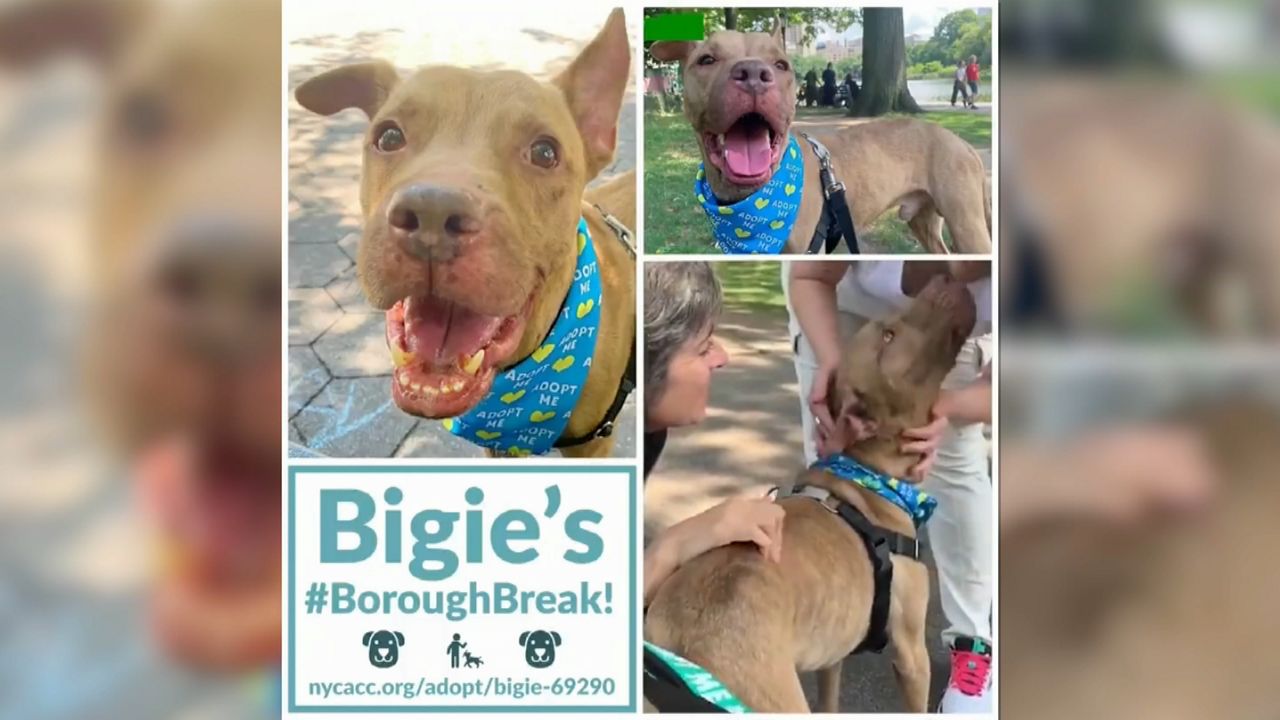 NYCACC is trying a new approach to getting dogs adopted and out of the shelter for most of the day.

5-year-old Bundles is a sweet dog who loves to cuddle and is great with kids, but for some reason he has been at the NYC's Animal Care Center in East Harlem for nearly four months.

Sadly, he's been repeatedly passed over for adoption despite his sweet nature and the adorable bowtie he wears around his neck.

On Monday, however, thanks to a new New York City Animal Care Centers (NYCACC) program called "BoroughBreak," he was able to leave the shelter for a day date in Central Park with volunteer Emily Bowes. Within just a few minutes of leaving the shelter, Bundles started to get a little love.

The Brown family, visiting NYC from Ohio, stopped their car to ask about Bundles after seeing an "Adopt Me" patch on his leash.

All dogs who go out on day trips as part of the "BoroughBreak" program are outfitted with a leash and bandana that says they are available for adoption.

"I noticed your dog and I wondered what kind of breed he was," said Mr. Brown.

Interactions like the one with the Brown family are common among "BoroughBreak" participants. New York City's Animal Care Centers decided to try the initiative for the first time just a few months ago. So far, "Borough Break" has been an overwhelming success. The first day that it was offered, New Yorkers lined up to take part in the program.

Because the program is so new, however, they only allow up to five dogs a day to go out on a "Borough Break" and it's only offered at its Manhattan facility at this time.

Through the program, volunteers or prospective adopters are able to take dogs out of the shelter for day trips to spend time outdoors or even inside their hosts' home.

Officials at NYCACC said the experience gives the dogs a few hours away from the shelter so they can socialize and have a good time.

One benefit of the program is that "BoroughBreaks" give potential adopters one-on-one time outside the shelter to see if a dog is really right for them. The program helps showcase how the dogs are outside of the shelter. The day dates also provide the dogs with stimulation and enrichment.

Having volunteers and potential adopters out on "BoroughBreaks" across the city has also helped them garner new volunteers for the program.

Emily Bowes, a borough break first-timer, lives in Long Island City and already has two adopted dogs at home. Still, she wanted to find a way to help more homeless dogs even if she couldn't feasibly bring another one home.

She told NY1 that "BoroughBreaks" was the perfect fit for her.

"I thought this was a good way to kind of get the dogs out and let them have a good day and play a small part in giving them something to look forward to," said Bowes.

She added that the program is perfect for people who love dogs but can't have one for some reason.

In the last few months, about 100 shelter dogs have participated in the "BoroughBreaks" program and about a dozen have been adopted as a direct result of the initiative.