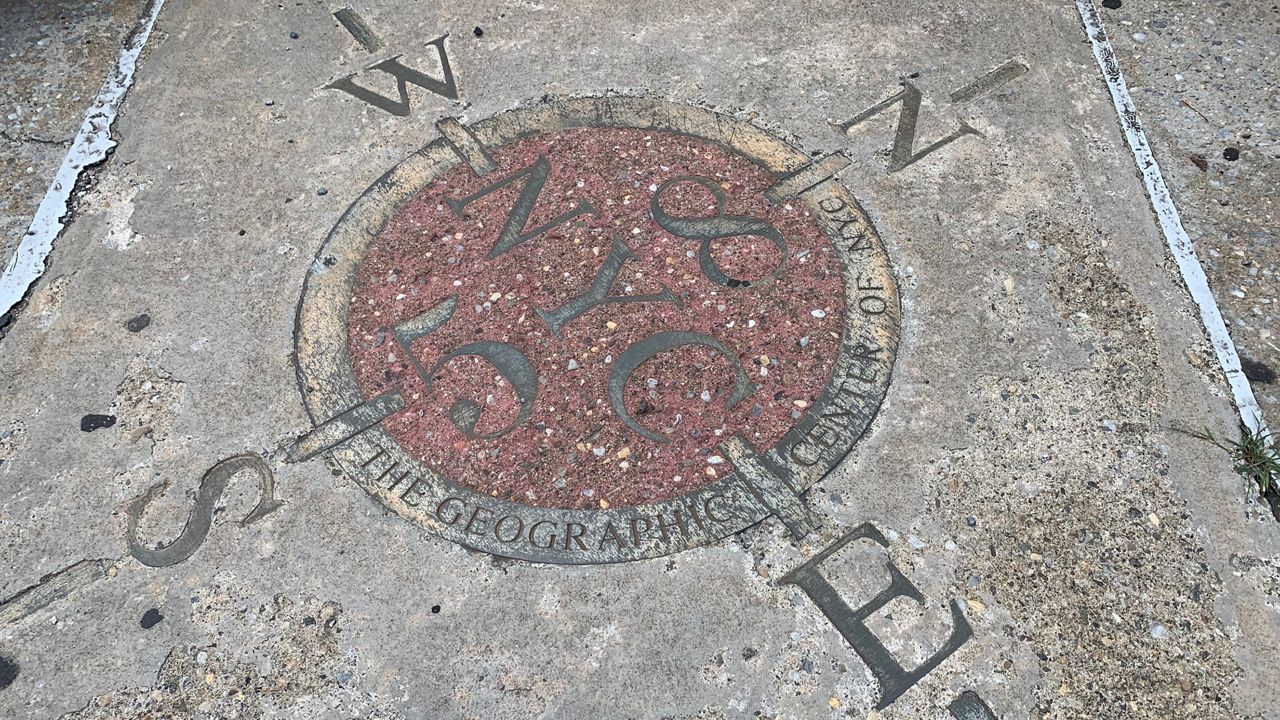 An ornate marker here in Queens claims to be the geographical center of New York City. Clodagh McGowan/NY1.

This Spot in Queens Claims to be the Center of NYC. But What's the Actual Geographical Center?

Where is the center of New York City? Depending on who you ask, you'll get different answers. But an ornate marker embedded in a traffic median declares it to be in Queens. Is that accurate?

Many drive past this traffic median on Queens Boulevard and 58th Street. Others walk and some cycle. Barely anyone notices this mysterious marker, declaring this exact spot the geographical center of New York City. (The center of New York City? Not quite. Clodagh McGowan/NY1).

Wanda Ramirez rides past it almost every day and says it's never caught her attention until now.

"That's really weird," the Woodside resident said. "I wonder who would put that there like that. I don't know."

The city's Department of Planning doesn't know, either. And, according to the agency, the geographical center of the city is actually several miles away and in another borough, in Bushwick, Brooklyn. (Congratulations, Bushwick, you're the center of New York City. Map courtesy of the New York City Department of Planning).

Still, even though the marker is erroneous, some residents don't seem to mind.

"It's a great landmark and a great neighborhood, and I really enjoy it," Woodside resident Charlie Harrigan said.

Just a few blocks away from the marker is Donovan's Pub. It's been in Woodside for more than half a century. There, there's no debate: Woodside is not just the center of the city; it's the heart.

"If it was up to me, I would say Woodside, 58th Street, Roosevelt Avenue is the epicenter," one pub patron said.

"I think it makes sense," said Christine McGovern, a bartender at Donovan's Pub. "Woodside is like the center of New York. I think there are so many different nationalities."

For many Woodside residents, where the city's actual geographical center lies doesn't really matter. But they say it's a good lesson: to look up from your phone once in a while and pay attention to what's right under your nose.