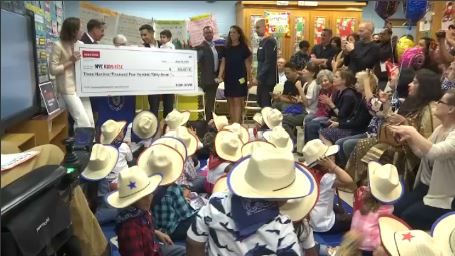 Food delivery service, Seamless, announced Wednesday it is depositing $300,000 into college accounts of about 6,000 kindergarten and first grade students. That amounts to about $49 each.

All of the students participate in the "NYC Kids RISE Save for College" program, which aims to economically empower kids through financial literacy.

Seamless raised the money by asking patrons in February to round their food bills up to the nearest dollar so the company could make the donation.

"It's a head start I think every kids needs to feel inspired and encouraged that they can make their dreams going to college come true,” said Jessica Burns, vice president of GrubHub, which also operates Seamless.

Seamless made the announcement during the kindergarten Stepping Up ceremony at P.S. 69 in Jackson Heights.