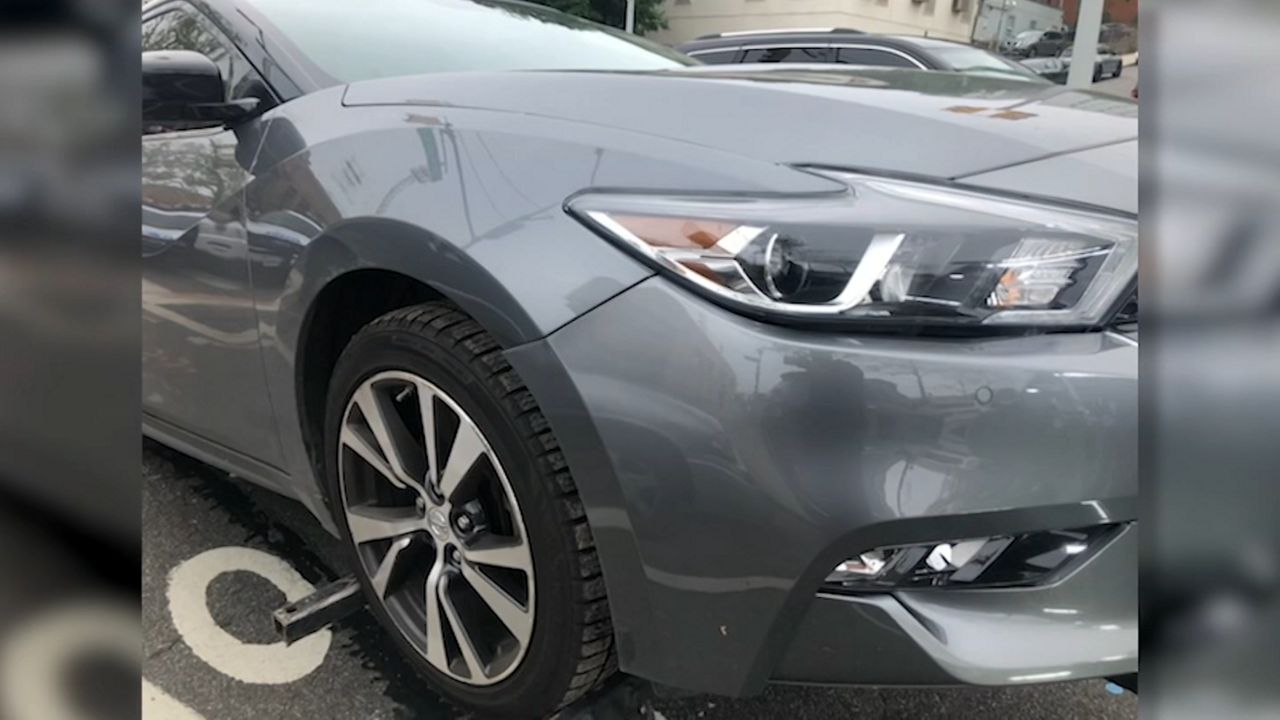 An NYPD officer's vehicle as it was repossessed on Staten Island on May 30. Photo courtesy of Jose Rodriguez.

A Tow Truck Driver Repossessed an NYPD Officer's Car. Then, He Ended up in Handcuffs.

Jose Rodriguez has been a repo man for three years.

"It gets crazy sometimes," he said.

But he said he experienced nothing as crazy as what happened May 30, when he was driving near the 120th Precinct stationhouse and came across a Nissan Maxima wanted by the bank because of three missed payments.

He said he logged the Maxima into his tracking system, lifted it onto his tow truck and was about to walk into the stationhouse to notify police when a green pickup pulled in front of him.

"I was stopped by one officer over there, saying, 'Hey, that's a police officer's car,' with a police sergeant that was off-duty that I didn't know — with him completely blocking me in. He told me, what I'm doing? 'You got to drop the car,'" Rodriguez recalled, standing near the scene of the incident.

Rodriguez said the Nissan's owner showed up, offering to make his back payments.

But the repo man said he told them it wasn't that easy: once a car is on the tow truck and logged in, it's the bank's property.

Rodriguez said police then surrounded him, accused him of auto theft, and arrested him for possession of stolen property — a felony.

"This is totally wrong. This should have never happened," said Rodriguez's boss, Anthony Destefano.

Rodriguez said one officer reached into his truck to take his surveillance cameras, but not before one of the cameras snapped a photo. The officer's hand and face can be seen in the background. Rodriguez says he has the image because the camera immediately sent it to the cloud.

The repo man said the officers removed the Nissan from his tow truck, drove it away, and took him into custody, where he spent more than 20 hours in jail. When he appeared in court, the felony charge disappeared, replaced by misdemeanor charges of falsifying documents and possession of police scanners, allegations he denies.

But his truck has still not been released. It was still sitting on Richmond Terrace, immobilized by a boot, eight days after the May 30 incident. And he's still waiting for the return of everything taken from him, including his phone, laptop, iPad, and cameras.

When asked about the incident, the NYPD said, "A male victim stated to police that an unlicensed tow truck was in possession of his vehicle without authorization” and that after a “police investigation,” Rodriguez was arrested and charges were filed.

Rodriguez has already retained an attorney and says he is contemplating moving ahead with a lawsuit against the NYPD.