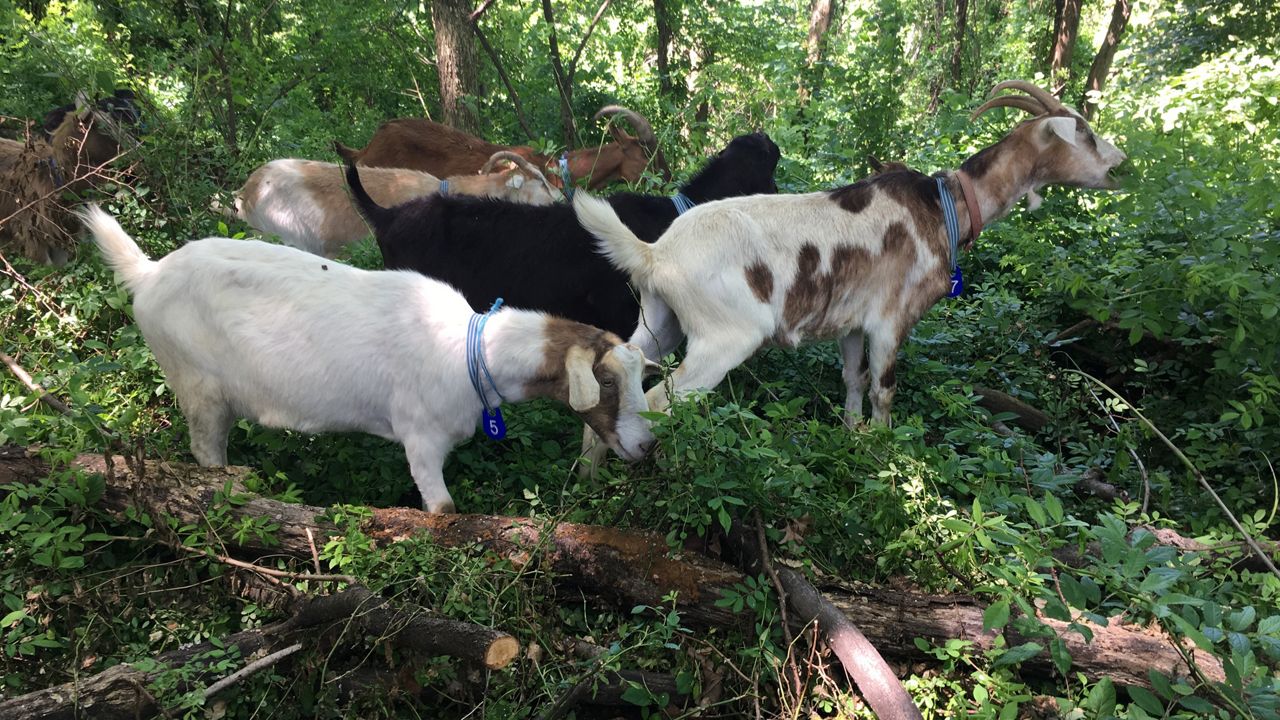 In a city where unusual sightings are a usual occurrence, it takes a lot to stop New Yorkers in their tracks. So it was quite a sight Tuesday afternoon to see hundreds of people holding smartphones and cameras, snapping photos of the city's newest celebrities.

"I've taken like thousands of pictures of goats already," one said

Yes, goats, two dozen in all, now living in the heart of Riverside Park on Manhattan's Upper West Side. They arrived Monday for a kind of working vacation, allowed to roami a fenced-off and patrolled area from 119th to 125th streets to feast on weeds threatening Riverside's native plants. (Retired, but not done: Some goats from upstate, done breeding and milking, are now helping clean up Riverside Park. Michael Scotto/NY1.)

"For them it's an all-you-can-eat buffet," Riverside Park Conservancy President and CEO Dan Garodnick said. "For us, it is critical horticultural care that we need in a part of the park that has proved challenging."

The goats are here at Riverside Park, and @DanGarodnick has never looked so happy standing at a step and repeat @NY1 pic.twitter.com/K4SbAry96F

According to the park, goats eat 25 percent of their body weight every single day. The Riverside goats weigh between 100 and 180 pounds, which means each is eating between 25 pounds and 45 pounds of leaves daily.

The weed-eaters, with names like Chalupa and Cheech & Chong, will stay for about a month and then be replaced by four other goats through mid-August.

They're all retired — meaning they don't make milk or breed anymore — and normally live on a farm in upstate Rhinebeck when they're not performing similar eating missions in other parks.

"Everything the world doesn't want, goats love," said Larry Cihanek, who owns Green Goats, the farm that provided the goats. "Poison Ivy. Anything with thorns." (This isn't the first time New York City has turned to goats to help clean up a park. In 2016, goats were hired to chomp down in invasive weeds and plants in Prospect Park. Michael Scotto/NY1.)

The Riverside Park Conservancy "hired" the goats and hosted Tuesday's celebration to welcome them. It was attended by hundreds of people, including dozens of amazed school children.

"I'm writing 'Go Goodie Goat,'" said one student as he scrolled a chalk message on a park walkway.

It was the kind of day that brought New Yorkers together, to take a look at something that was both strange and endearing:

"I thought it was weird but it was really cool," one student said.

"Everybody is smiling. You don't see one sad person here."

All trying to capture a unique moment in this GOAT city.