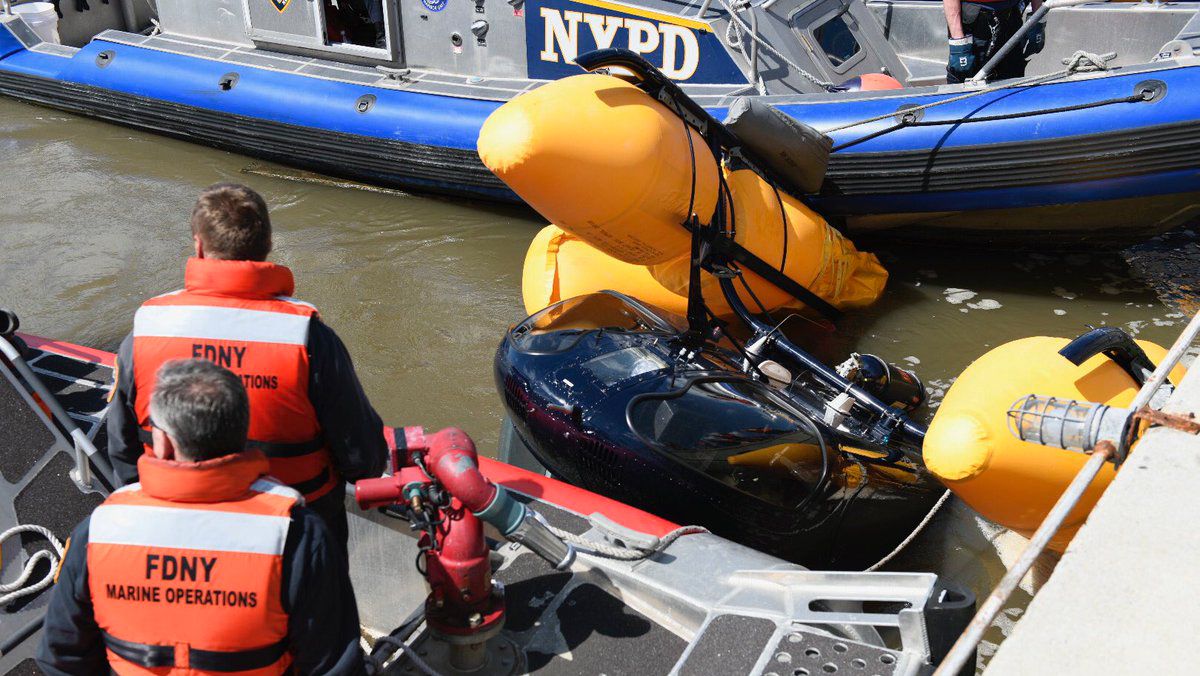 Emergency crews responded after a helicopter crash landed in the Hudson River near 30th Street.

The 34-year-old pilot was the only person on-board when it happened around 2:30 p.m. Wednesday afternoon.

He suffered a minor hand injury, while a dock worker slipped and injured his wrist while trying to get out of the way of the aircraft, according to the NYPD.

#NYPD Harbor secures a helicopter that fell into the Hudson River moments after taking off from the W 30th Street heliport. The pilot was uninjured and safely removed to land by a nearby passenger ferry. pic.twitter.com/3SZtpByEe7

Sources tell NY1 the helicopter, which is operated by a charter company, was coming into the heliport from Kennedy Airport.

"As he was making his approach, he crashed landed approximately 150 feet from the helipad," FDNY Deputy Assistant Chief Michael Ajello tells NY1. "He was able to deploy his flotation device. He was able to get out of his helicopter, stand on the pad. There was a passing boat that picked him up and brought him into the heliport."

We were the first units to arrive on scene of the helicopter in the Hudson River. #FDNY Firefighter Chris Morgan and I entered the helicopter in the water to make sure there were no additional passengers -FF Tim O'Neill, #Rescue1. Read more: https://t.co/TedcM8cCzN pic.twitter.com/1zU6ZYfiqp

Mayor de Blasio took to Twitter to weigh in on the incident, taking a moment to express relief that no one was seriously injured and gratitude towards the first responders who arrived on scene.

Relieved to report there were no deaths or serious injuries after a helicopter incident on the Hudson river. Thank you to our first responders for your quick action. Please stay clear of 34th St and 12th Ave on the West Side so emergency response teams can complete their work. https://t.co/lrwJWuEW5A

Senator Schumer has also weighed in on the incident, calling for the National Transportation Safety Board to investigate the crash landing.

I am asking @NTSB to investigate today’s helicopter crash. Crashes in the Hudson demand their expertise.

And I thank the first responders who answered the call, and kept the pilot and the public safe.

I will continue to monitor as news develops.https://t.co/IqSJI5aK6F