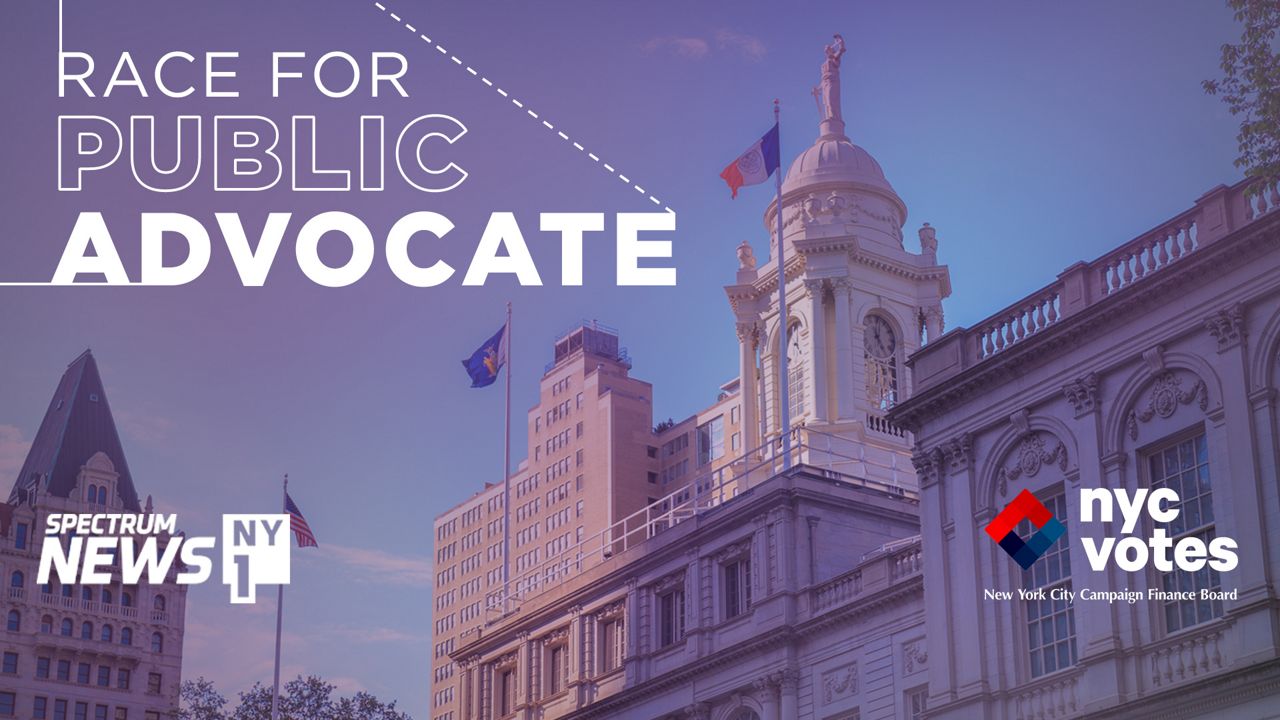 City Public Advocate Candidates Debate on NY1 Over Their Records in Office, Response to Amazon

Ten candidates for Public Advocate clashed Wednesday night over their support for Amazon building a campus in New York City, their legislative record on addressing the crisis in public housing, and if they support a plan to eliminate an admission test for specialized high schools.

Here we go! Almost time to begin our intimate 10-candidate debate for Public Advocate on @ny1! The fun starts at 7. This job has been a launching pad for @NYCMayor and @TishJames. Who will hold it next?? pic.twitter.com/SNSUhfI7pY

Ten candidates out of the 17 who are running qualified to participate in the debate at the CUNY Television Studios. Eight of those 10 are current or former elected officials.

NY1 will host a second debate with leading contenders in the race two weeks later on February 20 at the Borough of Manhattan Community College. NY1 is hosting the debates in conjunction with the city’s Campaign Finance Board, Politico New York, and several other co-sponsors.

The special election will be Tuesday, February 26.

The candidates overwhelmingly disparaged Amazon's HQ2 deal to bring a split of its new headquarters to Long Island City, along with the nearly $3 billion in tax incentives the corporation will receive, and criticized Mayor Bill de Blasio and Gov. Andrew Cuomo for agreeing to the deal without community input.

.@gracerauh asks @DawnforNewYork, "Do you think Amazon should not come here?" Dawn Smalls says she doesn't think the incentives that Amazon has put on the table already are enough. #NYCVotes pic.twitter.com/dVxkOTNCwX

Nearly all the candidates reiterated the concerns of advocates and protesters who have attended City Council hearings over the deal — that Amazon will abuse its workers, not enough of the jobs will go to New Yorkers, and there aren't significant guarantees to ensure the corporation invests in the local transit system, public housing, and education.

But candidates became divided over who was the most anti-Amazon person on the debate stage and lambasted those who signed an earlier letter calling for the online giant to move to the city. Queens Assemblymen Ron Kim and Daniel O'Donnell characterized some of their foes as naive for signing the letter without explicit guarantees of community input while knowing the company's deleterious effect on small businesses.

Some of the candidates who signed the letter, such as former City Council Speaker Melissa Mark-Viverito, claimed they were betrayed by the mayor and governor and were originally told there would be community input. Other candidates, such as City Councilman Ydanis Rodriguez and Assemblyman Michael Blake, didn't call for the deal to be completely scrapped but wanted it to be significantly reformed to force Amazon to invest more in the city.

Many of the public advocate candidates oppose the Amazon deal - but have they ever used Amazon? #nycvotes pic.twitter.com/RcCDmuqh4Z

For his part, City Councilman Eric Ulrich, the lone Republican running in the non-partisan special election, gave the HQ2 deal and the tax incentives a thumbs up. He noted they are available to other companies and argued the expected 25,000 to 40,000 jobs the deal would generate outweigh concerns.

Mark-Viverito's record came under attack by her opponents throughout the night, including her handling of the crisis at the New York City Housing Authority (NYCHA). For years, NYCHA tenants have complained about poor living conditions, such as lead, mold, rodents, and heat and hot water outages.

Assemblyman Michael Blake argued Mark-Viverito, who was council speaker from 2014 to 2017, failed to respond to the crisis.

Blake: The former council speaker said nothing has happened before. If her leadership were so great, we wouldn't be running for these seats and we wouldn't have to be working so hard. So the question has to be asked —

Mark-Viverito: Oh, give me a break, Blake.

Mark-Viverito: What has the state done?

Mark-Viverito denied that NYCHA wasn't a priority, saying she helped get the city to invest more funding into public housnig. At the same time, however, she claimed the city has been limited because the state and federal government haven't invested enough — a similar argument Mayor Bill de Blasio has used to defend his handling of the crisis.

On NYCHA, @MMViverito says "None of you were ever talking about NYCHA until this campaign." @RLEspinal responds by saying he was the first and only Council member to put capital dollars to fix the boilers in his district before they became a problem. #nycvotes pic.twitter.com/4fVA9ZBGIz

Looming over the NYCHA discussions was a recent deal to install a federal monitor and set requirements to fix chronic problems at the beleaguered housing authority. In part, that deal requires the city commit at least $2.2 billion in funding over the next 10 years to address issues at NYCHA buildings, such as lead paint, mold, and heating issues. NYCHA estimates it needs more than $30 billion. The city also is required to lead paint hazards, like chipped paint, in apartments with children under the age of six within the next few weeks.

Most candidates expressed reservations about the deal, particularly federal involvement, and demanded more federal funding. Activist Nomiki Konst argued the deal is the first step to the federal government privatizing the city's public housing stock, and City Councilman Jumaane Williams demanded tenants be involved in any plan. Ulrich and Blake, meanwhile, slammed NYCHA but both welcomed additional oversight, arguing falsified lead paint inspections are evidence the city has been unfit to be landlord to more than 400,000 New Yorkers.

Only Konst, Blake, and O'Donnell raised their hands when asked if they supported de Blasio's proposal to eliminate the Special High School Admissions Test (SHSAT), an exam required for eighth-graders to get into the city's eight specialized high schools. But all the candidates agreed with the broader goal of diversifying the elite schools, and said they want more funding for city schools.

O'Donnell and several of his opponents agreed with de Blasio's assessment that the exam shouldn't be the sole determiner for entry to the schools, with candidates like Williams noting that some students do not test well and high-stake exams aren't the only indicator of academic success.

Kim echoed sentiments by a group of Asian-American parents suing the city over the proposal, saying it is racially-motivated and would reduce the number of Asian-American students who attend the elite schools. Black and Hispanic students make up about 70 percent of the overall school system but represent just a fraction of the student body at the eight high schools. More than 60 percent of the students at the schools are Asian.

Ulrich and City Councilman Rafael Espinal, meanwhile, took a different path: They said they want reforms at the high schools themselves, calling for them to add more seats to match the demand and for the city to expand the number of specialized high schools.

WHAT ELSE WENT DOWN IN THE DEBATE?

If there was one candidate who separated himself from the field Wednesday night, it may have been Ulrich, if only because the lone Republican onstage took opposing stances from his opponents on everything from Amazon to Rikers Island, sometimes making waves in the process:

Williams also mixed it up when questioned about past statements that he was personally opposed to abortion and same-sex marriage.

"I'm not as polished as you, so I get that, and I don't have the flowery titles that you do," Williams said to Blake, who is the vice chair of the Democratic National Committee. "But I do tell the truth."

"How can I believe that you will stand on these issues that I feel so passionately about?" Mark-Viverito asked Williams later in the debate.

"I have been consistent in not only supporting a women's right to access safe and legal abortions, but fighting for them," the Brooklyn lawmaker responded.

WHAT DOES THE PUBLIC ADVOCATE DO?

Ultimately, however, none of the candidates will have much say on these issues if elected Public Advocate. While second-in-line to the mayor, should the mayor not be able to complete his or her term, it's a job with little real power and a vaguely defined mission. Essentially, the office functions as a city government watchdog and an ombudsperson for the public.

The Public Advocate investigates complaints and issues reports, and can also introduce legislation in the City Council, although he or she cannot vote on it. Current job: Assemblyman for 79th District in the Bronx, and vice chair of the Democratic National Committee.

Background: Worked for the Obama Administration.

One Thing to Know: Wants the Public Advocate to have a permanent seat on MTA Board​.

One Thing to Know: Wants the Public Advocate to introduce legislation to create more housing​.

Current job: Assemblyman for the 40th District in Queens.

Background: Worked for the City Council speaker and Spitzer and Paterson administrations.

One Thing to Know: Wants to transform the Public Advocate's office to cancel, monetize, or write down debt.

One Thing to Know: Says she would be willing to sue city agencies as Public Advocate.

Background: Served as a public defender in New York City for seven years.

Background: Co-founded a Washington Heights school and taught there for 13 years.

One Thing to Know: Supports bringing e-bikes and e-scooters to New York City.

Background: Worked in the Clinton and Obama Administrations.

One Thing to Know: Wants the Public Advocate's office to shine a spotlight on homeless women and kids.

One Thing to Know: Member of the Republican Party.

One Thing to Know: Wants the Public Advocate to be able to subpoena city government and vote in the City Council.

Non-debate candidates on the ballot

One Thing to Know: President Donald Trump supporter who has vowed to reform homelessness in the city, NYCHA, and the MTA.

Background: Ran in the Democratic primary for Public Advocate in 2017.

One Thing to Know: Wants to use the Public Advocate office to push for the Small Business Jobs Survival Act to, in part, create an arbitration system to help small businesses struggling with high rents in the city.

One Thing to Know: Wants to use the Public Advocate's office to pressure the city to improve living conditions for NYCHA tenants.

One Thing to Know: Wants revenue from potential marijuana legalization and congestion pricing to be given to city schools.

One Thing to Know: Supports helping homeowners pay any city liens and tax bills so they can keep their houses.

- NOTE: Latrice Walker will remain on the ballot despite ending her campaign and asking to be removed, the New York City Board of Elections ruled on January 29. Under law, the only way someone can be removed from the ballot is to die, be convicted of a felony, or move out of New York City.

One Thing to Know: Wants the Public Advocate to have subpoena and investigative powers, and be able to sue.

One Thing to Know: Pushing for a citywide initiative to teach New Yorkers about civics.