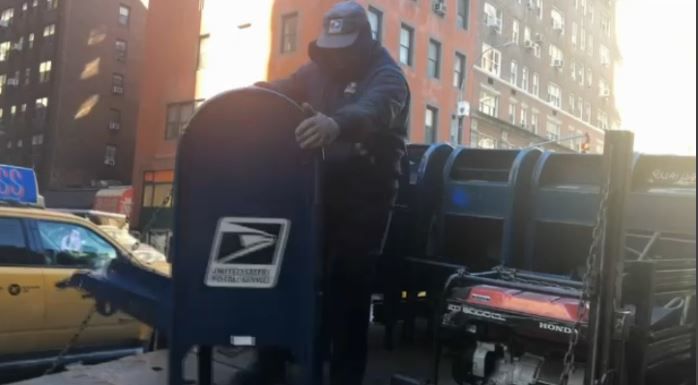 The venerable corner mailbox is changing. The new models have the same deep blue color and distinctive shape - but they have been redesigned to thwart thieves..

"The plan is to replace all the boxes across the city, all five boroughs. ... You will have the new, high security mailboxes, the Cadillac of mailboxes," says Donna Harris of the U.S. Postal Inspection Service.

The Postal Service already has begun installing the new mailboxes across the five boroughs; In Queens, 40 percent of the street boxes are new. Eventually, all of the more than 5,000 old public mailboxes in the city will be replaced.

The replacement plan is the result of a wave of thefts caused by "mailbox fishing."

"They take a string and a bottle; they can take a glue trap, a mouse trap, a rat trap and they drop it in and pull mail out of the mailbox," said Deputy Inspector Jessica E. Corey, the Commanding Officer of the NYPD’s Crime Prevention Division.

The goal is to find checks that crooks can forge by replacing the payee's name with their own. Dollar amounts are changed, too.

"They can take that check out of the mailbox and then they can do something called check washing where they take all the information you have on the check and erase it and they can put their own information on and cash it," said Corey.

Mailbox fishing began in the Bronx about three years ago and then spread to other boroughs as law enforcement tried to crack down.

"At first we were retrofitting the current boxes that were out there but then we realized we needed to have a solution to this problem that would be a permanent solution," said Harris.

The most visible change -- the wide mail chute that opens with a pull-down handle has been replaced by a narrow slot.
The redesign makes it more difficult for criminals to go mail fishing - but it also makes it impossible to use the boxes to mail packages or fat envelopes.

The change appears to be confusing some customers.

"I had to instruct a man about the proper way to get the letter into the new mailbox," said one man at the post office in Maspeth, Queens.

Postal officials say the only full-proof way of ensuring mail doesn’t end up in the wrong hands is to drop of letters and packages at the post office. But there are ways of minimizing the risk of theft even when using one of the old mailboxes.

“You can put mail in before the last collection time. That way your mail is going out that day and your mail is not sitting in the box on the weekend,” said Harris.