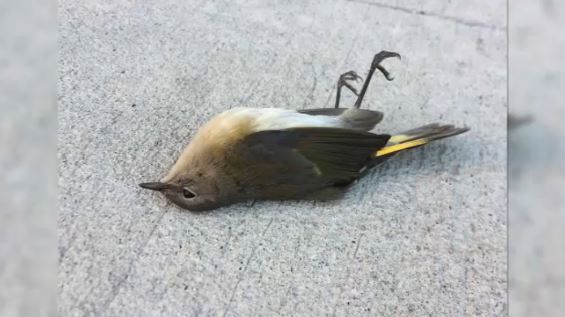 For birding enthusiasts, New York City is one of the best places to spot migratory birds.

"We essentially have this trap here. We've got light, it draws migratory birds in, they end up really concentrated in these small spaces," said Kaitlyn Parkins, a Conservation Biologist at NYC Audubon.

However, a stop in the city isn't always safe for winged travelers.

"There are almost a billion birds killed in the U.S. every year," said Christine Sheppard, Director of the Glass Collisions Program at the American Bird Conservancy.

The New York City Audubon estimates between 90,000 and 230,000 birds die in building collisions just in New York City every year.

It's happening often enough this year that some have begun to document the dead birds they find and posting the pictures on social media.

Some photos in the posts were taken outside of particularly problematic buildings.

A photographer captured images of many dead birds he found outside a condo complex in Harlem.

Another social media user posted a picture of a bird he said died after colliding with a company building near Columbus Circle on Sunday.

Experts believe that structures made up mostly of glass or with a mirror-like facade can pose a great danger to birds.

"Birds don’t perceive glass as a solid barrier…so when a bird gets close enough to a piece of glass, only to realize that its solid, it’s too late they are already flying into it," said Parkins.

There are property owners in the city who are trying to make a change.

"The Javits Center was a bird killer. It was a problematic building and they underwent the renovations…now we rarely have bird collisions at the Javits Center," said Parkins.

Both Parkins and Sheppard do advocacy work and outreach to encourage the retro-fitting of properties already built or under construction.

Still, there are building owners who've resisted their help.

"I think a lot of them don't think it’s a problem," said Parkins.

Others, according to Parkins, seem to ignore the issue all together.

There are things that everyday people can do to help even if they rent.

Homeowners also have a lot of options to help mitigate certain building designs.

"If you wanted to, you could just take post it notes and stick them all over the outside of your windows…You can put up decals if you have the correct spacing. What you’re trying to do is convince birds that there's a barrier they can’t fly through," Sheppard said.

The American Bird Conservancy offers a number of tips that can help keep birds from hitting buildings.

They said those numbers assist them in their research and advocacy efforts.