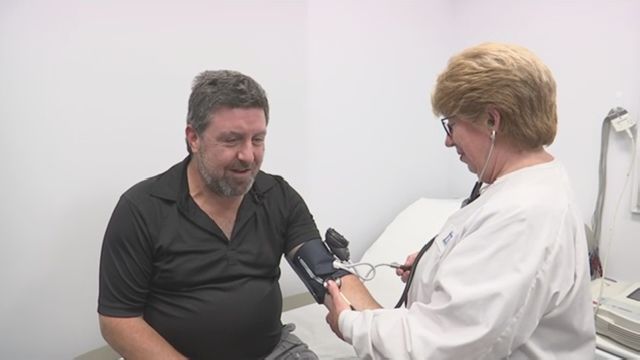 In the weeks after the September 11th attack, construction worker Tim Gleason was across the street from the World Trade Center trying to get the World Financial Center up and running.

The 53-year-old says he was once a smoker, but believes the toxic air he breathed is responsible for the prostate cancer he was diagnosed with three years ago and the chronic obstructive pulmonary disease he suffers today.

"What happened was it progressed from every now and then you would get sick," said Gleason. "And then the doctor tells me it's chronic bronchitis. You get a name and you think it's nothing. Then the next thing you know, five years go by and it's telling you have full-blown COPD."

On Wednesday, he was at the World Trade Center Health Program's new clinic in Lower Manhattan, going through a nearly two-hour health exam to determine if his illnesses were likely caused by the attack.

The clinic opened at the end of last month to ease a backlog of nearly 3,000 survivors who are waiting to find out if their diseases are 9/11-related and their treatment is eligible to be paid for by the federal government.

"Most of the time they'll need to see a specialist subsequently to nail down that diagnosis...to make darn sure that it is a bona fide condition that is qualified under the program," said William Buchta, the Chief Medical Officer for Logistics Health, the company hired by the federal government to run the clinic.

Since opening three weeks ago, the clinic has seen about 10 to 14 patients a day. Starting in October they want to increase that to about 35 a day.

Clinic officials say some patients have been waiting two years for an appointment, due to the growing number of people coming down with illnesses believed to be connected to the attack.

It's estimated more than 400,000 people lived, worked or studied in Lower Manhattan on 9/11 and in the months that followed.

"The applications keep coming in," said Buchta. "So we don't know where the end will be."

But officials say the clinic will be there for as long as needed.