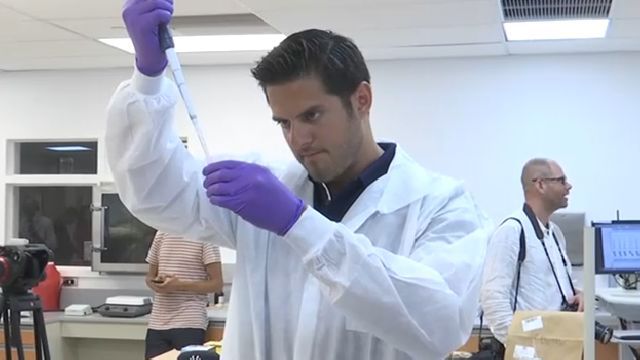 NEW YORK - Andrew Schweighardt is part of an elite team still trying to identify the remains of people who died at the World Trade Center on September 11, 2001.

He hopes his work can bring peace to hundreds of families including his own.

His 26-year-old cousin, Joseph Anchundia, is among the 1,100 victims who have not been identified. He says it's one of the reasons he became a forensic bone specialist.

There’s a part of me that still hopes that every sample that I test may be one day, I can provide closure to my loved ones.[[ who have lost a big part of our family that day," Schweighardt said.

All these years later Schweighardt says he has reason to be more hopeful than ever.

"Because the technology that we're working on 17 years ago has evolved and improved so much that samples that previously gave us no results, now we're getting full profiles from them," Schweighardt noted.

On Thursday, the Medical Examiner's Office provided a rare look at this work, allowing reporters into the lab where some of the 22,000 human remains from 9/11 are repeatedly tested every year.

They demonstrated the technology and machines that allow them to quickly obtain useable DNA samples from ever-smaller bone fragments. When enough genetic material is harvested it is compared against 17,000 DNA samples from the victims, or their families.

"We're ID'ing samples today that back in 2001-2002, that I never thought we would be able to do it," said OCME Department of Forensic Biology Assistant Director of Mark Desire.

Since the attack, 60 percent of 9/11 victims have been positively identified.

This year, the lab has made more than 100 positive DNA identifications from the remains of 9/11 victims. One of them was a first time match.

His name was Scott Michael Johnson. Like Joseph Anchundia, he was also a young banker.

"We at the New York City Office of the Chief Medical Examiner have not forgotten. We're still working tirelessly for those families trying to get them answers they deserve," Schweighardt said.