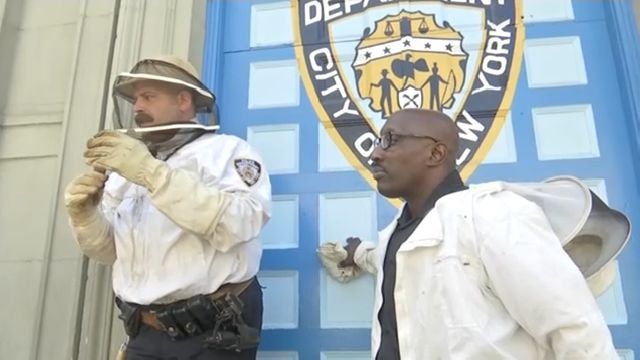 NEW YORK - When 30,000 bees descended on a hot dog stand in Times Square Tuesday the Internet was, well, abuzz - not just about the bees -- but also about the man who came to take them away.

"They’re our friends. Honeybees, you know, they’re cute, they’re fuzzy and they want to be around us! They’re part of our society," Lauriano said.

Officer Darren Mays is Lauriano's partner in the bee unit. He manned the @nypdbees twitter account during the Times Square swarm, happily setting all the bee haters straight.

Let me enlighten you. Honeybees are not hideous. They are the only insect that provides food for human consumption. Without them and any other pollinators, we wouldn’t survive. They life in a perfect society as opposed to human beings. https://t.co/rrriKDEC9Q

"It brought a lot of awareness and I think there’s a lot of people who wants to get in on it now. Just really wants to have their own honey and start their own colonies, so if they do that, then then they will have swarms and it will give us more work to do," Mays said.

The NYPD has had beekeepers since the 1990s. But the workload has risen as the popularity of urban beekeeping has grown. Swarms happen when an entire hive suddenly flies off, seeking new digs.

Lauriano and Mays keep hives outside their respective suburban homes. Their bee unit work is in addition to their regular police duties. But they see similarities in both assignments.

Swarming bees are in a panicked state, similar to many of the humans police officers interact with.

"When we first put the ladder in, I walked up the ladder without any protective gear on and I just wanted to introduce myself to the bees. I know it sounds kind of crazy but I just want to let them know, you know, I’m gonna be up here and we’re going to help you," Lauriano said.

Here’s an apiary where bees that are relocated and kept. We do take pride in removing and relocating our precious pollinators. Yes, the electric fence is to bear proof it from bears as well as curious human consumptionators. Did I just make up that word😂😂😂😂😂 pic.twitter.com/1MKuisgNI0

Mays keeps a hive on top of his precinct - the 104 in Long Island City - which means his fellow officers there are swimming in honey. Lauriano brought the bees he vacuumed from Times Square to his hives at home. He says they are adjusting bee-autifully.

"Fantastic. I checked on them, they’re settling in, I’m feeding them sugar water so they don’t have to go out immediately and start finding nutrition and they’re drinking it down," Mays added.

He’s hoping by next summer, officers at his precinct will be able to enjoy Times Square Swarm Honey with their toast.