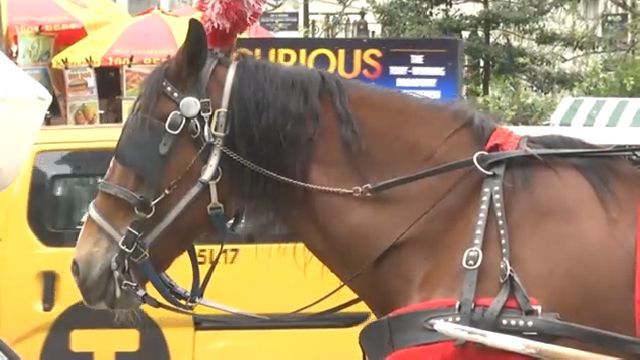 NEW YORK - On most days, you will find horse carriages lined up along Central Park South. But this New York tradition has drawn the ire of Mayor Bill de Blasio for years.

"Come on anyone with eyes to see knows there is a problem on Central Park South," De Blasio said.

#MorningsOn1 Poll: Does the mayor’s decision to move horse carriages inside Central Park seem like a move meant to...

On Thursday, the mayor announced the city would be moving those horses inside the park to pick up and drop off passengers.

Horse carriages would only be allowed to pick up rides at these five locations seen here in yellow inside Central Park.

"Horses in traffic is a bad idea. I said that in 2013. I would like to repeat it in 2018./We decided to do what government does. We saw a policy and put it into place," De Blasio said.

De Blasio has tried to regulate the carriage industry before. In 2013, he promised to ban the carriages on day one of his administration calling it inhumane.

In 2016, the City Council, at the mayor's urging, considered regulating the industry once more, negotiating with the drivers union as well.

"We had a good-faith agreement with them that was worked on for many weeks. And they didn't keep to their agreement," De Blasio said.

The latest move by the mayor can be done without the approval of the Council.

The anti-carriage group known as NYCLASS applauded the latest development. The group's founders are big de Blasio donors. Because of that, his motivation to get rid of the horses has always been questioned.

"We are really happy about the announcement today, which would really make life better for the carriage horses," said Edita Birnkrant of NYCLASS.

Meanwhile, owners in the carriage horse industry seemed blindsided. They were not told these new regulations were coming out.

The city has promised to get some public input on this latest proposal. It has scheduled a public hearing for October.