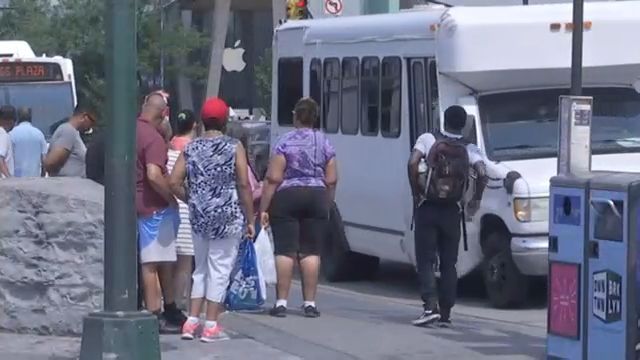 "The dollar van, you go wherever you want for two bucks. It works," adds another.

By law, as many as 782 dollar cans can operate in the city, but far more operate without approval. The Taxi and Limousine Commission says only 269 vans are licensed. According to the agency, its inspectors have issued more than 3,900 summonses this year to vans operating without the license.

The vans began operating during the 1980 transit strike, when enterprising New Yorkers offered rides to strangers for $1. The vans continue to flourish in areas not served by subway lines and poorly served by buses.

Now, the MTA wants to get some of those dollar van riders back, part of its broader push to reverse a more than decade-long decline in bus ridership.

The agency plans to redesign bus routes in each borough so they are better tailored to commuting patterns - and can better compete with dollar vans and e-hailing services like Uber.

"Why is it that people are using those vans? You cut off the supply, because increasingly, people flock back to the buses. That's going to take a bit of time," says NYC Transit President Andy Byford.

Some dollar van riders say there is a way for the MTA to win them back -- by giving them a break on the fare hikes that have been coming every other year.

Faster bus speeds and better spacing of buses - which the MTA says are also part of its bus turnaround efforts - would also help.

But some riders who depend on the dollar vans say it will be a tough sell.

"Look, I'm lounging right now, as compared to me being on a bus," said a passenger on a dollar van in Brooklyn.