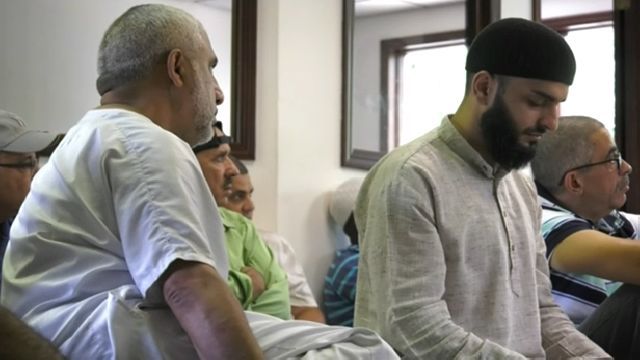 In the last presidential election, Donald Trump received nearly six out of every 10 votes there.

Karim Azzit, 26, grew up in nearby Tottenville, for years one of a few Muslim families there.

He prayed at a mosque on the other end of the borough.

Naeem Sheikh had a simliar experience.

“I live in Annadale and one mosque is like 45 minutes. The other one takes about more than a half an hour; 35 minutes," Sheikh said.

Located in a former real estate office, the Islamic Center of Staten Island has three floors of prayer space.

Friday services are so popular, they're offered twice - reflecting the growing Muslim community there.

"Every month a Muslim is moving here from Brooklyn," Azzit said.

But the center isn't there just to provide services for the Islamic community. Organizers are hoping to educate the greater community about what it means to be Muslim.

A viral video last month of an anti-immigrant rant toward a Muslim on Brooklyn-to-Staten Island bus raised questions about just how accepting some Staten Islanders are.

A security guard is always on duty at the Islamic Center.

And for a short time last winter, a police car sat outside during Friday prayers. But the extra security was quickly deemed unnecessary.

Khalid Usman says his children have struggled for acceptance at their Tottenville school.

"We not having kids making friendship with us, and we are feeling lonely, and even we sometimes feeling looks like danger; I said kids be positive, it's ok. You born...this is your country," Usman said.

Others who worship at the mosque say they are treated fairly by their neighbors. Azzit says he hopes the mosque helps to build relationships with the broader community.

"That's kind of our goal, is that the day that we face any sort of humiliation, or anyone tries to criticize us for anything or any sort of backlash, that our non-muslim neighbors are there to defend us before we have to defend ourselves," Azzit said.