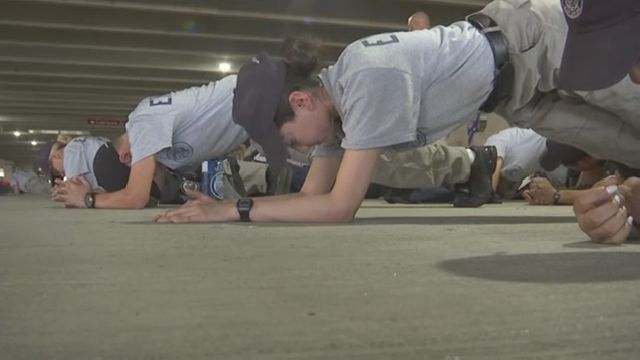 Inside a steamy parking garage on the Fordham University Campus, the Explorer Academy is in session.

Every summer, hundreds of young men and women from 14 to 20 years old take part in the free three-week training camp reserved for the most promising participants in the NYPD Explorers program, which is designed for young people interested in law enforcement careers.

"It's not like school, where they just make us sit in a classroom and just learn," NYPD Explorer Liseth Magano said.

This summer, there's a noticeable absence at the Explorer Academy. Lesandro "Junior" Guzman-Feliz, a 15-year-old from the Bronx who was stabbed to death in June, allegedly by a street gang in a case of mistaken identity.

"It's affecting the mood. Even at the national competition, it affected the mood as well when they mentioned it," NYPD Explorer Jeremiah Bosque said. "But you just have to stay strong. You have to keep moving forward."

When he was killed, Lesandro's involvement in the Explorers program was highlighted by the police commissioner. The program's directors say that has led to a surge in interest by teens wanting to become Explorers, too. They say applications are up by about 30 percent.

"We're seeing a lot more members and we're seeing a lot of families asking us about 'How do I get my son or daughter involved in the Explorers program?'" said Travis Smith, the Executive Director of Exploring Programs at GNYC Boy Scouts of America.

"That should encourage people because they want to be better, because he always wanted to be better," NYPD Explorer Oswaldo Hernandez said.

Like Lesandro, Joandry Arias is of Dominican descent. He says he feels connected to the late explorer.

"We are supporting him, as a person, as a part of us," Arias said.

Aside from sparking interest in law enforcement careers, organizers say a big goal of the Explorers program is to foster a better relationship between local police and the young people they serve.

Young people like Lesandro, who dreamed of becoming a detective. Now, maybe some other young people in the program will get that chance.