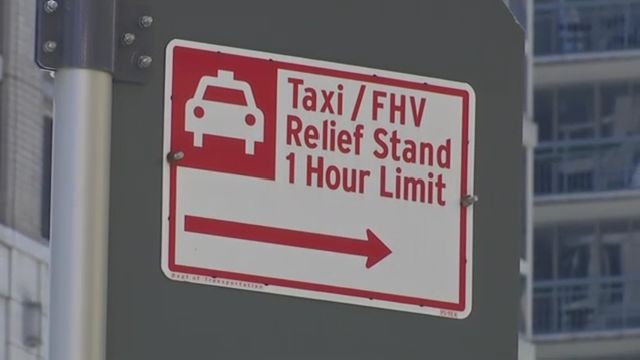 The driver of an Uber got into a wee bit of trouble this week after relieving himself in a bottle as a passenger sat in the back.

Uber dismissed the driver but he's getting sympathy from others in the for-hire-vehicle industry.

They say the case underscores just how rough it can be for Uber, Lyft and other for-hire drivers when nature calls.

"Pretty much, the city is the only one that can resolve this issue. And that's very easy - by just changing the signs and allowing the drivers to relieve themselves," said Aziz Bah of the Independent Drivers Guild.

The number of Uber, Lyft and black car drivers in the city is nearing 100,000. But there are fewer than 20 designated "FHV relief stands" in Manhattan where those drivers can park for up to hour to take care of their business.

"The number is multiplying very rapidly every single year. Yet, the relief stands are only 19," Bah noted.

And once drivers park at those relief stands, they have to count on the mercy of businesses that welcome them, like El Barrio Car Service on East 116th Street.

"You know, drivers are working 24/7. If they're driving in the wee hours of the morning, where do they find a bathroom when everything's closed? But they're still taking you home. This makes it very difficult for drivers," said Jose Altamirano of El Barrio Car Service.

There are far fewer yellow and green cab drivers but they have an easier go of it when they gotta go. The Transportation Department has set aside 38 relief stands for them in Manhattan.

Raichelle Carter's driver didn't wait for one of those stands Monday night as he relieved himself in a bottle at 40th Street and Seventh Avenue.

"After initially asking him what are you doing, and he's telling me that 'I'm peeing,' now I'm recording him. Because this is a safety hazard. It's all kinds of things that are wrong here," Carter said.

The Taxi and Limousine Commission said the driver "used poor judgement in his desperation."

But the agency acknowledged that "bathroom access is a real problem for drivers, resulting in health risks."

As for Carter, she says she's through with Uber and other ride-sharing services - at least until she feels more assured of her safety.