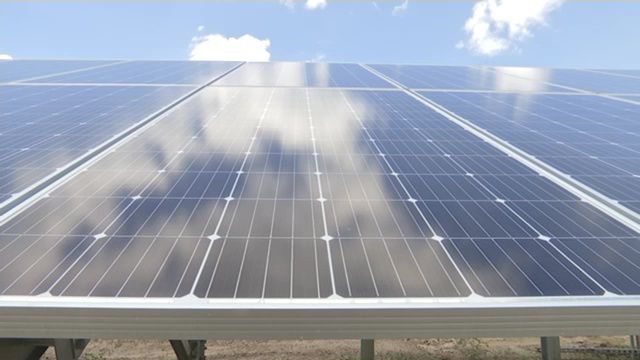 Across 10 acres, 9,000 solar panels are powered up on Staten Island.

It's the largest ground-mounted solar installation in the city.

Officials say it will put about 4 million kilowatt hours of electricity back into the grid -- that's enough juice to power about 500 commercial and residential properties across the borough annually.

"We're now creating clean, on-site electricity," said Peyton Boswell, managing director of EnterSolar. "For the next 25-plus years, no fuel, no feedstock. Sun comes up and clean electricity comes out."

The sun shining on Staten Island will help power two campuses in the Bronx, Fordham University and Fordham Preparatory School. The schools will purchase energy produced and used on Staten Island and will, in return, see a break in their electricity bill.

"The idea is, we can generate electricty and use that electricty on one location, this case in Staten Island, but allocate the benefit of solar production from an economic standpoint to another location, in this case Fordham University in the Bronx," Boswell said.

"This is a start, I think, of a great solar tradition that I hope will be here in New York City, particularly here on Staten Island," said Assemblyman Michael Cusick of Staten Island.

Officials say the project stands as a great model, proving that even in big cities with small spaces, you have the potential to make a big impact on the enviornment.