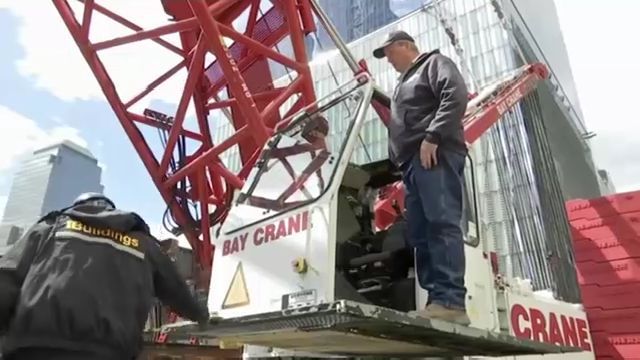 How the city has upped its crane safety efforts

NEW YORK - Tuesday's storms brought high wind advisories to the city causing the Department of Buildings to send out advisories to developers and property owners to secure construction sites and cranes.

That clamps down on production levels at construction sites, but sends about a dozen crane inspectors into high gear making sure rules are followed.

It’s a job with life or death consequences.

An investigation found a city inspector falsified records and a contractor used worn-out equipment to secure the crane. The contractor was charged with manslaughter but acquitted.

In May of 2008 on East 91st Street two construction workers died in another crane collapse.

As often happens after accidents, the Buildings Department stepped up inspections and violations nearly tripled in one year to more than 10,000 in 2009.

The number of citations spiked again last year to nearly 8,100 after a more than 500-foot crane in TriBeCa collapsed in February 2016.

Investigators say the operator recklessly tried to lower the boom in windy weather.

A judge also ruled the Buildings Department failed "to recognize" the "obvious shortcomings" of the operator's "unachievable" stowage plan.

Since then the city has increased safety regulations including: banning older cranes, mandating wind gauges wherever most cranes operate and requiring highly trained lift directors supervise all large crane operations.

The city also banned the kind of crane that collapsed in that lower Manhattan accident.