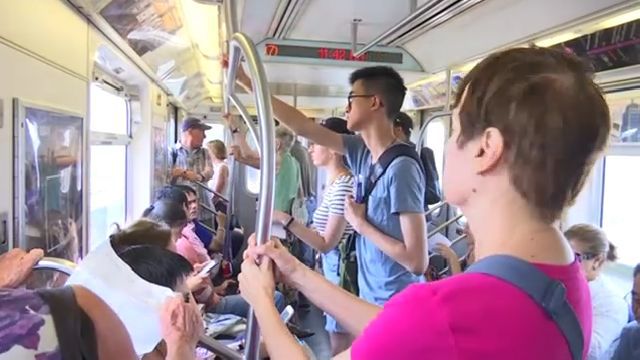 Passengers boarding the number 7 subway train are an everyday sight.

But this is not a typical train of straphangers, it's a tour group visiting the diverse neighborhoods along the line.

Jack Eichenbaum, the official Queens historian, has been leading tours of the borough for 20 years.

He leads the 7 train tour once a summer.

"When you get beyond the usual tourist destinations, this is an incredibly interesting place," Eichenbaum said.

The tour kicks off at 34th Street-Hudson Yards, at the far western end of the line.

Eichenbaum begins with a history of the 7 train.

First stop: Vernon Blvd-Jackson Avenue in Long Island City where the backdrop is a window into the neighborhood’s industrial past.

Everyone gets off for the first of six walking tours, each through a different neighborhood.

Jackson Heights, which is seeing a transformation from Latin-American immigrants to people from East Asia; Willets Point with its junkyards, chop shops and a certain baseball team; and Flushing, with its spectacular array of Asian cuisine.

The tour attracts New Yorkers as well as out-of-towners - from lifelong borough residents, to new Queens transplants to Manhattanites seeking something different.

"I thought it was a great opportunity to spend the whole day seeing various parts of Queens that I would probably never visit on my own," said Robert Sierakowski of Manhattan.

Eichenbaum provides a guide to sights and neighborhoods his tour does not stop to visit.

But stations bypassed this year might be on next year’s itinerary. With the borough constantly evolving, Eichenbaum says his tour must change, too.