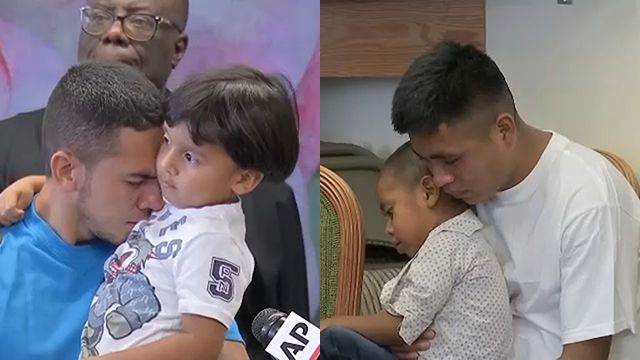 Holding his little boy tight and speaking through an interpreter Wednesday, Javier Garrido Martinez said every moment away from his son felt like an eternity.

"I had 55 days of not seeing him," the father said about his son.

The 30-year-old father from Honduras learned soon after crossing the southern border about the Trump administration's "zero tolerance" policy towards people entering the United States without authorization.

"When I came in, they took my biometrics and they told me the president changed a couple of laws," Martinez said.

His lowest moment was when a border agent suggested he would never get his four-year-old son back.

"I told him that someone might have adopted my child and that I would not be able to see him again," Martinez said.

They were reunited Tuesday, as part of a deadline requiring the administration to return children under the age of five to their parents.

Lutheran Social Services also helped 26-year-old Adan Gutierrez get his four-year-old son out of foster care after they made the journey from Guatemala.

"It's not right that they separated us," Gutierrez said. "There are still many that are not together with their children."

"Our case managers provide counseling in order to help them adjust," said Damyn Kelly, the president and CEO of Lutheran Social Services.

Both men said they want to give their kids a better life, urging other parents like them not to lose hope.

"Just pray to God. He's the only one," Gutierrez said. "Have faith, hopefully they can get reunited again."

Gutierrez did not disclose where his son's mother is, but Martinez said his wife remains in Honduras.

The Trump administration faces another deadline later this month, as the federal government has been ordered to by July 26 reunite all children separated from their parents at the southern border due to the "zero tolerance" immigration policy.